How do you decide which cryptocurrency is the best to invest in? One of the best measures is returns. If your money is increasing, it doesn’t matter if it was parked in Bitcoin or some altcoin.

The best strategy to invest in crypto assets is all about looking at past returns. The volatile crypto market can lead to high returns or deep losses, and hence no investment decision can be based on guesswork or feel-good sentiments alone.

The short for Cocos Blockchain Expedition, Cocos-BCX is riding the blockchain gaming wave.

Gaming is increasingly shifting to distributed ledger technology. So much so that we have platforms like Sorare, an NFT-based soccer game, and NBA Top Shot, which combines basketball with NFT. Cocos-BCX claims to provide multi-chain services to game developers to create and test any blockchain game. In the process, crypto assets can be obtained by developers and gamers.

With a market cap of nearly US$32 billion, DOGE ranks among top ten cryptocurrencies by market cap. Based on ‘Scrypt’ technology, its status was lifted by Elon Musk’s tweet, where he claimed to be working with developers of Dogecoin.

The merger of blockchain tech with gaming is yielding some great returns. Axie Infinity is another such game, which allows players to use Axie creature, an NFT.

The governance token of Axie Infinity is AXS, which has appreciated in value in 2021. The token allows users to take the control of game’s infrastructure and design in their own hands through voting process.

Conscious Value Network has a relatively humble market cap of nearly US$11 million.

It claims to bring efficiency to the decentralized ledger technology by using Layer 2 network. It uses the verifiable random function (VRF) with proof-of-stake as the consensus mechanism.

FTM is a member of multi-billion-dollar market cap crypto club. It works on bespoke consensus that it claims reduces the transaction speed on blockchain. 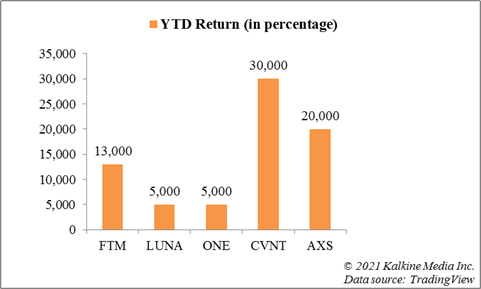 Fantom is a competitor to Ethereum’s blockchain in the field of smart contracts. It also facilitates DeFi and uses proof-of-stake as its consensus protocol.

LUNA is one of the fastest growing major altcoins of 2021. It relies on stablecoins to provide payment solutions. Price volatility is one of the pains in cryptocurrencies. Terra aims to eliminate it by using fiat currency-pegged stablecoins.

It is said to have partnered with a few payments applications and e-commerce platforms for wider use.

Harmony’s blockchain allows developers to build decentralized apps or DApps. It also uses the VRF to assign nodes in a random manner on its blockchain.

Harmony may likely become a cross-chain network in some time.

Popular cryptos may not be the biggest money makers. Bitcoin and Ether have gained in 2021, but the above seven altcoins dwarf their returns. The underlying tech of all has some unique features, for example blockchain-based gaming or smart contract infrastructure. A few may not be very well-known but they have so far done what their backers had expected – appreciating in value.