Lately, the NZ Government released its first emissions reduction plan to the public, to be on track with its commitment to go carbon neutral by 2050.

James Shaw, NZ’s Climate Change Minister, revealed that the said plan would help the country in lowering down its greenhouse gases across various sectors like transport, energy, agriculture, etc., thereby setting the direction for climate action through 2035.

Hence, the Government plans to put across a wide range of ideas that would enable carbon reductions and help in creating more employment opportunities.

For this, it is inviting feedback from various businesses, unions, Moari and local communities to propose new measures until 24 November.

With this overview, let us quickly get acquainted with the five popular NZ energy stocks that would pave the way for the country’s reduced emissions. 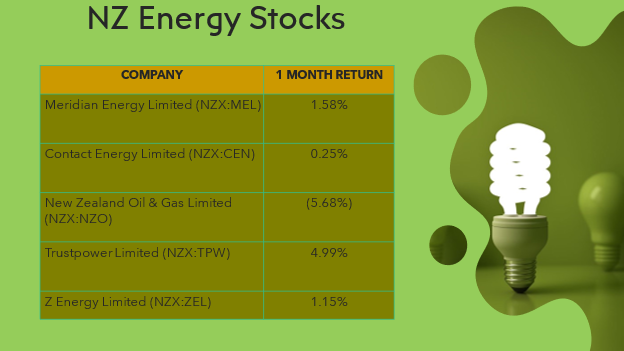 Based in Wellington, the leading electricity generator across Kiwiland is Meridian Energy Limited. The Company has recently announced issuing share rights to a select few Meridian employees pertaining to its Executive LTI Scheme.

The issuance of such rights is likely to be done on 21 October.

Related Read: Are these the 5 most active stocks on NZX?

Contact Energy Limited has been voted as the country’s most trusted energy provider for the year by Reader’s Digest. CEN has scheduled its Annual Shareholder Meeting 2021 for 10 November.

It is noted that the said meeting would be held online, wherein few resolutions like the election and re-election of directors are intended to be passed.

New Zealand Oil & Gas Limited is a petroleum exploration and production company. Today, the Company has announced the successful completion of its Kupe Compression Project.

Functioning as the country’s leading gas, electricity, and internet company is Trustpower Limited. The Company has intimated all its stakeholders regarding the clearance given by Commerce Commission to Mercury NZ Limited for acquiring TPW’s business.

Must Read: Are these 5 NZX mid-cap aiming to become large-cap stocks?

Apart from the grant of the Commission’s approval, obtaining shareholders’ consent by Trustpower was one of the other conditions for sale, which was approved in the Company’s ASM.

Meanwhile, the Company is likely to announce the replacement before the year-end.

Related Read: Has Z Energy (NZX:ZEL) agreed to the takeover deal by Ampol?

Energy stocks are the biggest contributor to the country's emissions; hence their support is vital for the nation’s commitments for a cleaner and greener future.