Mid-cap stocks are medium-sized companies having a market capitalisation between NZ$2 billion and NZ$10 billion.

These companies mostly outgrow their small-cap origins and are fast-growing. They have the potential to enhance their profitability and are less risky, unlike the small-cap stocks which are marked with high volatility, plus the slow-growing nature of the large-cap stocks.

That said, this article focuses on the five NZX mid-cap stocks having a tremendous possibility of becoming large-cap stocks. 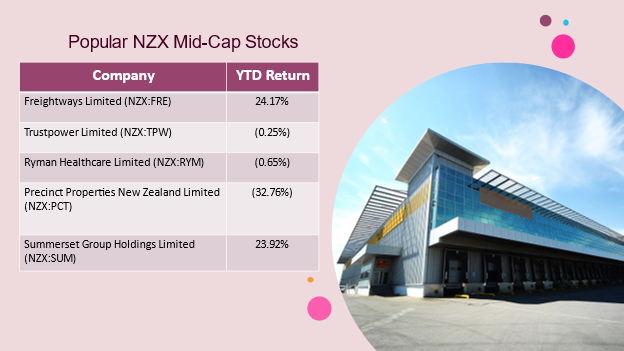 Freightways Limited is well-known for providing express package services throughout New Zealand and has a market cap of around NZ$2.14 billion. On 28 October, the Company has scheduled its virtual Annual Meeting of Shareholders.

Related Read: Which are the top 10 transportation stocks in New Zealand?

It is noted that FRE may conduct a physical ASM in Auckland if conditions permit.

Trustpower Limited is NZ’s leading electricity generator and retailer. TPW has a market cap of about NZ$2.4 billion. In its Annual Meeting, which was held earlier this week, resolutions for the election and re-election of various directors were passed.

Further, the Board has been granted authority to determine the remuneration of TPW’s auditors for the upcoming year.

NZ’s leading operator of retirement villages and rest homes is Ryman Healthcare Limited and has a market cap of nearly NZ$7.5 billion.

Recently, the Company has announced that Jeremy Moore, its Chief Development Officer, would move into a part-time role of New Zealand land acquisition manager.

It is noted that Moore was involved in the land acquisition of 31  RYM villages, hence his expertise would come in handy in his new role.

The Company has disclosed to organise its Annual General Meeting on 4 November and the last date of sending director nominations, recently.

Boasting of a market cap of around NZ$3.5 billion, Summerset Group Holdings Limited provides aged care services across throughout the country. The Company has been recently granted approval to build a retirement village in Waikato, costing more than NZ$150 million.

Initial works would start this year, while the early residents may move in by early 2023.

Apart from villas and cottages, the new village would comprise of a state of art memory care centre, serviced apartments as well as care rooms.

Mid-cap stocks might give substantial returns with moderate risk. These stocks are sandwiched between small and large cap, with a lot of potential to grow ahead.

GMT crypto soars 70%: Does this move-to-earn token has any future?