What is a promissory note?

A promissory note is a written agreement under which one party agrees to pay the other party a defined sum of money at a pre-determined date. These can be considered as, legal, financial document used to facilitate transactions.

A promissory note may come in handy when a person has lent money to another person. In this case the borrower must sign a promissory note stating that he will repay the amount at a specified period in the future. 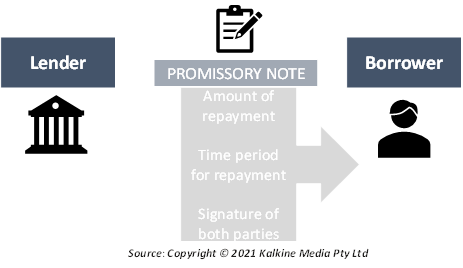 Put simply; a promissory note is like a promise to make a future payment by one of the parties in the agreement. This is one of the most used financial documents that people often sign while taking credit.

A promissory note may also be referred to as an IOU, a loan agreement, or a note. Issuing a promissory note creates a legal obligation for the borrower to repay the money at the mentioned time.

How does a promissory note work?

Unlike a normal agreement, promissory notes are legally binding. Such a note should contain all the terms and conditions that are to be followed under the agreement. A promissory note stands valid only when there is an exchange of money.

The note must also contain information regarding how much amount is to be repaid, which includes the principal amount lent along with interest charged over it. It also includes the details about the penalties, the consequences of default as well as the time frame within which the payment must be made.

Once all the conditional details are written, both the payee and issuer must sign the document. This now becomes a legal document or a legal promissory note that must be adhered to. This document remains valid till the time full payment is not done and the conditions have been met. When it ends before the condition is met, the only instance is when there is a mutual understanding between the parties. Promissory notes allow for the possibility of renegotiation.

What are the types of promissory notes?

Who can issue a promissory note?

Any person with sound legal knowledge can write a promissory note. However, it is advisable to hire a lawyer who can protect the lender from all potential loopholes in the agreement. This ensures that the agreement is secure and is legally binding.

Additionally, government-imposed laws may change how enforceable a promissory note is. Thus, the conditions being placed in the agreement should be made keeping in mind the government-imposed guidelines as well. One such guideline is the maximum interest rate that a lender can charge. The mentioned interest rates must reflect the fair market value. Hence it might be a good idea to hire a lawyer who is aware about these restrictions. Additionally, a tax professional may also be able to guide individuals on how much interest to charge.

How different are promissory notes from mortgages?

Additionally, promissory notes alone are not publicly recorded. However, in the case of a mortgage, every aspect of the loan is recorded in the public records. The promissory note is just a promise to repay the amount while the mortgage details the course of action once the payee defaults.

Has Australian economy begun to show impact of Omicron variant?

Walmart is ready to penetrate the Metaverse world