What is the long term debt to total asset ratio?

Long term debt to total assets ratio is a type of leverage ratio used to understand the financing mix of assets. Long term debt refers to financial debt obligations of over one year. The ratio helps in analysing a company's ability to repay its long term debt using its assets. As a result, a higher ratio means that the company is operating at a higher leverage and has higher financial risk. Financial risk refers to the ability of a company to repay its fixed obligations, which includes debt.

The following formula can be used to calculate the ratio 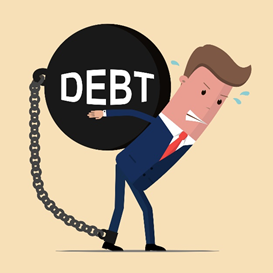 What is long term debt?

The numerator in the equation, Long Term Debt (LTD), refers to a company's outstanding debt with a maturity of 12 months or more. On the balance sheet, it is listed as a non-current liability. The maturity of long term debt may vary from 12 months to 30 years. There are various types of long-term debt, including but not limited to mortgage loans, bank debt, bonds, and debentures. Depending upon the style of reporting and accounting policies adopted, companies can choose to report long-term debt as a single line item that includes all the various types of long-term obligations or separate items for each type.

What is meant by the term total assets?

The numerator of the formula, Total Assets, is the value of the assets owned by the company. These are assets with monetary value that are used throughout time to provide a benefit to the owner. For a company, assets are recorded on the balance sheet. On the balance sheet, assets are also classified as either current assets or long-term assets. A current asset, such as receivables or a marketable securities, is expected to be liquidated within a year. On the other hand, a long-term asset, such as a fixed asset, is projected to last longer than a year. While the primary aim of owning long term assets for a company is to generate revenues, the proceeds from the sale of these can also be used to repay debt in case of an emergency or liquidation. Hence, the value of total assets is also used to measure the financial strength of a company.

What are the applications of long term debt to total assets ratio?

Investors, creditors and analysts frequently use the long term debt to asset ratio to analyse the amount of debt owed by a firm, its ability to repay such future financial obligations. For investors, this is crucial as a company that cannot repay its debt will end up being forced for liquidation and hence, they might not be able to generate returns on their investment. Additionally, creditors also use this ratio to decide whether or not lenders will provide future loans to the company.

Companies having a higher long term debt to equity ratio are more indebted and, as a result, are considered riskier to invest in and lend to. If the ratio continues to rise, it could signal a default in the near future.

While these are generic rules, the ratio also varies depending on the sector. For example, some asset-heavy sectors, like oil and gas, infrastructure etc. tend to be highly leveraged while specific other sectors tend to have lower leverage. Hence, the ratio must be compared with other peers while analysing a company.

Let us understand the ratio with the help of figures from the five companies listed on the table:

As can be seen, Company S has a significantly high degree of financial gearing vis-à-vis other peers shown in the table. Assuming other companies are from the same sector, this implies that lending to Company S might be much riskier compared to others, especially in a rising interest rate environment.

If faced with a recessionary environment, Company S might find it tough to survive when burdened with higher interest payments. Given the higher risk of default, lenders might also be more reluctant to lend to Company S. However, a booming environment could work well for the company as the financial leverage will magnify the returns earned by the company.

Understandably, Company P, which has no debt, will have the least risk. However, since debt is the cheapest source of financing, lower gearing results in lower returns. As a result, Company P will have the lowest returns amongst its peers, assuming all other factors are constant.

The median and the mean leverage of the sector are around 40%, which shows that the companies in the industry use leverage modestly to accentuate the profits. Companies Q and T seem to be moderately leveraged as a result. The use of moderate leverage boosts shareholder returns while default risk also remains manageable. In other words, the use of moderate gearing balances the interests of both the investors as well as the creditors.

Why is Fisher and Paykel Healthcare (NZX:FPH) in news these days?

What is ETF investing? What retirees can do

Check out ASX shares with over 20% gains in August