Financial analysts typically measure the fixed cost of a company to calculate its leverage as it often acts as a fulcrum for the company’s earnings.

The use of leverage typically magnifies the earnings of a company in both the positive side and the negative side; thus, in turn, increases the average risk of a company.

Leverage as a financial tool is typically used by both investors and companies to magnify the return profile of an investment.

Why is Understanding Leverage Important?

Leverage is a financial tool studied in capital budgeting analysis as the extent of leverage is a major deciding factor in determining the risk and return profile.

Furthermore, financial analysts typically discern information to reach a recommendation of buy/sell/hold by analysing management’s discussion on its operating and financial leverage.

Additionally, the valuation process requires the forecast of future cash flows while assessing the risk concerning the same and understanding the leverage for doing the same is a vital process.

The use of leverage ideally increases the volatility of future cash flows; thus, it is a decisive factor in determining the risk as well. The leverage of a company ideally depends on the amount of fixed cost (or debt).

For example, suppose there are two companies A and B with the following cost structure: 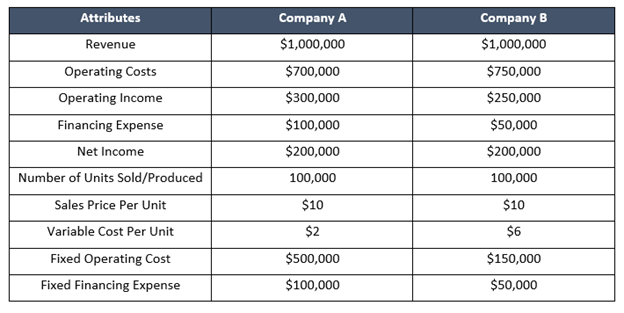 Thus, the net income and future cash flow for Company A would vary considerably as compared to Company B with the change in the number of units produced.

The higher variability in the net income of Company A with respect to the number of units produced/sold is relatively very high as its fixed costs, i.e., fixed operating cost and fixed financing cost are relatively high as compared to Company B.

Busines risk of a company is ideally defined as the risk associated with operating earnings and is usually subdivided into two major categories, i.e., sales risk and operating risk.

Sales risk is the risk that a company would face concerning the price and quantity of the goods and services.

Operating risk is ideally identified as the risk concerning the operating cost of a company, in particular, the fixed cost.

In simple terms, companies having a high fixed operating cost cannot adjust to the change in the number of units/service sold; thus, are more susceptible to volatility in operating earnings.

The volatility in operating income with regards to the change in the number of units sold and fixed operating cost could be measured by the Degree of Operating Leverage (or DOL).

Just like operating risk, the financial risk is the reflection on the fixed financing cost and more the fixed (debt) obligations a company has to pay, the more would be its financial risk.

Financial risk can also be quantified in the same way as the operating risk in terms of the Degree of Financial Leverage (or DFL).

As financial leverage is more dependent upon the discretion of a company as compared to the operating leverage, that usually remains same for companies in an industry group, companies with higher tangible assets to total assets might be able to use higher Degree of Financial Leverage.

In simple terms, having more tangible assets provide creditors with higher confidence of recovery in case of a default, allowing them to extend large amounts to such companies.

Total leverage of a company is the function of its operating leverage and financial leverage. The quantified factor which captures the same is the Degree of Total Leverage (or DTL).