What is a Housing Bubble?

A housing bubble occurs when the prices of real estate or housing rise at an increasing rate because of increased demand and lack of adequate supply. This may also occur when there is emotional buying in the markets.

Once this rise in price is realized by the market players, the bubble tends to rise further as more buyers enter the market. However, investors and speculators are aware that the prices would eventually come down as the property market gets overvalued. Thus, this phenomenon was given the name of a “bubble” as it is eventually expected to burst.

How does a housing bubble occur?

There are various factors that contribute to a housing bubble. During the boom phase in the economy, usually households have more money to spend. With greater disposable income, people may spend more on housing. 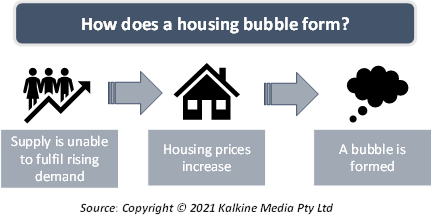 Thus, people are willing to take on debt during such an expansionary phase. Additionally, if interest rates are low then consumers are tempted to buy more on credit. Thus, the economy develops a greater appetite for risk. This can quickly lead to the economy spiraling out of control.

At such a time, there can be high levels of speculation and risky behavior. This can eventually lead to a sharp rise in prices. Thus, an inflationary pressure sets in on the real estate prices.

How do market players become aware of the bubble?

The benchmark is only an estimate based on a collection of variables affecting the supply, demand, and price of the commodity. Some of these variables may include population growth, average income, average household size, etc.

It may be difficult for different speculators to reach a common ground while determining the threshold price of the commodity/asset. However, there are certain methods that are acceptable by a majority. One such method is finding long run averages based on the historical data. If asset prices overshoot these averages or the trend, then there may be a bubble present in the economy.

However, any small spike in asset prices may not directly be termed as a bubble. It is only when the asset prices reach outrageous levels that speculators and investors declare that a bubble is persisting in the economy.

Is it possible to predict a housing market bubble?

Most bubbles, including housing market bubbles are only discovered in hindsight. Thus, it is extremely hard to predict when the next bubble might arise. However, there are always some warning signs that can be paid attention to.

Economists have tried to base this estimation on certain indicators that can help identify bubbles in specific areas. The first step is comparing current prices to the prices seen during historic boom cycles. This lays out an idea about whether the current prices are showing a similar trend as before or not.

There are other indicators falling into two broad categories: valuation and debt. Valuation is done by finding out the price to income ratio to determine the percentage of income people must pay to buy a house on credit. Whereas the debt side is measured by finding out the debt-to-income ratio or the total cost of home ownership relative to a family’s income.

What impact does a housing bubble have on the economy?

A bubble can affect the real estate markets, personal wealth, and the economy overall. Bubbles can make everyday items more expensive, as well as rack up the prices of mortgages. Consequently, homeowners may be compelled to dive into their retirement plans.

The housing bubble, once it pops, can cause severe damage to all sectors in an economy. As people are trapped in the bubble, they keep expecting prices to go on increasing. Thus, people may end up buying more than what they can afford.

How does such a housing bubble pop?

The pop eventually comes when increasing supply remains unmet by decreased demand. Due to consistent growth in the home prices, buyers now become wary of paying higher amounts. Additionally, many homeowners end up borrowing more than what their house is actually worth.

Thus, when prices start to slide, homeowners may realize they have landed in a debt trap which becomes extremely hard to come out of. This can lead to increased foreclosures, which drives the housing prices further low. Due to increased risk-taking, the economy enters a saturated space where it can no longer cater to the increasing supply.

Once the bubble pops, investors can buy when prices reach their lowest. This would allow investors to buy more property for a given amount of money.

What is an example of a housing bubble?

The most prominent housing bubble was the one observed in 2007-08 crisis. The real estate bubble had begun during the early 2000s and came to a crash during 2008. Housing prices had shown a peak in early 2006, which eventually started to subside in 2007.

However, the full effect of the crash was visible in 2012 when prices reached rock bottom. During the coronavirus pandemic, prices seem to be overvalued in various states within the US. However, it is difficult to estimate when such a bubble of would again be seen in the county.

Two mortgage-related stocks to look at in October

What is TFSA in Canada? All you need to know

What to look for when buying wow classic gold

Home buyers with mortgages to lose buying power next year