What is cost-push inflation?

What is aggregate supply?

The relationship between the general price level in the economy and its production level is known as aggregate supply. Because the amount supplied increases as the price rises, the short-run aggregate supply curve is upward sloping as shown below. 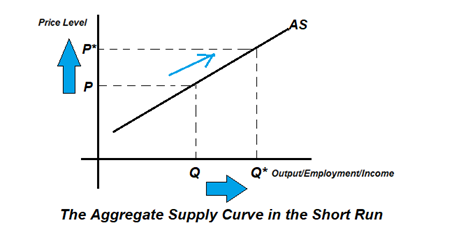 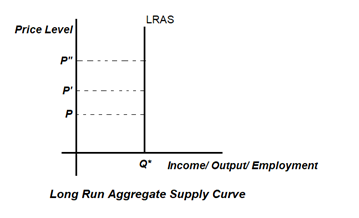 What is the impact of cost-push inflation on the economy?

The concept of cost push inflation can be explained with the diagram given below. Initially, the economy is at equilibrium at the AD and SRAS curve intersection at output level Q and price level P.  In the diagram, when wages increase or there is a rise in the cost of raw materials, the cost of production increases. To maintain their profit levels, the producers cut down the number of workers employed and raise the prices of their products. As a result, the aggregate supply in the economy decreases. As a result, the aggregate supply curve shifts leftward, as shown in the movement from SRAS to SRAS'- this results in a rise in price levels from the initial level of P to now P’ and also a decline in output and employment levels in the economy as shown in the movement from Q to Q’. The upward movement in price levels in the economy by PP' is called cost-push inflation. 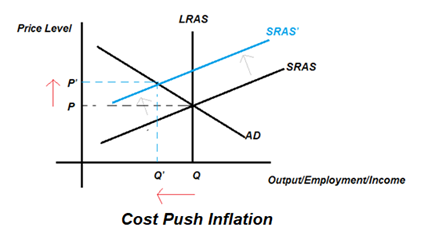 Cost push inflation is triggered in the economy due to factors that increase the suppliers' cost of production and thus impact their profit margin. The cost of production rises as workers seek higher wages. Wage push inflation was common in past times when there was a greater reliance on human labour since technological growth had not yet reached the heights it has now. As a result, labour unions wielded enormous power. The unions' call for a strike had the potential to impede production. Thus, management took their demand seriously. In earlier times, wage push inflation in the economy surged due to labour union pressure when management boosted salaries for workers. Government policy to raise minimum pay for workers is another probable driver of wage push inflation.

Cost-push inflation can also be induced by an unexpected increase in the price of imported goods. For example, when a home currency depreciates, the cost of importing the same amount of commodities increases.

Similarly, adverse weather, a lack of or excess rainfall, insufficient fertiliser supplies, or subsidy reductions push costs up in agricultural markets. All of these factors affect industries that use farm goods as raw materials.

What can be done to control cost-push inflation?

The government might use a deflationary policy like increased income tax or reduced spending to control inflation. The central bank might also consider raising interest rates- this would raise borrowing costs while reducing consumer spending and investment. However, while employing any measure, the government must be sure that the output and employment levels in the economy do not experience a severe decline. Better supply-side measures that help to enhance productivity and shift the AS curve to the right could be the long-term solution to cost-push inflation. These policies, however, would take a long time to take effect.

Why is it essential to control inflation in an economy?

Inflation wreaks havoc on economies by influencing investment and business decisions. Rising inflation widens the difference between nominal and real interest rates. Inflation, on the other hand, also decreases people's financial savings. Further, in expectation of future price hikes, producers and suppliers may not release stock commodities. Finally, the most severe risk associated with inflation is that it may spiral out of control, wreaking havoc on the economy due to hyperinflation. Therefore, when the economy's inflation rate starts to rise, it's critical to keep it under control.