With the aim to tap the lucrative rare earths opportunity, Australia-based Greenland Minerals Limited (ASX: GGG) is focussed on the Kvanefjeld Rare Earth project in south west Greenland. When developed, the project would be a large-scale, low-cost, long term supplier of products- at the centre of the unfolding revolution in the efficient use of energy.

In late June 2019, the Company had lodged with the Government of Greenlandâs (GoG) Mineral License and Safety Authority (MLSA) an application for an exploitation (mining) license for the Project, including an Environmental Impact Assessment (EIA), along with a Social Impact Assessment (SIA) and a Navigational Safety Investigation study (MSS).

The updated EIA was the culmination of a programme of work which began with stakeholder consultations and workshops with government agencies in 2013.

The supporting documents were prepared by independent expert consultants and lodged in Greenlandic, Danish and English.

What followed is a milestone for GGG and the Project:

An update from the GoGâs Environmental Agency For Mineral Resources Activities (EAMRA) and EAMRAâs principal external advisers, the Danish Centre for the Environment (DCE) depicts significant progress towards finalising the thorough and detailed process of the EIA, providing confidence to Greenland stakeholders and regulators.

Positive Developments Regarding the EIA Review

On 22 October 2019, GGG received structured comments on the EIA from EAMRA, which it believes outline an approach to finalising the EIA and thereby moving to the next phase of the licensing process, which would be formal public consultations.

EAMRA has separated outstanding environmental issues into two categories, Type 1 and Type 2, to bring the EIA approval process closer to permitting practices in other countries where issues relating to final design, engineering and construction are not salient to significant environmental risk, and are dealt with in the final approvals process: 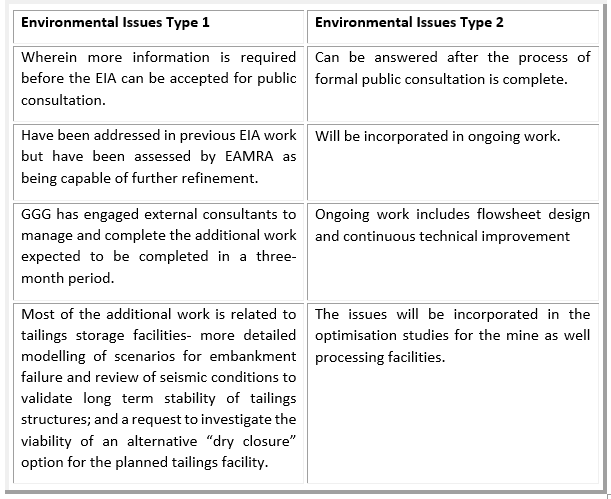 In June 2019, the International Council on Mining and Metals, the Principles for Responsible Investment and the United Nations Environment Programme co?convened a global tailings review to establish best global practices on tailings storage facilities. This review is expected to be completed by the end of 2019.

GGG considers it best for its plans for tailings to be tested against the highest standards and acknowledging the same, has begun a review of the design and operations of tailings management at Kvanefjeld to ensure compliance with updated standards.

Moreover, meetings are planned with EAMRA and the DCE in order to finalise the EIA in a timely manner, as the Company looks forward to providing updates as the additional studies conclude and a schedule is formed for a public consultation.

The GGG stock ended the dayâs trading session at $0.100 on 22 October 2019 with a market capitalisation of $119.1 million and approximately 1.19 billion shares outstanding. In the past six months, the stock has delivered a return of 40.85%.

As stated by Dr Mair, after several years of working closely with the Greenland regulators and their advisers, the range of outstanding issues has been significantly narrowed with clear guidance provided to close out the outstanding items.

While the market awaits the upcoming progress for Greenland Minerals, we encourage you to read more about the Kvanefjeld rare earth project developments HERE.

Tags:
Mining ASX: GGG
All pictures are copyright to their respective owner(s).Kalkinemedia.com does not claim ownership of any of the pictures displayed on this website unless stated otherwise. Some of the images used on this website are taken from the web and are believed to be in public domain. We have used reasonable efforts to accredit the source (public domain/CC0 status) to where it was found and indicated it below the image.