Australian iron ore mammoth Fortescue Metals Group Limited (ASX: FMG) posted a bumper financial performance for the year ended 30 June 2019. The improved operational efficiency led the company to flag a net profit after tax (or NPAT) of US$3,187 million, up by 263 per cent from FY2018.

Apart from higher efficiency, an increase in realised price also boosted the profit margins of the company, and despite a 1 per cent decline in the quantity of shipped ore, FMG total revenue witnessed a 45 per cent increase in FY2019.

The shipment witnessed a minor fall of 1 per cent; however, the product mix marked a decline in product blends.

The higher realised price of iron ore during the second quarter of the calendar year 2019, coupled with an increase in shipment of high-grade product such as West Pilbara Fines propelled the revenue in FY2019.

The iron ore products witnessed a demand surge in China during the second quarter of the calendar year 2019, which in turn also supported the company’s product demand, and in a loop- the revenue.

While the demand of iron ore in China remained robust during the second quarter in CY2019, the supply chain was disturbed over the impact of the Tropical Cyclone Veronica at the Pilbara Region, which disrupted the operations of ASX-listed iron ore miners and also caused slower delivery from the Port Hedland.

Over the supply disruption, the iron ore price benchmark zoomed in the international market, and FMG’s products such as the Fortescue Blend and Super Special Fines followed the same trajectory.

The cash operating cost (or C1) averaged at US$13.11 per wet metric tonnes in FY2019, which was 6 per cent higher as compared to the previous corresponding year. FMG mentioned that the cash cost witnessed an increase amid high fuel cost, improved wages and due to longer haul distances.

FMG allocated US$2.4 billion capital for FY2020 and distributed the expenditure as:

FMG declared a final fully franked dividend of A$0.24 a share, which in turn, took the total yearly dividend to A$1.14 per share.

The dividend of the company witnessed a yearly growth of 396 per cent in FY2019. 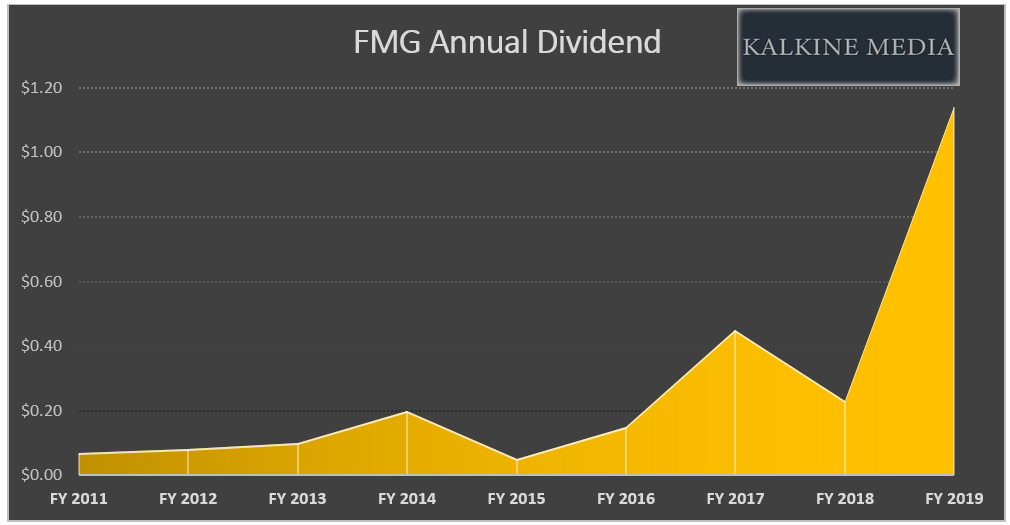 The yearly dividend of A$1.14 represented a pay-out ratio of 78 per cent, and FMG kept the dividend distribution guidance for FY2020 in the range of 50 to 80 per cent of the full-year NPAT.

The total returns delivered by FMG over the long and short-term are:

On the daily chart, the shares rallied from December 2018 till July 2019 amid an increase in iron ore prices. During the starting of the rally, the trading actions generated a golden crossover (bullish signal) of 21- and 200-days exponential moving averages.

However, the prices corrected by almost 50 per cent of the primary rally, which started in December 2018, and is now forming an ascending triangle on a daily chart. The primary support for the shares is at its 200 days EMA, which is at A$6.786.

The prices rose slightly in the previous few trading sessions, which in turn, dragged down the short-term EMA of 21 days, which would now act as the primary hurdle for the share prices of the company.

The breaking of the triangle either up or down would decide further price action of the shares. Meanwhile, the major hurdle for the prices is intact at A$8.005.

On projecting the Fibonacci, the prices have taken a turnaround from the 38.2 per cent level; however, the projections from the Fibonacci remains intact until the share price crosses the low of the candle marked as 2 on the chart shown above.

Investors should monitor the levels mentioned above carefully and should also follow the development of the triangle formation to gauge the price direction ahead.