Is the Bull Rally for Gold and Iron Ore Miners Ending?

On 13 August 2019 gold prices tumbled in the international market post the announcement from the United States over a delay in 10 per cent tariff rise on certain Chinese goods such as cellphones and laptops. The official announcement from Washington led the long-holders to quickly cover the position in the international market, which in turn, slightly dragged the gold prices down.

The official statement made by the Chinese Ministry of Commerce pointed towards the re-negotiating of the trade talks between the United States and China, which in turn, led the long holders to cover their position.

Apart from that, the gold market witnessed a slight increase in short position over the gesture, which could further settle the trade tensions. Due to the profit booking and slight short build up, gold prices cracked slightly in the international market.

Albeit, the fundamentals of gold and silver market remains strong, the market analysts are anticipating some possible correction in the gold prices before gold could finally leap over US$2000 mark.

However, despite strong performance, the Australian gold miners have felt the shock of the sudden considerable decline in gold prices and some miners such as Saracen Mineral Holdings Limited (ASX: SAR), St Barbara Limited (ASX: SBM), and Northern Star Resources Limited (ASX: NST) had marked a gap down opening along with a plunge in share prices yesterday (14 Aug 2019).

The share prices of the company witnessed a gap down opening on 14 August 2019, and the shares started the session on that day at A$3.760, down by over 4.80 per cent as compared to its previous close on ASX.

NST shares witnessed a gap down opening on 14 August 2019, and the prices started the session on that day at A$12.900, down by 1.30 per cent as compared to its previous close on ASX.

The market seems to be discounting the estimated pending correction in the gold prices, which in turn, is exerting pressure on the share prices of the Australian gold miners.

While the gold miners are moving down, the iron ore miners on ASX are reacting to the drop in iron ore prices.

The iron ore prices are on a fall despite lower supply amid weakening demand from the steel mills. The ports stockpiles across the 35 significant Chinese ports stood at just 107.84 million metric tonnes till 9 August 2019, despite that the prices felt the heat over falling demand of iron ore.

The steelmakers in China’s Shandong province decided to slash the production of steel product including wire rod and rebar by 400,000 metric tonnes on 13 August 2019, which in turn, supported the steel prices in China.

However, the decision by the steelmakers impacted the demand for iron ore, which in turn, exerted pressure on iron ore prices. The recent stance of CISA is also contributing towards the fall in iron ore prices.

The fall in long steel inventory in Guangzhou province in China also contributed towards the rise in steel prices, and as per the data, the steel stocks in the provinces declined by 7.01 per cent as compared to the previous corresponding week to stand at 868,000 metric tonnes (as on 14 August 2019).

The inventory of steel rebar in the provinces shrank by 7.69 per cent as compared to the previous corresponding week to stand at 491,000 metric tonnes (as on 14 August 2019). 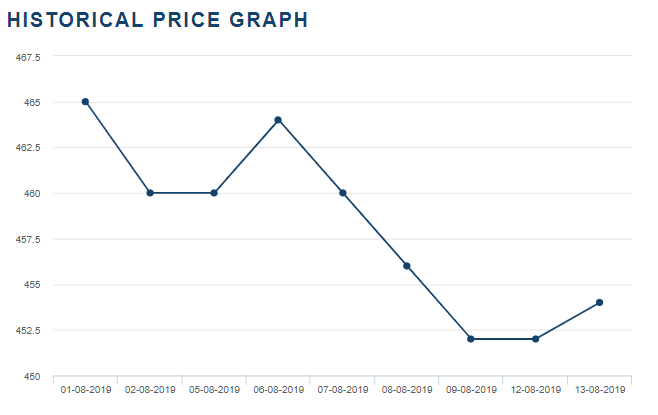 Likewise, the prices of steel rebar October futures on SHFE in China settled 2.39 per cent higher or at RMB 3677 on 13 August 2019 as compared to its previous close.

If the recent efforts of China and the United States lead toward the fresh round of trade talks, it could provide some cushion to the steel prices, which in turn, could prompt the steel mills to ramp up the steel product production.

The steel mills could increase their production to capture the profit margins of high steel prices in the international as well as in the domestic market of China, which in a loop could support the demand and prices of iron ore in the global market.

Post considering the current supply scenario if the steel mills engage themselves in the aggressive procurement; it could support the iron ore prices in the near-term. The market analysts are expecting high production of steel from China in August as the regulations ease in China, which in turn, could further fan the iron ore prices.

However, the potential risk of trade tussle still hovers above the commodity prices.

Over the fall in demand and weakening prices, the iron ore miners on the Australian Securities Exchange have lost significant value.

The fall in iron ore prices contributed significantly towards the fall in the company’s share from its 52-week high. While FMG is taking a down stroll, the other iron ore miners such as BHP Billiton (ASX: BHP) and Rio Tinto (ASX: RIO) are following the same trajectory.