This article talks about five such companies listed on ASX, and a few on NZX (New Zealandâs Exchange) as well. Some of these companies are actively unlocking the renewable energy potential for a sustainable future. The focus on renewable energy is entirely justified when the world is pushing for lower carbon emissions.

In this article, we have also discussed the full-year results provided by these companies very recently, and some material developments related to the companyâs business. Also, on 30 August 2019, S&P/ASX 200 Utilities (Sector) index was at 8,005.7 slightly up 0.53% or 42.3 points from the previous close. Concurrently, the S&P/ASX 200 was up 96.8 points at 6,604.2 relative to the prior close.

Recently, on 28 August this year, the company notified on the agreement to lease 120MW of open cycle gas turbine equipment from the South Australian Government for 25 years, starting from May 2020. Subsequently, the development allows the company to increase electricity sales to Commercial & Industrial customers in the National Electricity Market.

Reportedly, the capital expenditure associated with the transaction is budgeted at $55 million, which includes relocation, civil works, gas connection, electricity connection and equipment installation. In addition, the company would be making annual lease payments of $5.02 million per year. 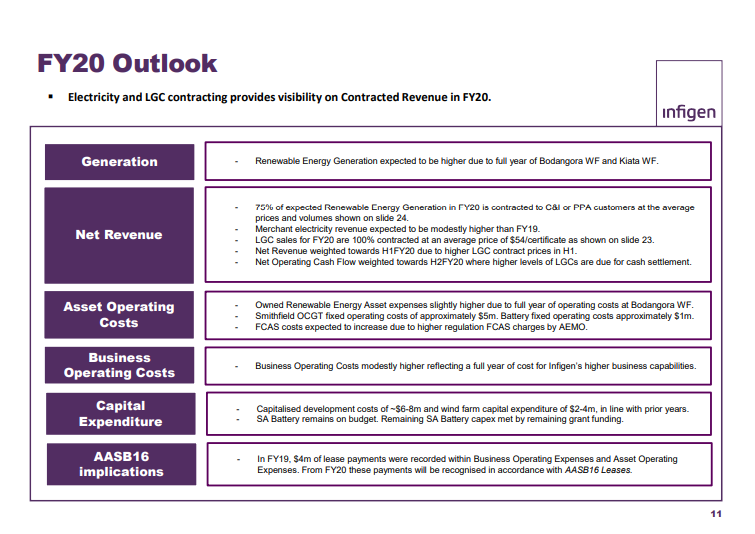 Meanwhile, the commissioning of the SA battery, and progressing Flyers Creek Wind Farm in NSW towards financial close would be emphasised as well. It is expected that business operating costs would increase given pipeline in development.

Domiciled in New Zealand, Tilt Renewables is engaged in the development, ownership and operating of electricity generation facilities. It is also engaged in trading electricity and associated products from renewable energy sources.

Recently, on 28 August 2019, the company had approved the investment decision for a wind farm. Reportedly, it gave a nod for the investment, to be made in the one hundred and thirty- three MW Waipipi Wind Farm, earlier known as the Waverley Wind Farm. 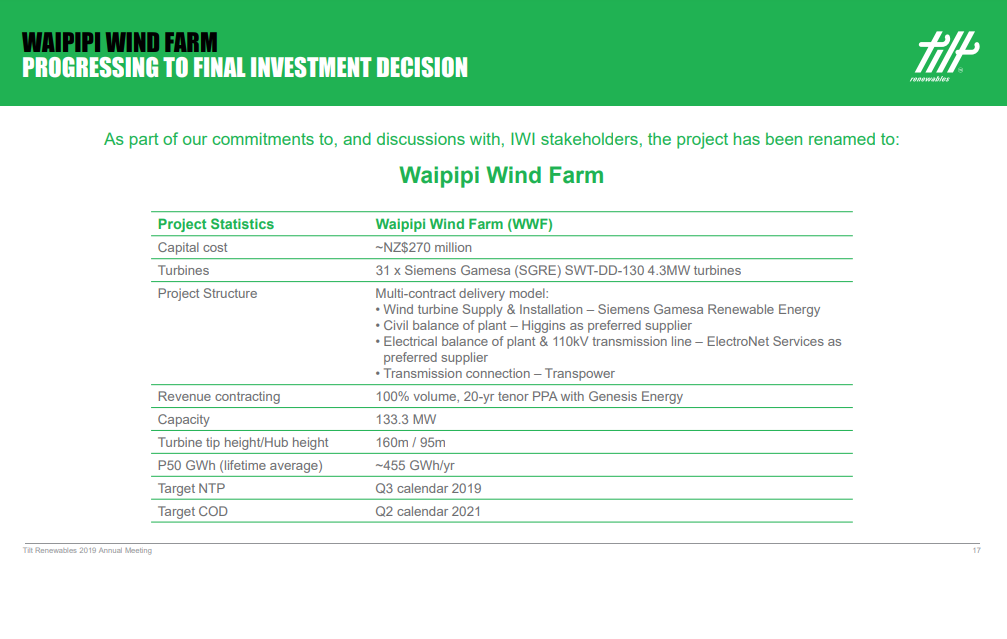 Meanwhile, the cost of the project is NZ$276 million, and the project includes 31 4.3MW Seimens Gamesa turbines with a 130m rotor diameter, which is the largest ever in New Zealand. The average annual capacity of the project is 455Gwh of clean & green electricity.

Besides, the company had signed a 20-year offtake agreement with Genesis Energy Limited (ASX: GNE), who would purchase the energy. The project would be funded via project debt financing, equity generated internally and retained earnings. The company expects the project to progress with financial close during the upcoming month.

Based in New Zealand, Genesis Energy is a diversified energy entity, and it is the countryâs largest energy retailer. Genesis also operates retail brands to sell electricity, reticulated natural gas and LPG. In New Zealand, the company has thermal and renewable energy assets to generate electricity, and a Joint Venture for oil & gas.

Reportedly, the basic EPS for the period was 5.84 cents in FY2019 compared to 1.97 cents in the previous corresponding period. The company was able to offset higher fuel costs through the well-balanced spread of fuel contracts, which underpinned the earnings growth. 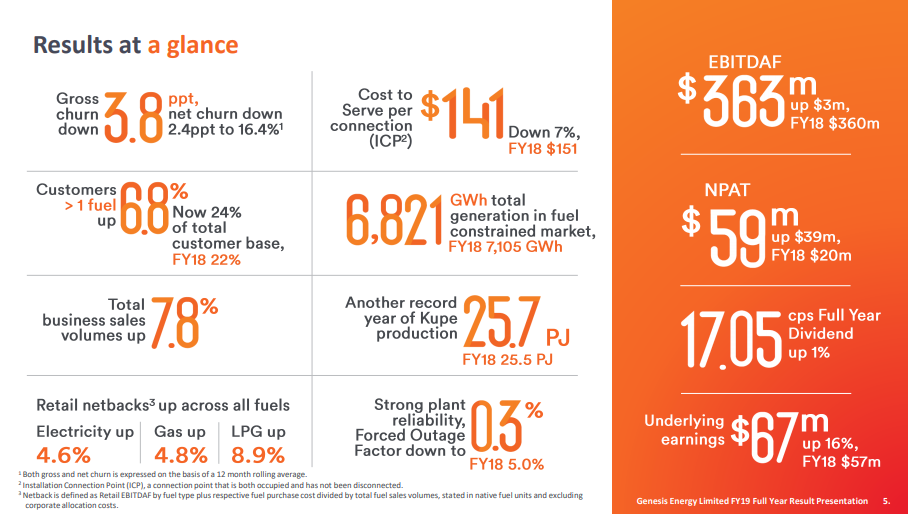 Meanwhile, the company is committed to a renewable energy future, and it had partnered with Tilt Renewables on a new wind farm in South Taranaki, which would be capable of removing 250k tonnes of carbon each year.

Besides, the company is actively exploring new opportunities to play a role in the countryâs low-carbon future. It has focused on retail markets with customer engagement with rewards to loyal customers, and, in May 2019, Genesisâ 150k customers took part in its fifth Power Shout.

As per the release, the company expects to report EBITDA (A-fair value changes and other gains and losses) in the range of $360 million to $380 million, and the capex guidance for the period is $100 million.

Infratil invests in businesses engaged in energy, social infrastructure, and transport. Recently, the company held an Annual Meeting â 2019 on 22 August 2019, and all the resolutions were passed in the meeting.

Reportedly, the company has an option to accept up to $100 million of oversubscription at its own discretion. The offer of debt securities is consistent as the same class of existing debt securities. 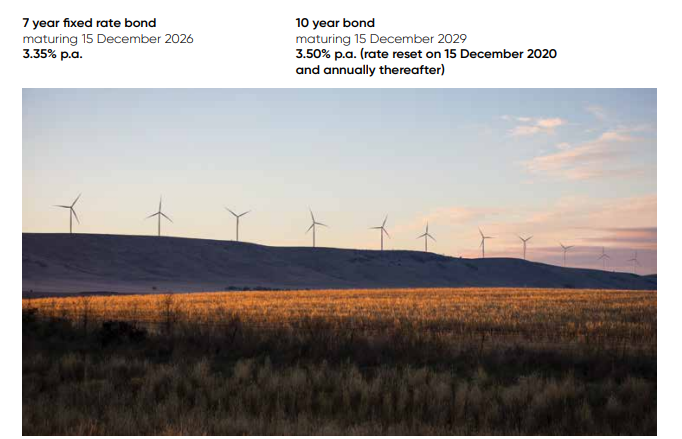 Besides, the offer is available to all investors in New Zealand, which closes on 20 September 2019, and the company has an option to close the offer earlier.

Reportedly, the forward contracted load grew 11% to 32.2TWh compared to 28.9TWh in the previous year end. The company witnessed a decline in C&I load, which was down 8% against the previous year.

Meanwhile, the company recorded an increase in gross margin per MWh compared to the previous year. The gross profit margin was at $5.16/MWh for the period above the full-year outlook provided in August 2018. 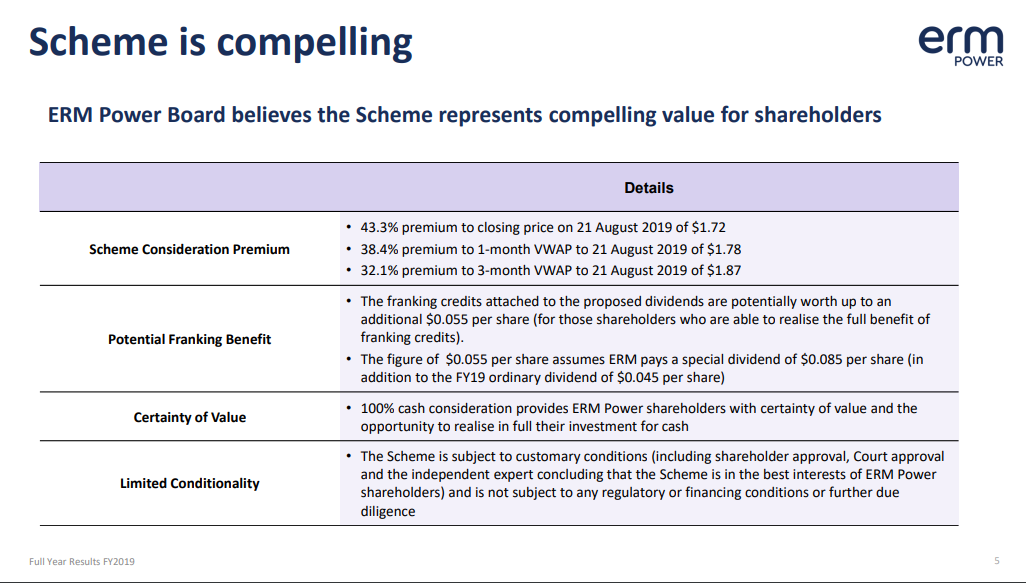 Concurrently with full-year results, the company also broke the news related to the proposed acquisition by Shell Energy Australia Pty Ltd, and it has entered into a scheme implementation deed with Shell Energy. Under the scheme, Shell Energy has proposed to wholly acquire the share capital in ERM Power.

Reportedly, the consideration for the transaction is $2.465 per share, and the Board of the company has proposed shareholders to vote in favour of the scheme in the absence of the superior proposal. Besides, the offer price represents a premium of 38.4% to the one-month VWAP of share price to 21 August 2019.