The energy sector is an amalgamation of gas, coal, petroleum, fuel, nuclear power, and so forth. The sector is engaged in selling and generating energy.

Energy requirement is one of the most pivotal aspects of different industrial sectors around the globe. Given the huge dependence on energy forms and growing awareness regarding increased global carbon emissions, there has been a humungous demand from several countries for renewable and environment friendly energy sources.

The three such renewable energy-related stocks under discussion are as follows:

Genex Power Ltd (ASX: GNX) is a leading player in the renewal energy, that have hydro and solar projects in its portfolio. On June 14th, 2019 the company received the approval of the Generator Performance Standards (GPS) from the Australian Energy Market Operator (AEMO) required for the Kidston Pumped Storage Hydro Project. After getting GPS approval, the company can now operate the project as per the requirements of the National Electricity Market (NEM).

Further, the approval is one of the important milestones needed for the financial closure of the project. This project of 250 MW was anticipated to start the construction work, in the first half of 2019. Moreover, in December 2018 quarter, the company had generated positive cash flows from 50 MW Kidston Solar Project. The company is further expected to generate revenue, in the near term, from the 50 MW Jemalong Solar Project. Meanwhile, GNX stock has given a return of 4% in the last month (as on June 14th, 2019).

Pacific Energy Limited (ASX: PEA), invests and operates in power supply businesses. The companyâs subsidiary, Kalgoorlie Power Systems (âKPSâ) has recently won the contract that was signed with AngloGold Ashanti Australia Limited, to expand by 4MW the existing gas-fired power station at Tropicana gold mine. The current capacity of this power station is 44MW and there is an option to expand further by 2MW apart from 4MW. After the expansion of 6MW, the total capacity of the gas-fueled power station at Tropicana will be 50MW. The company plans to commission 4MW initially by December 2019 and the further expansion of 2MW will be at the option of AngloGold.

This contract is valid till 2028 and can be extended further for another 5 years. PEA will bring in line the new power generation capacity of 17 MW by the end of this calendar year. This is through the recent winning of the contract of additional expansion of the capacity by 2MW, the expansion of 6MW for St Barbara Ltd and the commissioning of new 5MW Juardi power station, planned to be undertaken soon. KPS and the Companyâs Contract Power subsidiary are both in talks with several potential customers to secure the contracts for further expansion of the capacities. Therefore, PEA plans to commission 11MW in or by July 2019. 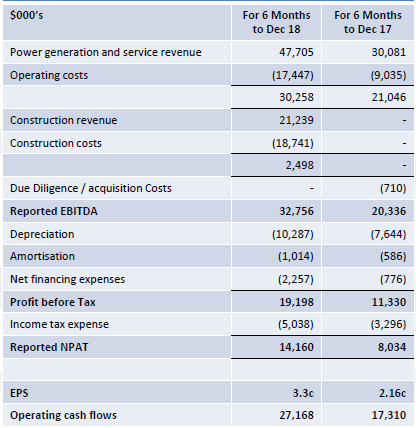 Tilt Renewables Limited (ASX: TLT) is into the generation and operation of electricity from renewable sources in New Zealand and Australia. TLT has recently, notified about its intention to comply with the NZX Listing Rules, that was dated 1 January 2019 from 1 July 2019.

On the other hand, the company recently declared that it had decided not to pay a final dividend for the FY 2019 ended 31 March 2019. The decision of payment of dividend depended on the shareholderâs anticipation for short term returns and the capital requirements of the business in the future.

Also, the company had recently funded A$560m for the 336MW Dundonnell Wind Farm project. This was through the mix of debt of A$300m and equity of A$260m, which the company had secured from its shareholders through the rights issue from February to March 2019. Moreover, TLT in May had signed an off?take agreement with Genesis Energy Limited for securing 100% of the output from the Waverley Wind Farm Project of 133MW. The company projects that that the projectâs final investment decision and financial closure will be attained in the second half of 2019. As a result, the company requires funds for funding the equity needs of these projects. Therefore, as mentioned above, there will be no dividend declared in 2019.

At the end of 31 March 2019, the companyâs total cash position stood at $95M. Along with this, the company had financial assets (investments) of about $225M from the equity raise proceeds of Dundonnell that the company had kept aside for future capital expenditure. The company expects that Dundonnell will remain under construction till March 2020. Additionally, Genesis and TLT had finalized electricity offtake agreement meant for 20-years. This agreement is anticipated, that it will provide the foundation required for the construction of the Waverley Wind Farm Project. Waverley Wind Farm Project is a project of approximately 130MW, located in South Taranaki. The company had formed the strategic offtake relationship with Genesis Energy in order to help the generation portfolio decarbonisation in New Zealand.

The Waverley Wind Farm marks the first project that is under their strategic partnership. The finalization of offtake agreement between them will enable TLT to complete the remaining development activities of the project. The company will now be able to take the final investment decision and can start the wind farmâs construction in the next 6-9 months. In addition, for FY2020, the company expects EBITDAF to be in the range of A$122 to A$129 million. The company has fully contracted for its operations and maintenance in FY 2020. For FY 19 period, the company had reported a 22% rise in revenue, a 30% increase in EBITDAF but 28% fall in the net profit after tax. However, during FY 19, underlying earnings after tax rose at 253% to A$14.2 million. 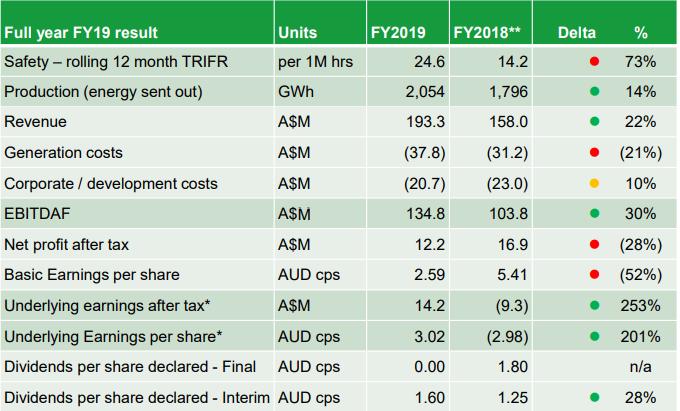