The Nickel Gameplay: WSA and IGO

Nickel prices have moved up due to the rise in demand from alloy-makers at spot market. There has been a rise in the delivery of February & March contracts. However, the nickel prices declined almost 8% as there was pressure on metals on the back of weak US dollar and the Wuhan epidemic, which led to travel restriction and standstill of industrial and retail procurement.

China, which is the largest consumer of base metal has made the decision to extend the Lunar New Year break to February 2 from January 30 in order to prevent the travelers to become the vehicle in spreading the coronavirus. As a result, there has been a fall in the demand of industrial commodities. But it is anticipated that the prices of the metals will rebound in the medium term as the government of China is taking all necessary steps to control further spread of coronavirus. This is also on back of anticipation of resuming of trading activities by the Chinese traders after the New Year holiday.

Moreover, the long-term prospects of nickel price will remain highly volatile. The analysts are bullish for the prices in the first half of the calendar year 2020, but they are bearish for the second half of 2020 on the back of US presidential election. Additionally, the market is expecting one or two rate cuts possibility in 2020 that may be done to support the US economy, which means further weakening of dollar that will support nickel prices in the long run.

Western Areas Ltd (ASX: WSA) is an Australian company that produces & develops highest grade nickel and its production is at low unit cash cost. The company has in its portfolio 100% owned Forrestania project with two nickel mines, Flying Fox and Spotted Quoll. The company mines second largest independent sulphide nickel and produces in the range of about 21,000 to 22,000 nickel tonnes in concentrate per annum. The company’s key growth project is the Odysseus mine which has a long, ten-year mine life and produces nickel at low operating cost. This is projected to help the Company’s nickel production in the future. WSA also has exploration interests in Grid Metals Corp, Canada.

On 28 January 2020, WSA released the December activity report for the period ended 31 December 2019, wherein it mentioned that it had produced nickel of 5,849 tonnes and produced 11,654 tonnes of nickel for the half- year period. The company has produced 5,399tn of nickel in concentrate from the Forrestania operation for the quarter and produced 10,658 tonnes of nickel for half-year, while as per the company’s FY20 guidance range the WSA had projected mill production to be in the range of 21,000 to 22,000 tonnes for full year.

The company had incurred the unit cash cost of nickel in concentrate of $3.10/lb for the second quarter and $3.07 during the half- year period, whereas the company’s FY20 guidance for it was in the range of $2.90/lb to $3.30/lb. During the quarter, the company had sold nickel of 3,991 tonnes and had posted the sales of 9,042 nickel tonnes for half year, which was affected due to the timing of export shipment after quarter end on 1 January 2020. Further, during the second quarter, the company had generated the operating cashflow of $56.7m, net free cashflow of $19m and at the end of the period, the company’s cash stood at $184.9m versus $165.9m at the end of September quarter. 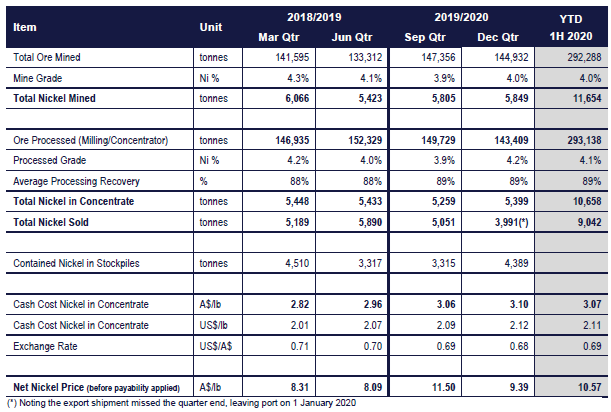 As mentioned in its quarterly activities report, declared on 30 January 2020 for the December quarter result for the period closed 31 December last year, the company for the second quarter of 2020 compared to previous quarter has reported 20% fall in the revenue and other income to $211.6M & 48% fall in the Profit after tax to $34.1M, driven by lower nickel prices.