Previously, the Callion Main Lode has been the focus of underground mining, with access initially by way of shafts, followed by decline development in the late 1980s. Moreover, there are pieces of evidence of ore development and production stopping over six levels and stretch to a maximum vertical depth of 250 metres beyond the surface. In addition to this, gold mineralisation at Callion has been defined by drilling to depths of approximately 450 metres beneath the surface and dives moderately to the south.

Related: Tracing the Progress of Ora Banda at Waihi Project in 2020

Ora Banda’s recent drilling has focused on defining additional underground resources proximal to and above the base of existing workings. Moreover, a considerable amount of potential remains to expand the solid results from deeper drilling indicating the resource below the existing mine workings.

A Look at the Callion Deposit 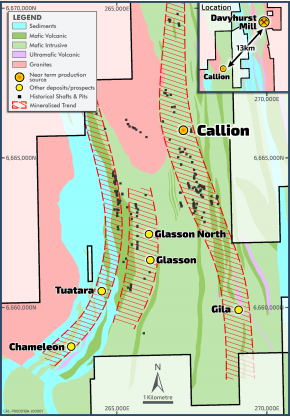 Callion Deposit, being one of the five priority mining targets identified by Ora Banda is a key part of the Company’s plans to underpin the viable restart of production operations at its Davyhurst Gold Project. . Moreover, the current Callion open pit is approximately 650m long and 40m deep, with underground workings extending off the southern end of the pit to a vertical depth of 250 m.

The new underground Resource at Callion incorporates all recent resource definition drilling, both extensional and infill, by Ora Banda. The drilling undertaken has significantly increased the geological understanding of the area and provided additional drill support for a robust model.

Moreover, with a major shear plane evident through the central section of the existing Callion pit leading to a broad zone of structural disruption, the dominant structural trend at Callion is oriented NW(Northwest)-SE(Southeast). Mapping of additional small NW-trending cross faults has been done in the southern section of the pit with minor metre-scale sinistral movement.

In addition to this, Callion’s mineralisation is characterised by a series of steep east-dipping to sub-vertical stacked quartz lodes, striking approximately 3500 over a strike length of about 1200 metre.