What is the meaning of Blue-Chip Stocks?

Blue-chip stocks are generally held at a highest value. When it comes to a companyâs perspective, the blue-chip companies have excellent reputation in the industry. These types of companies have their market capitalisation in the billions, are large sized, as well as financially sound.

Advantages of Investing in Blue-Chip companies:

Ceasing to be a Substantial Holder

The bank recently published a series of announcement, wherein it has ceased to become a substantial holder:

A look at the Third Quarter of Financial year 2019

The company recently updated the market with the operational and financial performance for the third quarter of financial year 2019: 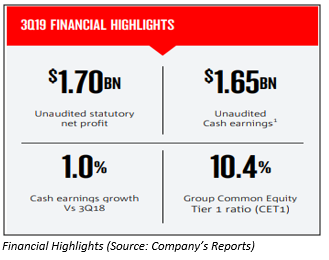 It offers banking and finance related products and services to business and individuals both. The market capitalisation of the company stood at $80.5 billion as on 27th September 2019.

When it comes to the performance of the stock, Australia And New Zealand Banking Group Limited last traded at a price of $28.68 per share with a rise of 0.986% on 27th September 2019. It witnessed a rise of 9.91% in the time frame of six months. On Year to date basis, the stock produced a return of 19.03%.

Commonwealth Bank of Australia (ASX: CBA) provides banking and finance related services. The market capitalisation of the bank stood at $143.71billion as on 27th September 2019.

As per the release dated 25th September 2019, the bank provided an update to the market regarding its instalments, wherein the following key points were mentioned:

Ceasing to Be a Substantial Holder

The following picture provides an idea of net interest margin: 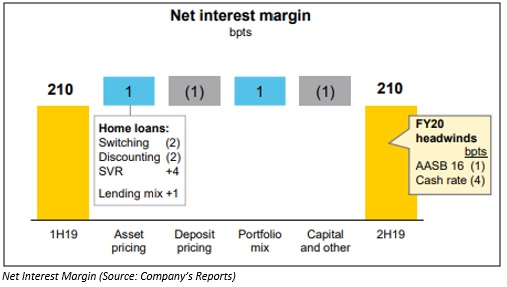 It is a well-known hospital group, which generally owns and runs numerous healthcare facilities.

A brief on Substantial Holdings

Recently, the company has released a series of announcements, wherein it communicated about the change in the substantial holdings:

Reduction in Holdings by Paul Ramsay