Resource Sector Continues To be the Strongest Pillar of GDP in 2020-21?

The mining sector accounted for about 35 per cent of the total GDP growth in 2018-19 and reflected 8.5 per cent in the total GDP for the same period. Australia exports rose above the first quartile of $1 trillion to carve a record high of $279 billion in 2018-19, and further expected by the Department of Industry, Innovation and Science (or DIIS) to touch a new record high of $280 billion in 2019-20.

The resource sector (mining) is a large contributor towards this revenue along with the depreciating domestic currency. In the status quo, the DIIS forecasts that the export earnings would take a hit of 9 per cent in 2020-21 to stand at $256 billion, which is yet above the first quartile of $1 trillion, amid weak projected commodity prices ahead and appreciating dollar.

However, there are industry doubts and variance, which need to be thoroughly considered post reaching any conclusion, and the mining sector has a reputation to preserve, which means, the sector must generate enough volume to overcome the fall in value, which post considering the array of significant projects, looks likely.

Australia which is already sitting among the top LNG supplier is further looking to expand the export capacity, and the upcoming projects comprise 47 per cent of LNG/Gas/Oil projects.

To Know More, About the LNG Expansion, Do Read: LNG-Hero or Hubris for ASX Energy Stocks?

While the prices of iron ore have cooled down recently, expansion is on its way in Australia with 25 per cent of committed projects being related to iron ore.

The value of committed projects stood at $30 billion in October 2019, which remained unchanged against the previous corresponding period (or pcp), and a number of major resources and energy projects were completed during the twelve months to October 2019.

There has been an increase in both the number of new projects and expansion projects; however, there is a larger distribution of projects ranked as unlikely or possible, which might reflect the plunge in few commodities or uncertainty around the global market.

The investing community remains to support expansion or new projects of coal with low commitment towards coal greenfields project, and many investing institutions have clearly mentioned that they would not finance thermal coal projects.

Related Read: Coal Down 37% From Peak Thanks to Falling Renewable Cost and Natural Gas Prices 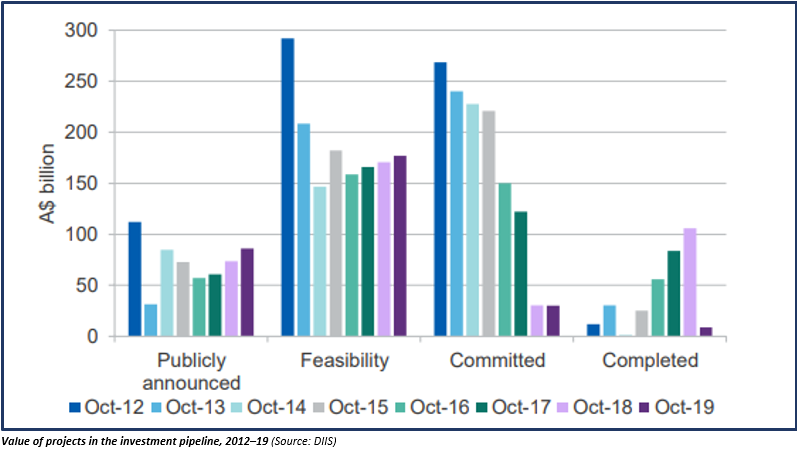 The anticipated increase in commodity prices over the improved demand from emerging Asia has supported an increase in exploration expenditure, particularly around the base metals and gold.

Gold is currently witnessing a high expenditure, especially in the Western region, which is now being called as the golden hub of Australia. Gold now accounts ~25 per cent of all exploration expenditure, is further fanning the proponents to tackle more difficult deposits across a range of mineral commodities.

The iron ore projects are currently gaining impetus from the high demand anticipation from China, and currently accounts for over $40 billion of the investment expenditure; however, the majority of projects in the pipeline are challenging in terms of extraction.

Number of projects at the publicly announced stage (Source: DIIS)

Other projects including gold, base metals and other commodities account for $28 billion investment expenditure and are currently either publicly announced or are in feasibility with a rating of likely and possible to receive a final investment decision.

Likewise, base metals exploration expenditure soared by 25 per cent against pcp in 2018-19 to stand at $621 million.

Nickel and cobalt expenditure remained relatively muted as compared to other commodities in 2018-19.

Australia is witnessing a surge in exploration expenditure and in the number of projects in the pipeline, which could further help the resource sector to maintain its charm in Australia and stand stall against the short-term price headwinds ahead.

However, the “unlikely” rating of a large number of projects could lay challenges ahead, and it would be worth noticing if the resource sector could take advantage of producing right commodity at the right time to stand tall against all the possible challenges which lie ahead of them. 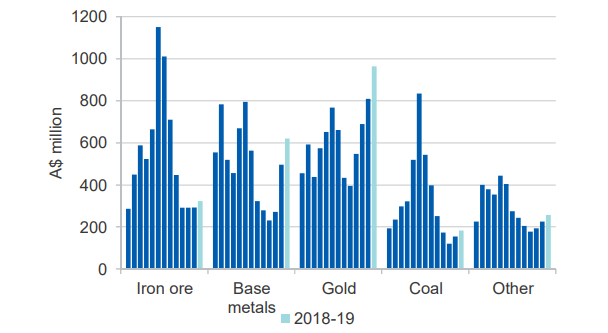