The new gas boom across the global market is unfolding, thanks to higher LNG production from Qatar, Australia and the United States. Australia came into the limelight in recent past after surpassing Qatar over LNG exports, that supported the ASX listed energy stocks.

To Know More, Do Read: Australia To Jostle Qatar For The LNG Crown; How Long Would The Reign Last?

Many ASX listed energy stocks such as Woodside Petroleum Limited (ASX: WPL), Origin Energy Limited (ASX:ORG) are gaining momentum since September 2019 quarter to now over the higher LNG consumption in China and Japan.

However, tables could now turn for the LNG industry as the energy generation trend and LNG infrastructure shifts across the globe.

The renewable energy generation, which remained a cost-centric project on a global scale, gained a swift momentum post the signing of Accord de Paris, where international dignitaries reached the landmark decision to slash the carbon footprints over the years ahead to make earth carbon neutral with a net emission equals to zero.

The committed focus on the renewables aided by elevated R&D is finally positively impacting the expenses of households, office, and businesses, by making renewable energy affordable, and we have witnessed the increasing number of solar rooftop panels throughout the continent.

The energy market operator (or AEMO) also projects that solar would increase threefold in the near future.

While affordable renewable energy is getting ready to capture a large tranche of the global energy generation portfolio, the second-largest LNG consumer- Japan is fundamentally shifting towards nuclear energy generation over improved security and operational measures across nuclear power plants.

The potential headwinds for LNG industry across the globe do not end here, the IMO MARPOL convention is also near, which would drag down the prices of high-sulphur content oil, against which most of the LNG exporters decide the selling price.

Apart from that, the development of gas infrastructure for transferring natural gas, which initially supported the transportation of LNG fleets across the globe, is now facing a risk of being stranded assets over a fundamental shift, and due to IMO 2020 in terms of soared transportation cost.

To Know More, Do Read: IMO MARPOL Convention To be Implemented Soon; Impact on Stakeholders and LNG Industry

The gas pre-construction projects across the globe are expected by the industry experts to more than triple the global LNG export capacity over the coming years. Currently, the LNG export capacity is under development across 20 counties with many projects concentration in Northern America.

The LNG import terminals have clearly witnessed higher development as compared to the export terminal, mainly because of two main reasons;

For the above-mentioned reasons, the export projects have relatively seen slower growth as compared to the import projects, and demand further investments, which could face resistance due to falling renewable energy cost across the globe.

On the other hand, the falling oil-linked LNG contracts could also cage the much-needed cash for the export projects along with the worry of high methane emission, which is a direct threat on the objective of Accord de Paris.

Methane is a major component in natural gas and is currently responsible for 25 per cent of global warming (till April 2019), and as measured by global warming impacts, the developing LNG projects on a large scale pose a direct challenge to Paris climate goals.

The Risk of Being Stranded Assets

Lazard Bank, in its 12th annual levelized cost of energy report, suggested that the cost of unsubsidized solar PV is now as comparable to the cost of natural gas peaking power across various economies such as the U.S., Australia, India, and likewise, the wind power is now comparable in cost to combined cycle gas turbines.

The competitive renewables are now changing the power industry, which could be inferred from the dramatic fall in the demand from the gas turbine industry. 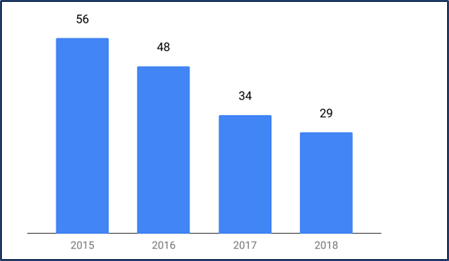 The above-mentioned factors have consistently exerted pressure on LNG prices in the global market, and the Department of Industry, Innovation and Science anticipates the LNG export revenue to tumble over the decline in LNG prices and appreciating AUD.

However, the fall in the LNG spot along with a large fall in oil-linked contract prices could boost the ASX energy stocks, but that also hold significant risks over variable factors such as penetration of renewable energy in the domestic market and interlinking of grid systems ahead.

To Know More, Do Read: LNG Price Fall- A Much Needed Strategic Decline For Long-Term Impetus?