Copper prices are gaining momentum in the market over the supply shortage seeded by a strike at the BHP Group Limited (ASX: BHP)-operated Escondida Copper Mine in Chile along with an export ban from Indonesia. The ASX-listed copper stocks such as Independence Group NL (ASX: IGO), Castello Copper Limited (ASX: CCZ) and many others are now under the radar of commodity-linked equity investors over the industry anticipated rise in copper prices.

Copper futures on COMEX (CME) soared from USD 2.494 per pound (low in September 2019) to USD 2.857 (high in December 2019) per pound, which underpinned a price appreciation of over 14.50 per cent. Apart from copper, gold witnessed a strong rally as well, which eventually elevated the copper exploration during the last quarter of 2019 amid co-existing gold and copper deposits.

The co-existing gold and copper deposits in Australia provided much grin to the miners, and while the gold prices are surging, the ASX copper miners rooted themselves strong to take advantage of the projected prices.

Australia holds the number two spot when it comes to the export of copper ores and concentrates and the seventh-largest producer of copper across the globe, supported by its high expenditure in the copper exploration activities. 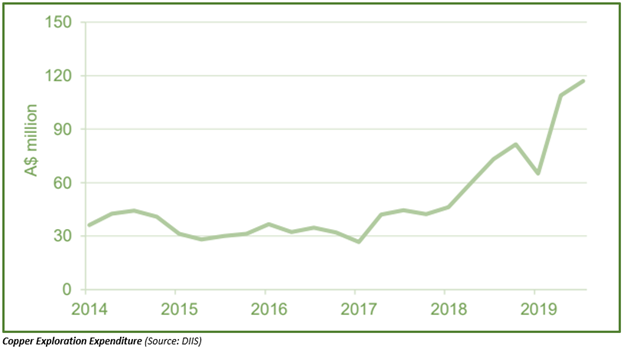 However, despite such high exploration, copper production is anticipated to slightly decline to 922,000 tonnes in 2019-20 over few suspended operations. 2020-21 is expected to witness higher production as few new projects come online to reach 978,000 tonnes.

The OZ Mineral’s (ASX: OZL) operated Carrapateena mine with an annual capacity of 65,000 tonnes in South Australia would contribute to the growth. In the recent events, the bilateral trade dispute between the United States and China had exerted tremendous pressure on copper prices, which further fuelled the closure of some copper projects such as of Metals X’s (ASX: MLX) operated Nifty Copper Mine in Western Australia.

The industry-projected surge in copper prices ahead could prompt the miners to revive the copper-operations again, which is further anticipated by the Department of Industry, Innovation and Science (or DIIS) to support the copper exports ahead.

DIIS forecasts the consumption to grow at an annual average rate of 3.6 per cent to stand over 25 million tonnes in 2021, depending upon the level of industrial activity in China. China’s copper consumption growth is expected by industry experts over the government’s stimulus to promote economic growth, which could further propel the copper consumption amid its high utilisation in infrastructure. 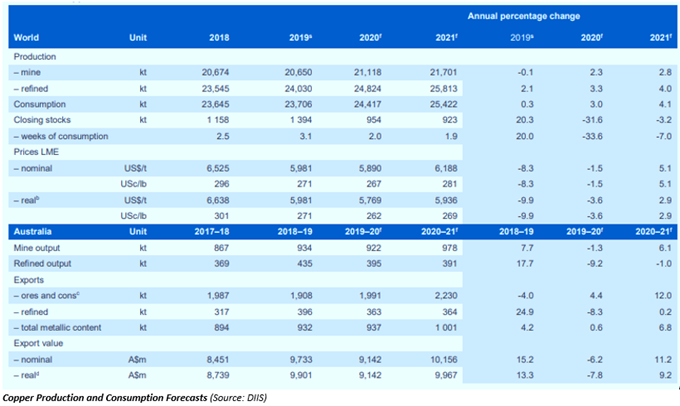 What Are Market Actions Suggesting? 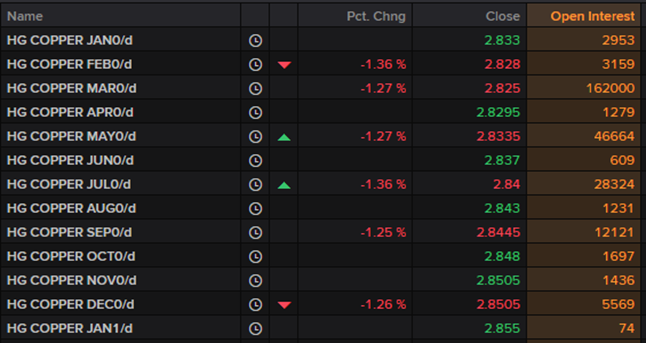 On following the futures contract price actions, it could be witnessed that copper prices are currently moving in contango post the October expiry, which further suggests that at present the storage cost for copper is higher than its convenience yield. However, overall the medium-term the market anticipates the convenience yields to be larger than the storage cost.

To Get Familiar With The Technical Terms Associated With Commodity Futures, Do Read: An Investors’ Guide For Commodity Valuation And Mining Stocks

The market expectations could be further confirmed by the future curve for COMEX copper, which is sharply turning up over the long-term, which suggests a lustrous outlook for copper ahead. 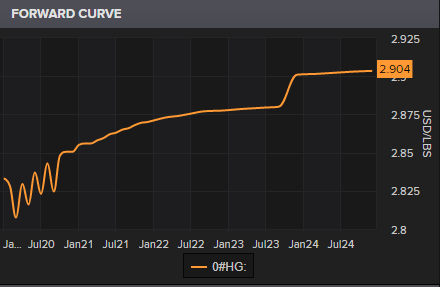 It could be inferred from the above chart, that the near-term 3 months expiry is presently trading below the current Jan 2020 expiry, which suggests that copper prices could face short-term headwinds and market is factoring in the recent slowdown in the Caixin Manufacturing Index (China).

While the current near-term 3-month expiry is showing a positive value, the latter expires are showing a negative value, which suggests that the longer-dated contracts are trading at higher prices, with decent open interest, which could be an indication that buyers are securing delivery at current rate over the anticipation of higher prices in the future ahead.