The world is getting attracted towards state of the economy in Australia. In the past two months, the Reserve Bank of Australia had slashed the rate, consecutively. On 2 July 2019, a statement by Mr Philip Lowe, Governor also enlisted the escalated investments in infrastructure which supported the declines in other areas such as consumption growth, low-income growth and declining housing prices.

According to the Department of Foreign Affairs & Trade (DPAT), the economy witnessed a 13.2% jump in Foreign Direct Investment (FDI) to Australia industries. Notably, real estate activities accounted for 10.6% of A$967.5 billion â the total FDI attracted by the country in 2018. In addition to this, Mining & quarrying represented a total of 37.8% of the total FDI into Australia industries. 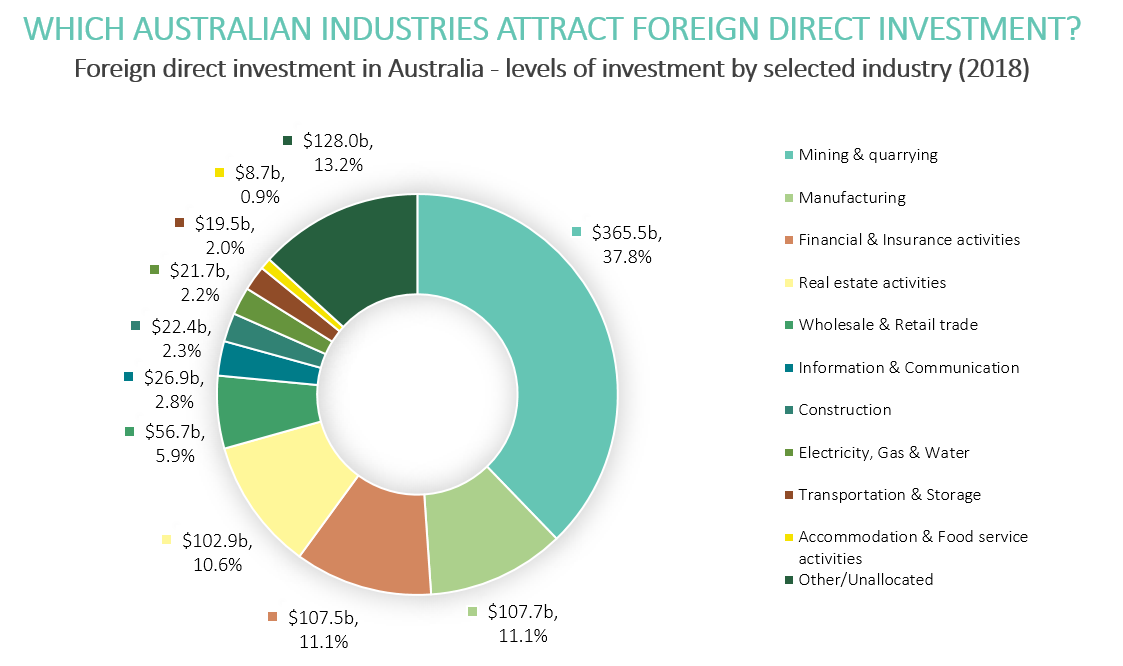 Why is Real Estate attractive?

Prices: The Australian Housing sector has been witnessing a consistent decline in the price, which makes the investment cheaper. In April, as per CoreLogic Inc. data, the nationâs two biggest housing markets saw a decline of 0.7 per cent and 0.6 per cent in Sydney and Melbourne. Since witnessing a peak in 2017, prices in both cities have plunged down. Home prices had slipped by 7.3 percent during the last one year in average weighted terms. Further, home prices slid by 0.4 per cent in May 2019 against April 2019.

Monetary Stimulus: The two consecutive rate cuts from the apex bank in Australia also depicts the need for the intervention to revive the economy. Therefore, these two rate cuts would be beneficial for the economy; it would provide support to businesses for acquiring capital at a lower rate along with the contracted interest payments by the household of the economy.

Fiscal Support: In this regard, there have been numerous interventions by the Federal Government. Some of the development in this includes the recent A$158 billion dollar income tax package; state governments have committed heavily to invest in the infrastructure â an economic driver. In addition to these, the newly elected Federal Government had mentioned in the agenda to introduce First Home Loan Deposit Scheme without a 20 per cent deposit. Nevertheless, the WA government has a similar scheme.

Considering these factors, it appears the upcoming months in the Australian economy could be of heightened market sentiments driving valuations on the back of strong macro fundamentals.

In this article, we would discuss a stock reputed to be acquired by the Global Property Major - Brookfield Property Partners LP (NASDAQ: BPY). So, it can be said that the real estate markets are attractive in Australia. 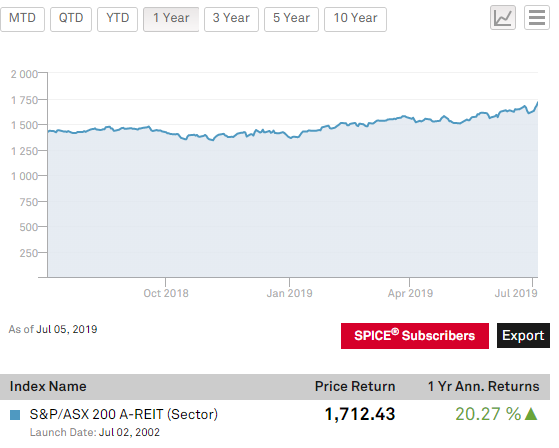 Furthermore, State Streetâs SPDR S&P/ASX 200 Listed Property Fund (ASX: SLF) is a fund that tracks S&P/ASX 200 A-REIT (Sector). Over the past one year, the price of the ETF witnessed an increase of 17.82%.

Let us now look at the recent update on Aveo Group:

Aveo Group (ASX: AOG) offers retirement living and care to the elderly people in Australia. The company has been in business for more than twenty-five years now. It provides flexible care options, vibrant communities, along with escalated food standards.

On 04 July 2019, Aveo Group confirmed the preferred party in its widely popular strategic review- Brookfield Property Group, collectively with its group and managed funds. Accordingly, the company is conducting discussions with Brookfield regarding the Indicative Proposal, so that AOG can take a step towards definitive agreements. Also, entering into the definitive agreement would pave the way for Scheme of Arrangement to provide result to the Indicative Proposal.

Meanwhile, the company asserted that the outcome is still uncertain, whether it would result in an acceptable offer for shareholders of Aveo or the completion of the transaction. Furthermore, Aveo would provide additional information in this regard on 22 July 2019 or after.

Background: On 15 August 2018, the Board of Directors (Board) of Aveo Group reported on undertaking a strategic review, intended to emphasise on closing the value gap between the retirement properties and the companyâs listed securities. It appears that the company has been under the impression that the value of assets held by the company do not complement the market price of the Aveoâs securities.

Subsequently, in November 2018, Board notified that an Independent Board Committee (IBC) had been established to consider & respond to the parties interested in strategic review. In addition to this, IBC gave green signal to initiate the first phase of the process.

In February 2019, Aveo treated the market with other updates, which confirmed that numerous indicative non-binding bids were received during January this year from the parties interested in a whole company transaction. During latter part of the month, the second stage of the process commenced with preferred parties, which were shortlisted collectively by Aveo and its advisors.

Reportedly, the third stage of the transaction was commenced with two parties in April 2019. Also, Aveo had been engaged with a preferred party during May and June 2019, and a confidential non-binding and conditional indicative proposal was presented to the company by a preferred party. Furthermore, the company has been negotiating the Indicative Proposal with the preferred party.

Importantly, the IBC asserted that if the agreement consequential to Scheme of Arrangement cannot be agreed by 22 July 2019, Aveo would discontinue the whole-of-company sale process. Merrill Lynch Markets (Australia) Pty Limited has been appointed to lead the transaction from Aveoâs as the financial advisor along with Herbert Smith Freehills as legal advisor.