The Reserve Bank of Australia has lowered its interest rate by 0.25 percentage points to an historic low of 1 per cent on 2 July 2019, aimed at supporting the economy and lowering unemployment rate in the country.

This is also the first consecutive rate cut introduced by the bank since 2012. The first cut announced in June was widely accepted by the market. Several market experts are predicting another interest cut before the end of the year, if the freshly announced cut fails to deliver the expected results.

As per RBAâs official statement, âThe Board will continue to monitor developments in the labour market closely and adjust monetary policy if needed to support sustainable growth in the economy and the achievement of the inflation target over time.â

This could be another good news for property market in the country, as recently in the month of June, property prices in Sydney and Melbourne, the two biggest cities in Australia, reported a modest increase, representing the first monthly rise in almost two years. In May, housing prices dropped 0.4 per cent and 0.6 per cent in Sydney and Melbourne, respectively, according to data released by the Australian Bureau of Statistics (ABS).

The signs of stabilisation in the home prices in June can be attributed to lower mortgage rate cuts, improved consumer sentiments after the results of the federal election in May and loosening lending restrictions by the banking regulator Australian Prudential Regulation Authority (APRA).

The fresh rate cut and slight recovery in property prices in Sydney and Melbourne add to the signs that the housing market slump in Australia could be slowing and leading the recovery trend.

According to data from Hedonic Home Value Index for the month of June, released by property consultant CoreLogic on 1 July 2019, housing prices grew 0.1 per cent in Sydney and edged up 0.2 per cent in Melbourne in June.

Housing prices in the two cities, Sydney and Melbourne, which are also the largest residential markets in the country, had witnessed a market peak of 14.9 per cent in July 2017 and 10.9 per cent in November 2017, respectively. The interest rate cuts announced by the Reserve Bank of Australia in June and re-election of the coalition government have seemed to encourage buyers and gave confidence to investors, resulting in the slight boost in Sydney and Melbourne housing prices.

Moreover, preliminary auction clearance rates (during the week ended 29 June 2019) has been recorded as 67.1% per cent in Sydney and 69.7% per cent in Melbourne.

Preliminary auction clearance rates, which represent the percentage of property that is sold at an auction every weekend, are generally the early indicator of rise in the prices of housing units.

A rapid recovery shouldnât be expected, as falls are continuing elsewhere, with national property prices reporting a 0.2 per cent fall. Although, it should be noted that the decline in property prices, nationally, was also the smallest monthly price drop since March 2018.

In the sixth month of 2019, combined regional property markets witnessed a decline of 0.4 per cent over the month in Australia.

In terms of rental yield, Darwin reported the highest increase of 6 per cent, while Sydney recorded the lowest (3.5 per cent) for the quarter ended June 2019. 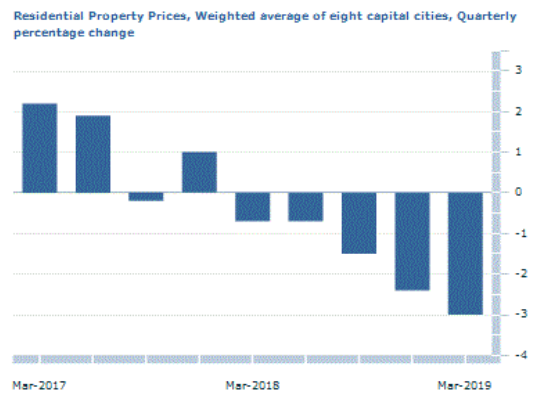 Considering this, the Reserve Bank of Australia (RBA) revised the cash rate from 1.5 per cent to 1.25 per cent in early June 2019. The 0.25 per cent cut announced by the central bank was the first cut in the benchmark rate since August 2016 or in 34 months in the country.

The major goal of this interest rate cut was to help reduce unemployment and boost inflation in Australia back towards its target range of 2-3 per cent.

Rate cuts are unlikely to stop here, as the central bank is seeking to get the inflation target on track.

Various factors such as the performance of the Australian dollar, gross domestic product (GDP), consumer confidence, inflation and housing market scenario influence the bankâs decision, which is aimed at achieving three key objectives set out in the Reserve Bank Act 1959.

These key objectives are the stability of the Australian currency, the maintenance of full employment in the country, and the economic prosperity and welfare of the Australians. The central bank sets a 2-3 per cent inflation target over the medium term in order to achieve these objectives.

To control inflation, the Reserve Bank of Australia adjusts the official cash rate. Considering the slowing economy of the country, several market experts are anticipating a further cut in the benchmark rate.

Any further cut in interest rate would have a positive effect on housing demand across the country, with lower mortgage rates expected to result in a similar trend in housing prices in smaller capital cities as shown by Sydney and Melbourne in the month of June.

What to expect from lower interest rates?

When the interest rate is cut, several banks and other lenders pass on the cut to their clients in the form of a lower interest rate as they use the official cash rate as their rate benchmark for financial products including home loans offered with variable rates. Though this isnât compulsory for these lenders, they do it due to the competitive state of the mortgage market. Thus, a low mortgage interest rate result in a potential rise in housing prices, which means that the borrower would need to make a lesser repayment.

Lower interest rate on home loans attract first time home buyers as well, as it becomes a little easier get a mortgage. Moreover, repayments are also low. When interest rates are low, more people consider purchasing a property. Thus, any further cut by RBA might drive property prices up in the near future.

The graph given below depicts the movement in the official cash rate target of the Reserve Bank of Australia over the past few years.

Current signs are showing that the property cycle in Australia is at an interesting stage and is expected to be nearing the recovery. Buyers get attracted to areas where employment, population and infrastructure is growing. Sydney and Melbourne are the two biggest residential markets in Australia. Property in these two cities would remain a great asset for wealth creation in the long run for investors. The recent figures related to housing prices and expected RBA interest rate cuts are hinting towards a positive impact in other Australian regions in the near future. The downturn may be at its end.