What Made This Retirement Care Provider Trade Lower?

A real estate sector company, Aveo Group (ASX: AOG) is an Australia registered company, which is a manager, owner and operator of retirement communities throughout Australia. It was officially listed on ASX in 1993. Today, on 24th June 2019, the company provided an update on FY19 trading, strategic review and annual distribution.

The conditions of the residential market throughout Australia have continued to affect the timeframe for settlements. In addition, the Australian market has remained subdued despite some improvement witnessed since mid-May. The timing of prospective residents who are looking to settle on their existing properties and move into seniors living accommodation was also adversely impacted.

When it comes to the number game, the resident interest has remained strong with 1,111 total written sales to the end of 51st week in the companyâs retirement product, which translated into weekly net sales rate increase of 20% on the same period last year. This not only ends here; the companyâs positive momentum continued to build in Q4 FY19, with an average of 23 net sales written per week, a growth from 19 in Q1 and Q2 and 20 in Q3. The number of deposits on hand amounted to 297 at 21st June 2019 from 212 at 31st December 2018.

The company also announced an estimated annual distribution of 4.5 cents per stapled security for the year ended 30th June 2019. In addition, the distribution plan is in line with the provided guidance of 40% to 60% of the underlying profit after tax. The record date for determining entitlement to the distribution is 28th June 2019 and it is expected that the company will settle payments for distribution by 30th September 2019.

The company has prescribed a change in the timing of revenue recognition in underlying profit for major development units to a settlement basis from a delivery, which will result in revenue and profit on major developments being recognised on a cash basis in the Underlying Profit effective from 1st July 2019.

The company further added that there will be no change on statutory reporting as the Retirement Communities will continue to be treated as the investment property. The major development units are being included in the assessment of fair value. As a result, there is no change to the accounting treatment and the presentation of the consolidated income statements in the half yearly and annual financial reports.

The reporting of revenue in Underlying Profit will now be recognised on major development new units at settlement for the financial year 2020, irrespective of whether the new units were delivered pre or post 1st July 2019.

The company has established an Independent Board Committee in order to consider and respond to interested parties as part of a strategic review in accordance with its previous announcement dated 30th November 2019. In the month of May and June 2019, the company has been actively involved with a preferred party and received a confidential non-binding and conditional indicative from the preferred party after extensive due diligence.

The Independent Board Committee has indicated that the whole-of-company sale transaction process will be discontinued if the agreement leading to a Scheme of Arrangement cannot be agreed by 22nd July 2019.

The company reported its 1H FY19 results presentation, wherein it has highlighted that the interest in its retirement product has remained very strong. The residential property market has continued to soften for the past seven quarters and over that period, the companyâs average weighted auction clearance rate witnessed a decline from 72% to 42% as at 32nd Week. In the third quarter, for the first six weeks, the leads are at record highs and bookings have remained relatively strong.

The underlying profit after tax for the period amounted to $12.0 million driven by a number of unit settlements. The written sales continued to be steady, notwithstanding the softening in the residential property market. The new unit deliveries stood at 80, which have exceeded the previous expectation of 64 in FY19. The underlying results were impacted by weighting to the second half for the delivery profile of retirement development and non-retirement asset settlements.

The net tangible assets per security declined from $3.92 to $3.83 as at FY18, primarily due to the adoption of more conservative DMF valuation property price growth assumptions. 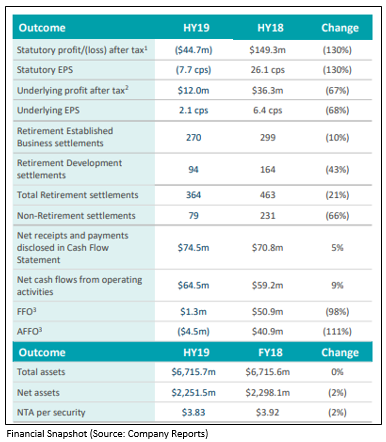 The company anticipates the final settlement to be in the order of 900. In addition, the statutory profit will be subject to the review of asset values for impairments in line with the standard financial audit procedures. AOG is focused on furthering its position as a leader in the retirement living market via innovation in the provision of accommodation and integration of care that residents are seeking and is committed to current initiatives to deliver further growth and value. Notwithstanding the current challenges in the market environment, AOGâs product remains attractive and the market leader.

Additionally, based on certain challenges, the management expects the underlying profit for FY19 would be around $50 million, which is approximately 60.6% lower than the prior year. This might be a reason for the stock to trade lower in todayâs trading session.