What Are Infrastructure Stocks? 3 Infra Stocks Under Pressure- -SRG, WGN And ABC

What are Infrastructure stocks? Infrastructure stocks are the ones that pertain to companies undertaking the infrastructure related projects. Infrastructure can be referred to as the basic facilities and systems that are serving a country and are necessary for an economy to function. The sector takes a prominent position in the government planning agenda, and it is no surprise to witnesses election campaigns, where in the contesting party’s manifesto includes the infrastructure project promises. To understand the concept better, it can be said that infrastructure is as basic as aiding one to commute via roads and connecting people over phones and the internet. Modern economies will cease to function seamlessly if the infrastructure is not well maintained and accessible. Countries are rated as developed or undeveloped based on the overall quality of infrastructure in place. Infrastructure can be of two types- hard and soft. Hard infrastructure refers to the physical structures and networks- like roads, railroads, airports, electric grid, cell towers, water systems etc. Soft infrastructure is basically the institutions of an economy like the banking services, legal enforcement and government-related services etc. What is the importance of Infrastructural investment? Considering the basic requirement of infrastructure, government and private players like companies are always required to keep investing in various projects, to ensure the smooth functioning of an economy. It should also be noted that infrastructure is mostly a physical concept and is therefore prone to wear out with usage. Maintenance is a constant need of the hour, along with new infrastructural requirements to support economic growth. Types of Infrastructural Investments: There are 3 categories in which the infrastructure industry can be broken down to: What drives the Infrastructural Industry? There are 3 major drivers that affect the need for infrastructural industry. These are briefed as under:   Few players from across the globe: Below mentioned are few stocks that are the market leaders when it comes to Infrastructural stocks: Australia and Infrastructure: Laying the focal point on Australia, market researchers believe that the country has been actively selling infrastructure to the private sector over the years to aid in funding of new projects. There has hence been privatizing of assets to finance the construction of new ones. Australia's construction sector has undergone a slump and has moved sharply into reverse according to official sources. There had also been a weakness in the public sector spending on big infrastructure projects. Besides this, the Engineering construction, which comprises of huge infrastructure projects, had recently recorded its lowest activity reading in the past couple of years, according to market researchers. Considering this, let us now know about 3 companies listed on ASX, their latest updates and stock performance. Company Profile: An engineering-led construction, maintenance and mining services group, SRG deals with issues pertaining to the entire asset lifecycle. The company designs, produces, and supplies construction and ground support products along with operational expertise. Its Global head office is in Subiaco. Other offices are in New Zealand, the Middle East, Asia Pacific and the USA. The company acquired TBS Group in March last year and six months later, the company and GCS (ASX: GCS) merged to form SRG Global. 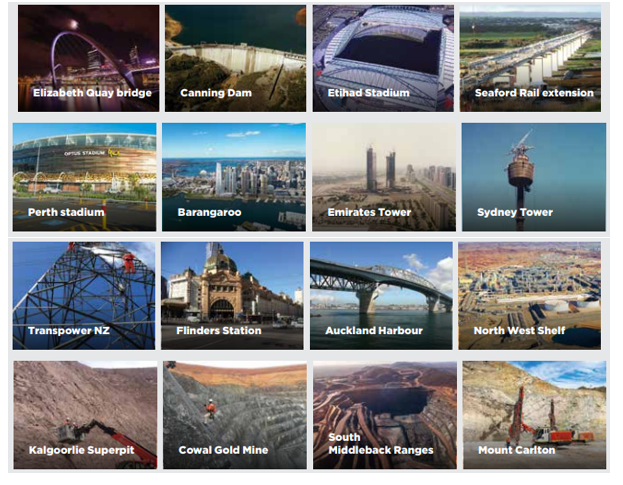 SRG’s key projects (Source: Company brochure)  Recent Updates: On 4th June 2019, the company announced that it had entered into a three-year contract renewal with Transpower New Zealand Limited with the intention to provide specialist industrial services. The services provided would be inclusive of application of industrial protective coatings, using specialist blasting to remove existing coatings and minor steel replacement. The company has been long associated with Transpower and previously provided Asset Services to the National Grid. The anticipated revenues from the contract are most likely to be approximately NZ$35 million. The contract needs minimal capital outlay and is deemed to provide further long-term recurring revenue. On the same lines as the above announcement, the company on 30th May notified that it had sealed a long 6-year term contract with OneSteel in Whyalla, South Australia. The initial 4-year contract has the capacity to stretch further by 2-years. The motive behind this contract is to provide refractory services throughout the Whyalla Steelworks site, which would include ironmaking, steel products assets, incorporating the pellet plant and steelmaking. The anticipated revenues from the contract are most likely to be approximately $30 million in the initial 4 years and almost $45 million if the term is extended. Continuing its contract spree., the company announced on 27th May that it had signed an initial 3 year contract with the option to extend by 3 more years, with South32 Worsley Alumina to provide engineered access solutions in the Worsley Alumina operation, generating a revenue of almost $32 million in the initial period and $60 million, if extended. Share Price Information: At the market close on 12th June 2019, the last recorded stock price was A$0.425, down by 4.494%. It has generated a negative YTD return of 11.00%. Company Profile: A diversified Australian construction services and materials provider, WGN is an innovative manufacturer of New Generation Building Materials. It operates in domestic and international markets and works towards the development of new technology to reduce the impact of heavy construction materials on the environment. Besides this, the company also provides transport services, reinforcing steel and precast concrete. Recent Updates: On 23rd April 2019, the company announced that it had filed a Statement of Claim in the Supreme Court of Queensland against Boral, regarding the matter of suspension of the supply of cement products to Boral (ASX: BLD). BLD had issued a Pricing Notice under the Cement Supply Agreement between both parties and a process to check its validity had commenced earlier this year. Given the financial impact on the company from the issues, the FY19 guidance was revised and reduced by approximately $10 million until the litigation process would be sorted. Post this, the EBIT earnings for the full year FY19 would range between $25 million and $28 million. Once and if the litigation is in favour of the company, the revenue and earnings would be restored. The company had conducted an investors presentation In February this year and notified about its financial result for 1H19. The important financial highlights are depicted in the image below: 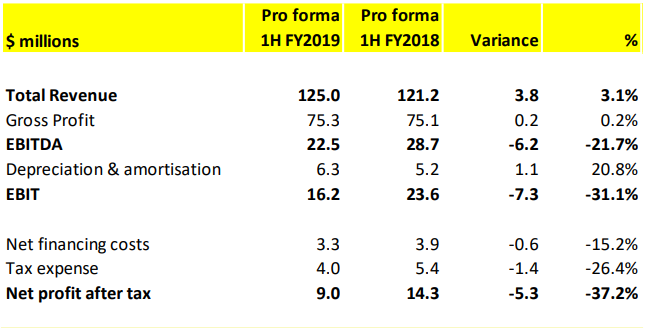 (Source: Company’s report)  Share Price Information: At the market closed on 12th June 2019, the stock price was last recorded at A$1.785, down by 0.557%. It has generated a negative YTD return of 44.94%.   Company Profile: A player in the manufacturing and supply of products used in building, construction, infrastructure, and mineral processing throughout Australia, ABC has its focus on the engineering, infrastructure and resource sectors. It is a leading manufacturer in lime and cement. 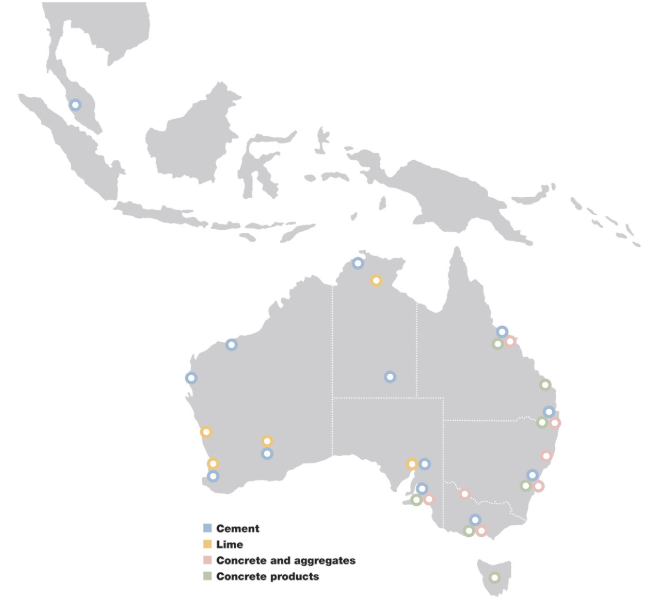 Company locations (Source: Company website)   Recent Updates:  The company made an Investor presentation on 12th June 2019 on the CCZ Equities Austen Quarry site tour. It explained its industry position in Australia stating that: The company’s main strategies as highlighted are listed below: Specifically referring to the Austen Quarry extension, the company stated that a key factor for the successful operation of a quarry is the management of the resource including management during extraction, management of extraction consents and Long-term planning including the quarry end-use. On 13th May, the company announced that it had signed a 5-year contract with OZ Minerals Limited (ASX:OZL) with the motive to continue the cement supply to the OZ Minerals Prominent Hill Operation. The contract could be further extended as well. The company would supply aggregate and sand from its Sellicks Hill Quarry and Price sand operation along with providing supplementary logistics services. Share Price Information: At the market close on 12th June 2019, the stock last traded at A$4.170, down by 1.185%. With a market cap of A$2.75 billion, the stock has generated a YTD return of 0.41%. The 3-month return has been a negative 8.05%.