Australia is witnessing rapid growth in the technology industry, which is majorly focused on meeting customer demand. In this article, we are discussing two IT sector players, which are also registering robust growth in terms of new customer wins and revenue generation.

Let’s have a look on the recent business updates of Afterpay Limited and WiseTech Global Limited, which have delivered returns of 149.17% and 51.03% on a year to date (YTD) basis, as of 9 December 2019, respectively.

Afterpay Limited is an IT based company, which operates in the payment segment and offers services like ‘buy now, receive now and pay later’.

The stock of APT climbed ~9.66% during the last one month (November 2019), on account of strong business growth in the recent past, in addition to positive results from the Independent Auditor concerning the AUSTRAC notice. The external independent auditor, in its final report, has confirmed that the company’s current program is aligned with the AML/CTF Act. The auditor further notified that APT is a low risk business, concerning its exposure to the use of money laundering or terrorist financing.

Meanwhile, the company reiterated that it did not recognise any activities related to money laundering or terrorism through its systems.

Afterpay Limited released its monthly numbers for November 2019, wherein the company reported $1.0 billion of underlying sales, the highest monthly performance since the inception of APT. The company registered total underlying sales of $3.7 billion during the first five months of FY2020.

Active customer base stood at over 6.6 million at the end of the reported month, up ~0.5 million from October 2019. The company reported addition of more than 22,000 new customers to the Afterpay platform on a daily basis in November 2019.

From the US segment, the company derived more than 3 billion of customers, which is equivalent to the combined market of Australia and New Zealand after approximately 19 months since launch. The company reported more than 500,000 active customers, after approx. 7 months from the launch of Afterpay across the UK.

APT also reported strong growth in new and repeat customers across Australia and New Zealand. As per the merchant portfolio is concerned, the company reported ~42,500 active merchants engaged in offering Afterpay to their customers.

At the end of November 2019, the company announced the successful completion of the private placement to US based technology investor Coatue Management. The placement involved 7,017,544 shares of APT at a price consideration of $28.50 per ordinary share.

These shares rank equally in all respects with the existing fully paid ordinary shares in the company from their date of issue. The company would direct the proceeds towards targeting global platform expansion opportunities beyond mid-term plan deliverables.

WiseTech Global Limited is an IT based company, which provides services to the clients primarily in the logistics sector. Recently, the company informed regarding the issue of 2,260 fully paid ordinary shares at a price consideration of $27.42 per share.

The company held the annual general meeting of shareholders on 19 November 2019, during which the WTC performance during FY19 ended 30 June 2019 was discussed. During the year, business continued to experience strong growth, with focus on innovation.

WTC reported revenue of $348.266 million in FY19, compared with $221.598 million in FY18. The company reported higher expense from product design and development at $84.170 million as compared to $53.372 million in FY18. Net profit for the period stood at $54.089 million, up 33% from $40.794 million in the previous financial year. The business reported more than 12,000 customers across the globe followed by more than 50 billion annual data transactions in CargoWise category. 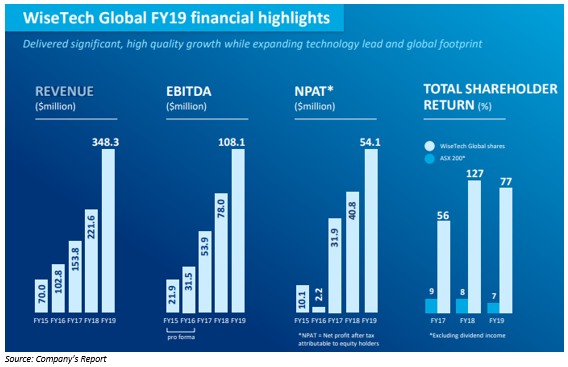 Other Business Highlights in FY19

CLICK HERE FOR YOUR FREE REPORT!
Tags:
Technology ASX: WTC ASX: APT
All pictures are copyright to their respective owner(s).Kalkinemedia.com does not claim ownership of any of the pictures displayed on this website unless stated otherwise. Some of the images used on this website are taken from the web and are believed to be in public domain. We have used reasonable efforts to accredit the source (public domain/CC0 status) to where it was found and indicated it below the image.