Mineral exploration company, Boadicea Resources Ltd (ASX: BOA) is engaged in the exploration of nickel, copper, gold and lithium deposits across different projects located in the most vibrant mining jurisdiction of Western Australia. Diversification of commodity portfolio is also largely helpful in offsetting the risk associated with one particular industry.

Speaking of Western Australia, the benefits of mining in such a well-known location globally include higher chances of success, underpinned by other exploration companies’ experiences.

According to Fraser Institute’s latest Annual Survey of Mining Companies 2019, Western Australia has been ranked as the top jurisdiction (amongst 76 globally) in the world for investment based on the Investment Attractiveness Index, which takes both mineral and policy perception into consideration. This very well implies good fortune for the companies currently engaged on the grounds of this highly prospective location. In 2018, Western Australia was ranked at the second position. Finland moved to the second place followed by Nevada, as per the 2019 ranking.

At the same time, based on the Policy Perception Index (PPI), a composite index that measures the overall policy attractiveness of mining jurisdictions as a region’s policy climate is an equally important investment aspect as are the geologic and economic considerations, Western Australia lies in the top 10 ranked jurisdictions as per its index score with the top most being Finland.

Western Australia’s ranking also comes at a time when the 2019 resources export figure amounted to $ 290 billion for Australia, as per the recent trade data released by the Australian Bureau of Statistics (ABS).

Further, this demonstrates the sound regulatory regime as well as competitive taxes that are extremely attractive for mining and exploration companies in Western Australia, a major aspect considered by investors while choosing the stocks to invest in.

BOA is currently expanding on its ground position via the acquisition of more and more tenements in the Fraser Range, approximately 200 km south east of Kalgoorlie. The Fraser Range Nickel Belt hosts nova-style high-value targets and this province is fast-developing with large known resources still unexplored due to only little mining in the previous years, presenting a lucrative opportunity for the Company to identify new nickel deposits and capitalise on the same. 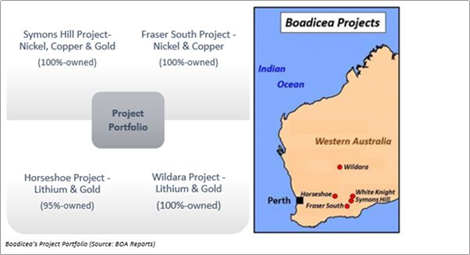 It is noteworthy that Boadicea Resources is presently the only non-aligned, strategic listed Company in the Fraser Range region with its landholding totalling as expansive as 722 km². Three of the Company’s most strategic licences are Symons Hill (key exploration region), White Knight and Transline Exploration Licences.

Currently an explorer, Boadicea Resources’ position on the mining industry curve is further bolstered by the commodities under its purview of exploration – Nickel, Copper, Gold and Lithium.

Nickel - Nickel is the second most abundant element in the earth’s core after iron ore and a Tesla 2019 model S contains ~75kg of this metal. Australia hosts nearly 26% of the world nickel resources and the production totals around 200,000 tonnes every year with the major demand coming from the global steel industry.

As per the Australian Department of Industry, Science, Energy and Resources, nickel prices are expected to exhibit some stability in 2020 after a period of volatility in 2019. This is because strong nickel consumption is expected to support price rises while new projects and expansions are expected to lift Australia’s export volumes.

Copper - An average household contains nearly 180 kg of copper while it is also vital in electric vehicles. Australia stands second in terms of presence of natural copper resources and copper exports totalled ~ $ 10 billion in 2019 with the largest consumer being China. Due to the impacts of COVID-19 lowering copper consumption and demand, copper prices are expected to stay low as the global economic scenario continues to evolve.

Gold and Lithium - Boadicea Resources, with two lithium and gold projects, is still assessing these opportunities through various stages of technical studies. Australia has the world’s largest economic demonstrated resource of gold while it is forecast to be the top producer of gold in 2021 as gold prices are expected to touch 7-year high of USD 1,475 an ounce (in real terms) in 2020, owing to the COVID-19 outbreak.

Australia is also the largest lithium exporter in the world and the consumption for this metal is expected to rise significantly in the upcoming years.

Targeted Commodities: Nickel and Copper to Have Upswing in Demand