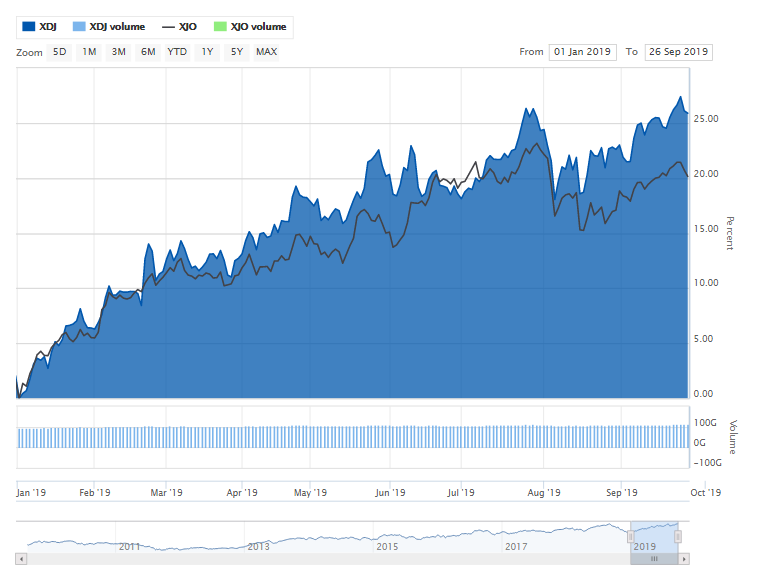 One can see that both the indices have moved hand-in-hand so far in 2019, with XJO delivering a return of 20.7 per cent, while XDJ generating a return of 24.75 per cent (calculated till 26th September 2019).

Considering this, let us take a look at five consumer discretionary companies listed on the ASX along with their recent updates:

Australiaâs leading digital retailer of charitable and official government lotteries, Jumbo Interactive Limited (ASX: JIN) utilises the state-of-the-art technology to create an entertaining and engaging purchase experience for its customers across a variety of digital platforms. The company was founded in 1995 and introduced e-commerce in Australia after creating and launching one of the globe's first online shopping malls. The company continues to invest in digital marketing technologies, mobile and smartwatch apps for lotteries.

The company released its consolidated Annual report for the year ended 30 June 2019 in August this year. Jumbo notified about an increase of 303 per cent in its share price from $5.00 in FY2018 to $20.15 in FY2019 in the report. The company also mentioned that its Total Transaction Value and Net profit after tax improved by 75 per cent and 125 per cent to $321 million and $26.4 million, respectively, during the period.

The company achieved a massive growth of 64 per cent in its revenue from continuing operations during the period, to $65.2 million.

Australian-headquartered Collins Foods Limited (ASX: CKF) is a franchisee of KFC and Taco Bell in Australia, a franchisee of KFC in Germany and the Netherlands, the franchisor for Sizzler in Asia and the owner of Sizzler restaurants in Australia. Collins Foods operates premier brands where people are proud to work and love to eat and aims to become a leading restaurant holding company. The company operates from Queensland and Brisbane.

Australian-headquartered Lovisa Holdings Limited (ASX: LOV) develops new products with regards to evolving fashion trends. Operating across 390 stores in 15 countries, the company has been engaged in the retail sale of fashion accessories and jewellery. The company usually delivers 150 new styles to its stores each week, giving an exceptional customer service.

The fashion retailer has recently released its consolidated financials for the year ended 30th June 2019. The company notified that its comparable sales reduced by 0.5 per cent; however, it added a net 64 stores during the period, continuing its offshore expansion. 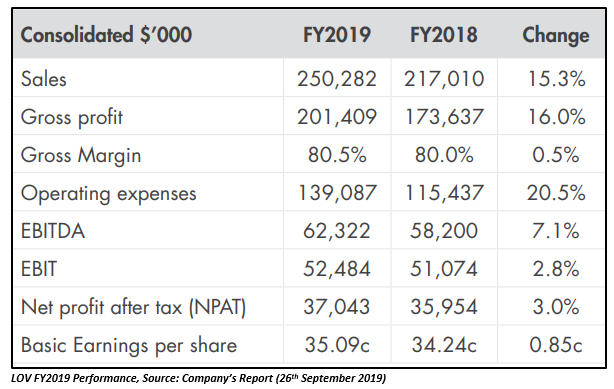 During the year, the net cash flow from operating activities improved by $8.3 million to $68.9 million. The company recorded a cash balance of $11.2 million at the end of the period.

LOV is currently trading at $13.230 (As at 12:35 PM AEST on 27th September 2019), with a rise of 0.08 per cent relative to the last closed price. The stockâs market cap was recorded at $1.4 billion, with approximately 105.8 million outstanding shares. The stock has delivered a substantial return of 517.76 per cent since it commenced trading on the ASX.

The company has recently released an update on its sales performance for the second quarter of the financial year, i.e. for the 16 weeks ended 9 September 2019. The company reported an increase of 3.5 per cent or $8.8 million in its total sales to $259.7 million during the second quarter. The company notified that each of its operating divisions (Australia, Hawaii and New Zealand) has retained their strong store sales growth with a rise of 5.8 per cent, 9.6 per cent and 5.4 per cent, respectively.

The largest child care centre operator in Australia, G8 Education Limited (ASX: GEM) was founded in 2006 and aims to become the leading provider of educational, high quality and developmental child care services in Australia. The company got listed on the Australian Stock Exchange on 5th December 2007.

Take a look at the companyâs half?year performance for the period ended 30th June 2019 below: 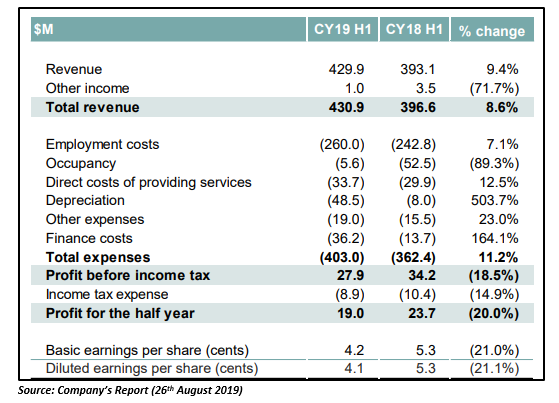