Keeping Faith in the Economy when Worst is Ahead

The adverse consequences are already evident with financial markets facing increased risk aversion, 10-year bond yields and equity prices falling to historic lows, and dismal business and consumer sentiment all around the world.

Kristalina Georgieva, head of IMF has warned that the pandemic will result in sharp negative global economic growth for 2020.

IMF has asserted that COVID-19 will force the global economy into the worst recession that has not occurred since the Great Depression. The pandemic is expected to hit the most vulnerable countries the most. It anticipates that about 170 countries are set to witness a negative per capita income growth in 2020.

The Fund found it encouraging that government worldwide have been proactive in taking fiscal measures which are worth USD 8 trillion along with enormous stimulus given by the central banks.

IMF is planning to add to Catastrophe Relief and Containment Fund, that provide grants to poorest countries to cover IMF debt service payments, USD 1.4 billion from about USD 200 million. The Fund asserted for the need for debt relief and to increase IMF’s financial firepower so that it can lift more poor countries from the crisis.

UN has­­­­­­ forecasted that global GDP could fall by up to 1% in 2020 due to the virus pandemic, reversal from previous growth forecast of 2.5%.

As per the Interim report of OECD for March, projected annual global GDP growth would drop to 2.4% in 2020 from an already weak 2.9% in 2019 with a possibility of growth being negative in Q12020.

The firm stated that if each month the containment happens, there will be 2% deterioration each month in the annual GDP growth. While if the shutdown persists for 3 months, the corresponding fall will be 4-6% lower than the normal.

The coronavirus that first originated in the Wuhan district of China has taken away 1,00,000 lives to date infecting more than 17,00,000 people, spreading in 210 countries. With the number of cases still on the rise with the US now becoming the epicentre, the virus is causing severe loss of lives and the needed lockdowns to stop it is already putting economies on the verge of recession.

ALSO READ: Key Things We Learnt about Economies and Equity Markets Amid Crisis

As per The International Labor Organisation, UN agency about 81% of the 3.3 billion global workforces have now fully or partially closed their workplace due to the virus impact. The outbreak is expected to wipe off 6.7% of the working hours during Q2 of 2020, which is equivalent to 195 million full-time workers will be rendered jobless.

Different sectors have been hit in various ways due to the abrupt slump in work. Accommodation and food, retail and manufacturing are at the most risk due to isolation requirements and travel bans put by the governments due to coronavirus impact. 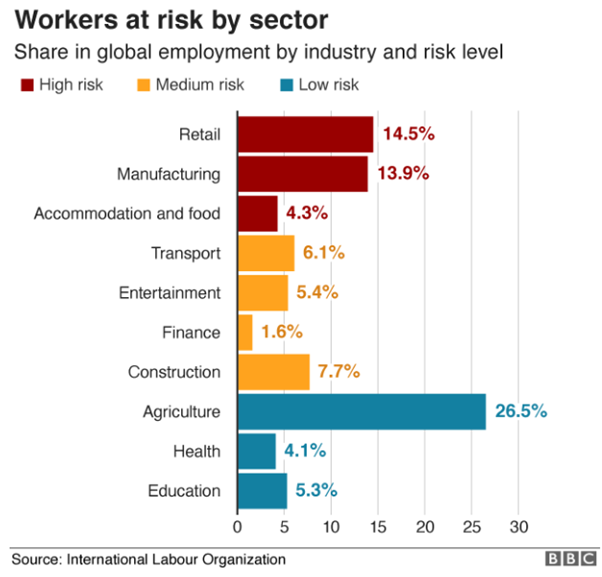 Australia came under the cobweb of the deadly pandemic during late January 2020. Initially, the impact of coronavirus pandemic was restricted to tourism and education sector. Later with restrictions on travel from China and limitations in the domestic economy have resulted in a noticeable impact in March. While retailers have witnessed exceptionally high demand, cafes, restaurants and other leisure industries have been viciously shaken, in some cases temporarily closed.

Australia has had 6332 coronavirus cases so far with 61 deaths to date.

The number of rising cases has reduced now growing at a rate of 9% than 25-30% a week before. Few officials have stated that flattening the curve is on the cards for Australia.

The Finance Minister of Australia is confident on the economy to bounce back strongly once the coronavirus crisis ends.

From providing help to 6 million workers under its JobKeeper program, supporting households to early releases of superannuation temporarily, the country has already pledged a massive $320 billion stimulus package to fight the coronavirus pandemic. He added that measures of about 16.4% of the GDP had been put in place. However, he assured that no changes are being made that can have a heavy burden on the budget over medium to long term on a structural basis.

RBA has been taking specific actions to improve the credit flow within the economy through open market operations. On 7 April, the monetary policy board held the cash rate constant at 0.25% while on 19 March, the bank initiated to keep the yield of 25 bps on 3-year government bonds by buying bonds via regular auctions through the market.

ALSO READ: Where is the economy heading to- RBA’s Eye

RBA Governor Philip Lowe stated in the latest monetary policy that 3-year Government bond yield is around the target level now and assured to reach the 3-year target yield with the target to be in place till full employment and inflation is attained. The bank has already bought government bonds worth $36 billion and pumped substantial liquidity into the system via daily market operations.

Also, first drawings were undertaken under RBA’s term lending facility, which is expected to reduce funding costs of banks and provide lenders with an incentive to support credit to small and medium-sized businesses.

RBA also released its biannual Financial Stability Review, which stated that the lenders of the country had entered the downturn with high profitability and great asset performance. The bank asserted that the financial system is well placed to handle the deteriorating effect of the pandemic on households and businesses.

However, RBA cautioned that a rise in failures of businesses and loan arrears are anticipated over the coming months. Some risks are also expected for the property market due to the possibility of a decline in property prices.

Demand has already slumped in the residential property market, which can increase the risk of negative equity if prices fall. Auction volumes and clearance rates have already plunged in Melbourne and Sydney, the two largest markets in Australia. 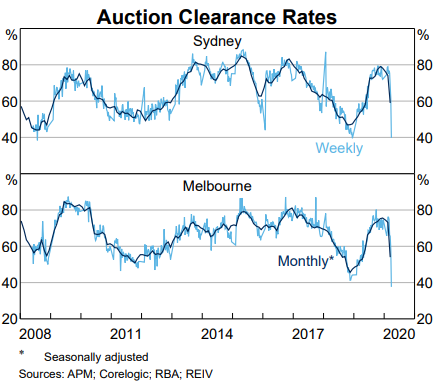 Various monetary and fiscal actions taken by the country are anticipated to lessen the economic contraction putting the economy in a safer place to recoup. Though the corporate balance sheet remains healthy to tackle the pandemic impact with added government support, the magnitude of the tremor will test the real financial flexibility of many businesses.

Hence, uncertainty remains what route the economic fallout and subsequent recovery will follow. Once the country recovers from the virus, restrictions will be essential until a vaccine is found.