Such result may have forced short sellers to cover some of the reported short positions, which were around 12.7 million as of 4 February 2020, according to ASIC.

The company is the number one player in the Australian market with the opportunity for further consolidation. It has global supplier spread relevance with investments spread across a large base that drive efficiencies.

The company has a low cost of doing business as against its peers due to productive floor space with higher sales per square metre, continued emphasis on productivity and minimising unnecessary expenditure.

It is said that the business has strong partnerships with all major suppliers locally as well as globally. The company’s store locations and high traffic websites provide the supplier with higher visibility for their products.

Its teams are cognizant about the product specifications and benefits. JB Hi-Fi runs a dual-brand retail approach with the ability to execute strategic initiatives at scale as well as ranging and merchandising ability.

JBH’s integrated, high quality in-store and online offering provides customers with a choice. Its store network provides fast online fulfilment through delivery from the store and click and collect. Online customers get access to after-sales support and services.

In this segment, hardware and services sales increased by 7.8 per cent with comparable sales growth of 7 per cent, which was driven by categories including communications, audio, computers, visual and accessories.

Software sales, comprising 8.3 per cent of total sales, came down to 18.2 per cent with comparable sales down 17.9 per cent due to prolonged declines in movies and music categories along with a substantial decline in games software.

Share of online sales reached 6.3 per cent of the total sales as against 5.6 per cent in the previous corresponding period, and it grew 18.3 per cent to $170.8 million.

In JB Hi-Fi New Zealand, the business recorded sales of NZD 138.8 million with comparable sales up 0.8 per cent. However, the second-quarter sales moderated as a result of strong comparable sales in the second quarter of last year.

Key growth areas were communications, accessories and fitness, and online sales were 7.3 per cent of total sales, recording growth of 22.3 per cent to NZD 9.6 million. Its gross margin was down 16 basis points due to sales mix. 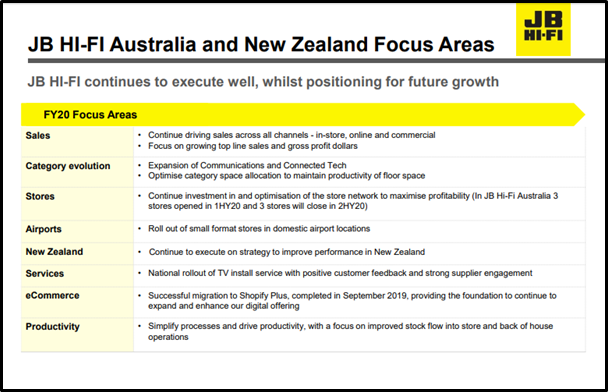 Its key segments were dishwashers, floorcare, cooking, communications and computers, and the company is pleased with its performance in the large home appliance category in a challenging market.

Online sales were 6.9 per cent of the total sales as against 6.3 per cent in the previous corresponding period. Its online sales increased by 12.6 per cent to $79.6 million, and there was a decline in sales from the third-party marketplaces.

The segment recorded a gross profit of $237.6 million with gross margin improved by 8 basis points to 20.7 per cent. Its sales growth, gross margin expansion and cost control resulted in a strong EBITDA growth of 12.2 per cent.

The retailer has announced a fully franked interim dividend of 99 cents per share, indicating growth of 8.8 per cent over the previous corresponding period. It would be paid on 6 March 2020 to the shareholders in records on 21 February 2020.

Total group NPAT, pre AASB 16, is expected to be in the range of $265 to $270 million, indicating an increase of 6.1 to 8.1 per cent increase over the previous corresponding period.