The Australian economy possesses the largest economic demonstrated resources in the world, including mineral sands, uranium, zinc, nickel, and coal, among others. The Metals & Mining sector of Australia is a leading industry sector with more than 650 companies engaged in mineral exploration, development and production in 100 countries.

The ongoing pandemic has had a debilitating impact on the Australian economy sparing no sector. The resources sector, a significant contributor to the Australian GDP, has struggled as well. However, with the ongoing recovery in the country, the sector is likely to benefit and get back on track and resume its operations.

Let us have a look at six ASX-listed companies related to the resources sector that are under the spotlight:

Newcrest Mining Limited (ASX:NCM) is involved in the exploration, development, mining and the sale of gold. Recently, the Company has priced senior unsecured notes amounting to US$1.15 billion in the US. The Company will utilise the proceeds to repurchase existing near-term corporate bond maturities.

Also Read: How these gold stocks are gaining momentum?

Equity Raising to Take Future Benefits: Newcrest Mining Limited has opened its share purchase plan (SPP) for eligible shareholders to apply for up to $30,000 of new fully paid ordinary shares without incurring brokerage, commissions or other transaction costs. The Company would raise around $100 million through SPP. This follows the successful completion of $1.0 billion placement to institutional investors.

Cooper Energy Limited (ASX:COE) is engaged in oil & gas exploration and production. The Company mainly generates revenue through the supply of gas to South-East Australia as well as low-cost Cooper Basin oil production.

Recently, the Company provided an update on Orbost Gas Processing Plant and Sole gas field production, which is managed by APA Group:

The Company recently released its operational and financial performance for the 1H FY20 and outlined the following: 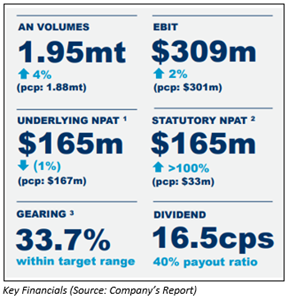 Pilbara Minerals Limited (ASX:PLS) in the exploration of lithium and tantalum. The Company is also involved in the development of mines.

Well-Placed for Future Supply: 100% owned Pilgangoora Lithium-Tantalum Project of the Company is well placed for the future of lithium raw material supply. During March 2020 quarter, the Company has inked a five-year 75,000tpa offtake agreement with Yibin Tianyi. PLS maintained a strong balance sheet through moderated production strategy and cost reductions to ensure PLS is well placed to capitalise on the market turnaround.

The improving situation in China along with the EV subsidy program extension in the world’s second-largest economy is expected to have a favourable impact on the PLS, which has had a strong performance in the year so far.

Alliance Resources Limited (ASX:AGS) is involved in the exploration of gold and base metals. The Company has its projects in South Australia and Western Australia.

The Company recently completed RC drilling at the Weednanna Gold Deposit and provided assay results, which primarily include

The Company mentioned that the RC drilling was resumed in May 2020 to better define the distribution of gold at Shoots 2 and 10. As on 31 March 2020, the Cash reserves of the Company stood at $0.63 million.

Davenport Resources Limited (ASX:DAV) is in the mining exploration. As a part of Board restructuring, DAV has appointed Dr Reinout Koopmans on the role of interim Non-Executive Chairman. The Company has also commenced a global search for a permanent Chairman.

DAV has executed numerous cost reduction strategies in response to the COVID-19 and the uncertain economic and market conditions. These measures include the following: