In this article, we discuss five stocks that have been increasingly showing positive movement in the last five days. Majority of the stocks under discussion are from the Financials sector, comprising of banks and investment managers. However, Treasury Wine belongs to the Consumer Staples sector.

UK-based CYBG PLC is a comprehensive banking group with several brands in the market. Last month, the bank had disclosed an increase in legacy Payment Protection Insurance (PPI) cost.

In the Q3 Update, the group had highlighted an increase in the information requests, but it was early to determine the estimated impact. Therefore, the company had updated the market in September.

In September, the group had notified on the increasing PPI cost estimates, as the deadline approached. Although the estimated provisional cost impact was based on historical assumptions and conversion rate. Provisional legacy PPI cost estimates were in the range of Â£300 million and Â£450 million.

It was said that the group is working to process the significant number of information requests, and more accurate numbers would be provided at its full-year results on 28 November 2019.

In the half-year results ended 31 March 2019, the group was making profit, following a loss incurred in the previous corresponding period. The group had depicted profitability despite experiencing cost associated with the acquisition and integration.

Recently, the companyâs directors had collectively acquired 2,680 shares, and the company has issued 2,680 shares as a result of exercising performance rights, according to the exchange filings dated 15 October 2019. 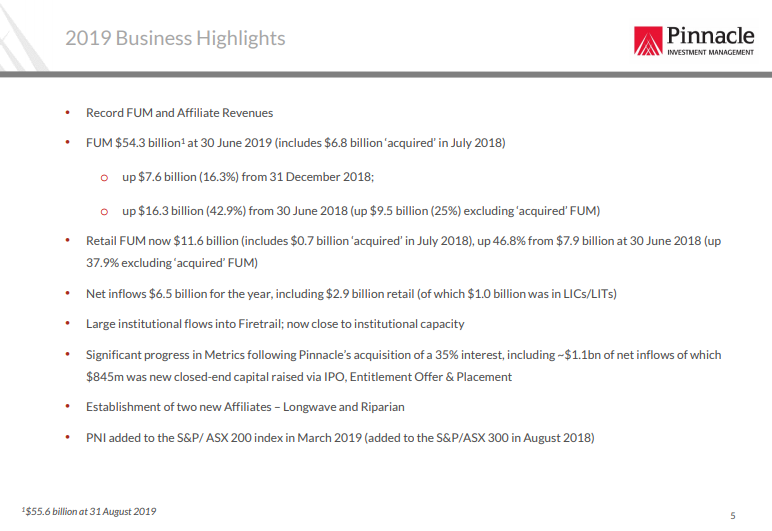 Challenger Limited has disclosed the first-quarter results (September 2019) on 16 October 2019. The headline numbers included an increase of 3% in the AUM and strong results in the life segment supported by Japanese annuity and other life sales.

Mr Richard Howes, CEO & MD, stated that the results depicted the progress made by Challenger in diversifying its product base across life & fund management verticals. He said that the institutional investors are preferring guaranteed income products amid a low rate environment.

According to the release, the total life net flows for the quarter were $766 million, resulting in sequential life book growth of 3% of opening FY20 liabilities for the quarter. Total life sales of $1,778 million were up 89% or $839 million, on sequential terms, driven by favourable results from Japanese annuity sales and others.

In Australia, the annuity sales were tracking $78 million lower or down 11% over the previous quarter, attributing to sector-wide disruptions caused by Royal Commission. Fixed-term sales increased by 18%, while lifetime sales decreased by 62%, on sequential terms. 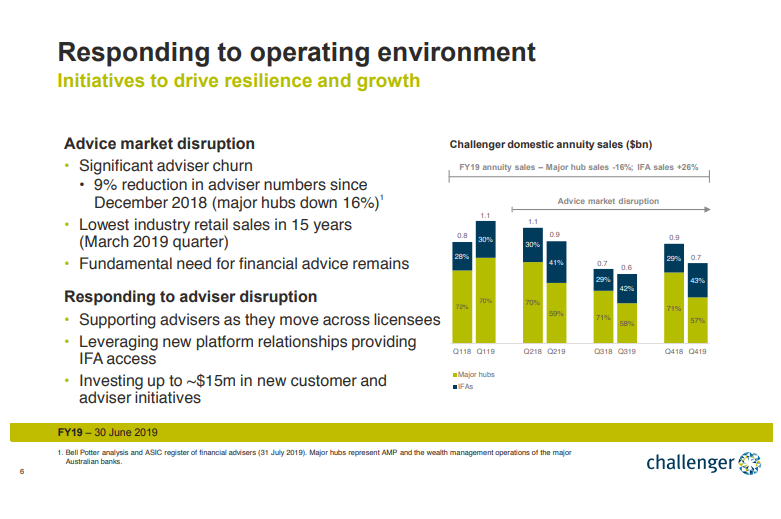 Further, the life segmentâs investment assets were $1.9 billion, an increase of $0.7 billion for the quarter at 30 September 2019, representing quarterly net book growth and changes in retained earnings.

Reportedly, the company had $81 billion in funds under management, depicting an increase of $1.9 billion or 2% for the quarter over the previous quarter, benefiting from net inflows and favourable investment market.

It was reported that the FUM for the quarter was down 1% or $0.9 billion at $100.4 billion. The positive global equity market and lower Australian dollar had helped to maintain the level of FUM. The company recorded outflows of $2.3 billion, majorly in the OEICs and Westpac book, and the inflows into the US pooled funds were -$0.5 billion.

Reportedly, outflows in the segment were led by OEICs ~-$1.6 billion mainly in European and the UK region. There were positive inflows in the US pooled funds (+0.5 billion) led by the International Select and Global Emerging Market Opportunities strategies.

In his address, Mr Rayner said that the company delivered another year of high-quality financial results, depicting the commitment of the management towards the strategies. The positive movement has continued amid challenges and macroeconomic landscape.

The company is focusing on premiumisation, existing competitive advantages, engaging customer partnerships, and execution capabilities of the global team. He said that the companyâs Luxury and Masstige portfolio of brands had depicted an attractive contribution along with all regions.