How to Find Value Stocks on ASX

Value Stock: Value stock is a stock that has a good future prospect of growth and trades at a lower price relative to its fundamentals. It is most likely to come from a mature company with stable dividends but is temporarily in a bad condition. Hence, the investor wants to profit on market inefficiencies since the intrinsic value of the security doesnât match the market value. ASX may be trading at high but this doesnât mean undervalued stock are difficult to find.

How to value a stock: Before buying a stock, it is important to learn that the intrinsic value of the stock may or may not be the same as the current market value. Thus, it is important to incorporate all the market information to value a security. P/E ratio is one of the most followed metrics to relatively value a stock. The lower P/E ratio indicates that the company may be undervalued. Investors while valuing a stock must also take into consideration the qualitative factors such as a company's economic condition, competitive advantage and intangible assets.

Let us have a close look at some value stocks.

Investment management firm, Challenger Limited (ASX: CGF) is divided into two operating segments of Life and Fund Management. The Life segment is serviced by the distribution, product and marketing team responsible for the appropriate distribution of Lifeâs product. The Fund Management segment focuses on the retirement saving phase of the superannuation system by providing products with higher investment returns.

Recently Challenger made several announcements regarding the change in substantial holdings.

The company is scheduled to hold its annual general meeting on 31 October 2019.

Final 2019 Dividend Re-Investment Plan: The company, on 20 September 2019, announced that the issue price under the Dividend Reinvestment Plan for the final 2019 dividend is $7.0372 each share. New ordinary shares of the company will be issued targeted towards meeting the DRP requirements.

Dividend: Recently Challenger also gave an update to an ordinary fully paid dividend announced to the market on 18 September 2019. The dividend amount of $0.18 per share for the six-month period ended 30 June 2019 was scheduled for payment on 25 September 2019.

Dividend Distribution: The company announced an ordinary fully paid dividend of 37 cents per share due to the continued strength of Balance Sheet and strong performance of Premier Retail on 20 September 2019 which is to be paid on 15 November 2019.

Business Achievements: Premier Retail delivered 8 consecutive years of EBIT growth, where the underlying EBIT margin to sales went up by 47 bps on FY18. 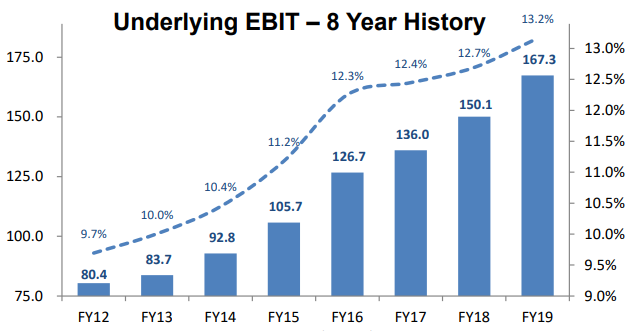 Lovisa Holdings Limited (ASX: LOV) is engaged in the business of retail sale of fashion jewellery and accessories. The company is now trading at 390 stores in 15 countries.

Earnings before interest and tax (EBIT) was $52.5m being a 2.8% increase on EBIT from the prior year. Financing costs were positive during the year following strong cash flow and debt facilities remaining undrawn for much of the year. 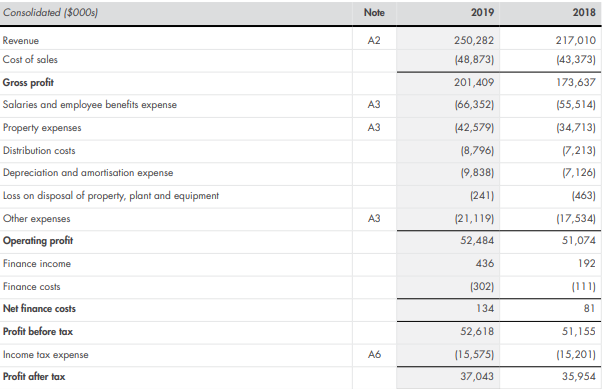 Cash Flow: The Groupâs net cash flow from operating activities increased by $8.3m during the year to $68.9m. Capital expenditure of $24.1m relates predominately to new store openings and refurbishments of current stores upon lease renewal.

Tags:
Challenger Ltd (ASX: CGF) Lovisa Holdings Ltd (ASX: LOV) ASX: PMV
All pictures are copyright to their respective owner(s).Kalkinemedia.com does not claim ownership of any of the pictures displayed on this website unless stated otherwise. Some of the images used on this website are taken from the web and are believed to be in public domain. We have used reasonable efforts to accredit the source (public domain/CC0 status) to where it was found and indicated it below the image.