Group Assets Under Management (AUM) for the full year was around $81.8 billion, slightly up by 1% on pcp. Likewise, the company’s normalised NPBT was also up by 1% to $548 million, in line with the revised guidance provided in January 2019. The growth in the company’s earnings is believed to be impacted by lower equity distributions and lower performance fees. 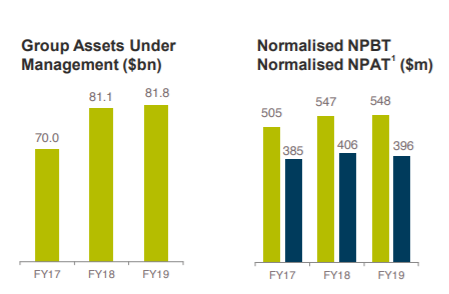 For FY19, the company reported normalised cost to income ratio of 32.6% which is within the targeted range and is lower than the ratio in 2018 (32.7%), reflecting continued cost discipline throughout the business. At the end of FY19, the company had a total equity of $3.6 billion and 687 employees people on a full-time equivalent (FTE) basis.

The company has declared a final dividend of 35.5 cents per share (100% franked), unchanged from the prior year.

For FY19, the company has reported resilient business outcomes. In Life business, the company’s domestic sales were down by 4% in FY19 despite market disruption. The Total Life sales were $4.6 billion, down by 18% on pcp, impacted by both lower annuity and lower other product sales.

The main cause behind the decline in annuity sales was lower MS Primary sales in Japan, which were down by 54% due to higher US interest rates relative to Australia. It is expected that the contribution from MS Primary will increase significantly in FY20 following an agreement with Challenger to reinsure US dollar annuities in Japan, which commenced on 1 July 2019.

The company has intensified its efforts to engage more directly with customers to build bottom-up customer demand. During the year, the company launched a new brand campaign and website to build awareness about Challenger and the benefits of annuities.

In Funds Management business, the company reported EBIT growth of 23% (excluding performance fees) in FY19. At the end of FY19, Challenger Group was strongly capitalised with $1.5 billion of excess regulatory capital and Group cash.

During the year, the company significantly expanded strategic partnership with MS&AD to include US dollar annuities. It also Expanded distribution reach with the launch of BT Panorama platform in first half of 2019, and HUB24 and Netwealth in second half of 2019.

As per Mr. Peter Polson (Independent Chair of Challenger Limited), the company’s business is in good shape to navigate the current operating environment and well positioned to capture opportunities as they emerge. It is believed that the company’s Investment in a range of new Distribution, Product and Marketing growth initiatives in 2020 will support deeper integration with the advice process and build bottom-up customer demand for Challenger annuities.

To understand more about the financial sector landscape of Australia, let’s take a look at the performances of two other financial services companies trading on Australian Exchange.

Financial services company, CYBG PLC (ASX: CYB) recently released Q3 FY19 trading update in which it confirmed that trading in the nine months to 30 June 2019 was in line with the Board’s expectations. The company also confirmed that it is making good progress with the Virgin Money integration programme.

Due to higher redemptions and lower new business volumes, the Mortgage book was reduced by 0.2 per cent to £60.4 billion as depicted in the figure below.

The company witnesses good deposit growth of 1.8% in Q3 with its relationship deposit offerings attracting £0.6 billion in additional balances, particularly driven by strong growth in business current accounts and linked savings balances. In the fourth quarter of FY19, the company expects to recognize an estimated gain on sale of around £35 million from the disposal of c.50% of its interest in Virgin Money Unit Trust Managers Limited. As at 30 June 2019, the company’s CET1 ratio was 14.6%.

The company has confirmed that it is on track to complete its FSMA Part VII process in October 2019 and is progressing towards its target for around £200m of net cost savings by FY 2022.

Australia's leading regional bank, Bank of Queensland Limited (ASX: BOQ) has witnessed a decline of 8.64% in the last six months as on 12th August 2019. Like other leading banks of Australia, BOQ’s H1 FY19 results were also impacted by disruption across the Australian financial services landscape. In H1 FY19, BOQ reported cash earnings after tax of $167 million in 1H FY19, down by 10 per cent on previous corresponding period.

Although BOQ’s asset quality and capital position remained strong during the half year period, it has been a period of significant change for the industry, with the Final Report from the Royal Commission handed down in February 2019, leading to a significant increase in both regulatory requirements and customer expectations for all banks.

In the recent past, the bank has announced various Board and Management changes. Recently, the bank announced the retirement of Chair of the Human Resources & Remuneration Committee, David Willis (Non?Executive Director). Prior to this, the bank had announced the resignation of its CFO Matt Baxby.