Why are Investors eyeing CYBG? Updates on PPI Provision Estimates

Dual-Listed Banking Group, CYBG PLC operates more than a few brands in the banking industry in the UK. These brands include Clydesdale Bank PLC, Virgin Money, Yorkshire Bank and B. In its Q3 updates declared in late July 2019, CYBG faced the impacts of the industry wide PPI complaints, and the group had said that it would provide further updates after the August 29, the deadline date.

Payment Protection Insurance (PPI) was designed to cover repayments of debt in cases where the borrower had failed to make the repayments. The reasons for the non-repayment include job loss, accident, illness, disability or death.

PPI was sold with several loan products, including car loan, student loan, credit card, store card, mortgage, overdraft, hire purchase, home shopping account and so forth. Financial Conduct Authority (FCA) notes that around 64 million policies were sold from 1990 to 2010, some of which which dates back to 1970s.

In a note dated 04 September 2019, CYBG group reported that the frequency of complaints had increased as the deadline approached in August this year, and currently, CYB is working to determine an estimate of the volume of information requests , and complaints in order to proceed with further actions.

Meanwhile, the group had been working to determine an estimate related to costs associated with the PPI complaints, as determining the actual impact will take several months.

In a second release on 04 September 2019, the group mentioned that it was expecting to increase its provisions for legacy PPI cost, between £300 million to £400 million attributing to higher complaints received through the period until the deadline of 29 August 2019.

Meanwhile, the increase was similar in complaints as well, which averaged at an approximate 5k per week in the initial four weeks of August. In addition to this, ~22k complaints were submitted during the final three days to the deadline.

The group will emphasise on working through the volume of information requests. Besides, it anticipates providing an accurate estimate of the costs during the full-year results on 28 November 2019, which might be above or below the estimated range.

The annual report of the group, for the period ended 30 September 2018 had provisioned a figure of £352 million for the period. Besides, the group had decided to increase the provision by £500 million, which was reduced by the remaining balance of capped indemnity.

Further, the total provisions till full year FY2018 with respect to PPI was £2,640 million, up from £2,140 million in FY2017. Meanwhile, operational and administrative cost was incurred due to significant changes in the PPI operations.

In half- year (ended 31 March 2019) report, the group concluded that additional £30 million was required for PPI, mainly due to higher volume of information requests driven by the increased activity through claims management companies ahead of August deadline. Consequently, the total provision with regards to PPI to date had increased to £2,670 million (as noted on 30 September last year).

In half-year results closed 31 March 2019, the group noted a return to profitability after incurring losses in the preceding periods. CYBG had reported a statutory profit after tax of £29 million for HY2019 compared to a loss of £76 million in HY2018.

Besides, the profit was significantly impacted by the acquisition and integration costs associated with Virgin Money. The acquisition provided immense opportunity for the bank to establish as a competitor to the status quo in UK banking.

By half - year 2019, the group had realised £33 million of annual run-rate cost synergies through addressing senior management duplication, and some central cost activities. Closing the half-year period, with six-months into the three-year integration plan, the group had increased expected cost synergies to £150 million from £120 million announced at the time of acquisition. 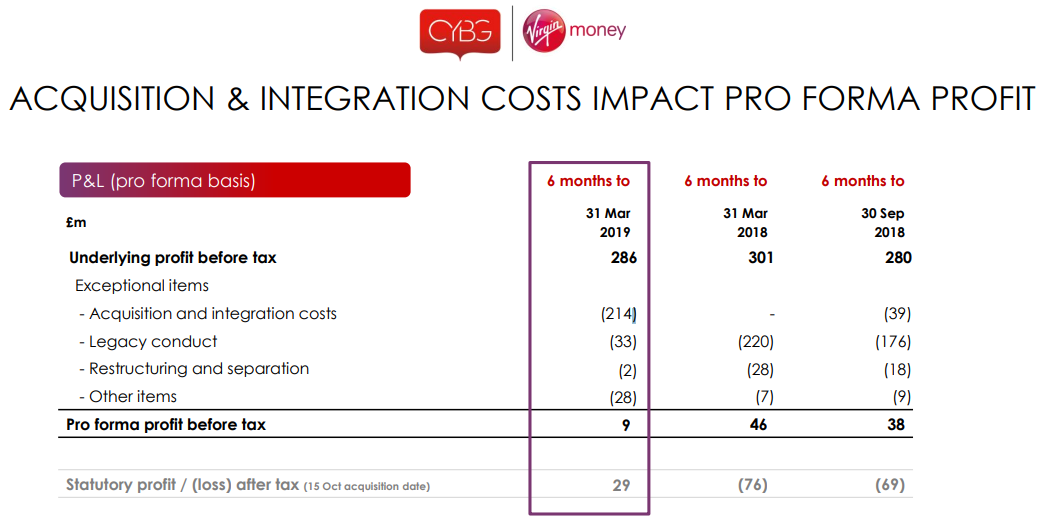 Statutory Vs Underlying NPAT (CYBG Half Year - Investor Presentation, May 2019)

Meanwhile, the notes are rated as BBB- by S&P, Moody has a Baa3, and Fitch Ratings has BBB+. CYBG would be utilising the proceeds for general corporate purposes, and its subsidiaries, including down-streaming of funds to Clydesdale Bank PLC.

More importantly, the notes are prohibited from being sold to retail investors from EEA (European Economic Area). The entitled counterparties and investors (professionals) are the market being targeted by the company, as described in MIFID II.