Investing in stock market is speculative, which means high risk is accompanied with higher returns. However, if an investor looks for some safety of his capital, he should remain invested in such stocks which have the capability to weather market disruptions. These assets could be identified as Blue-chip stocks. Investing in Blue-chip companies can provide more security as compared to mid and small cap stocks which are prone to the vagaries of the market. At the time of market correction or speculation, blue chip stocks do not correct as vigorously as mid and small caps. In the article below, we will be focusing on a few blue-chip companies with their recent updates:

Treasury Wine Estates Limited (ASX: TWE) is involved in sourcing and growing grapes, production of wine as well as marketing, sales and distribution of wine.

The company has recently published a presentation, wherein it communicated about its performance in the past as well as strategies for future:

In the past five years, it has made substantial changes for strengthening its business models in order to create a significant competitive advantage. The following picture depicts overview of CAGR growth in EBITS: 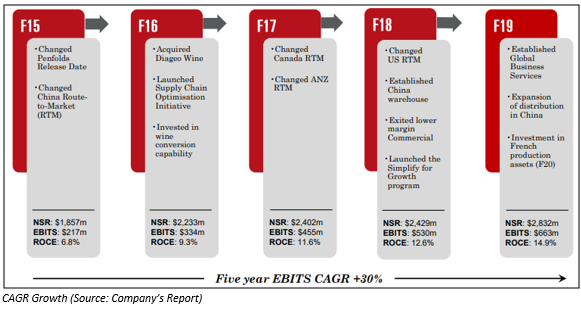 Oil Search Limited (ASX: OSH) is into exploration of oil and gas fields. It is also involved in the development and production from such fields. Recently, the company has published a presentation, wherein OSH primarily stated about its 2019 highlights as well as production outlook for 2019:

Sydney Airport (ASX: SYD) is into operations of Sydney Airport with a market capitalization of A$18.5 billion as on 15th October 2019.

Changes to the Board and Compliance Committee

The following picture depicts an idea of traffic performance for the month of August 2019:

The company has recently updated the market participants with the financial results for the full year ended 31st July 2019:

Woodside Petroleum Ltd (ASX: WPL) is primarily into the management and operation of hydrocarbon. The market capitalization of the company stood at A$30.15 Bn as on 15th October 2019:

For the half-year ended June 2019, the company reported net profit after tax amounting to $419 million. It added that the production for the first half stood at 39.0 MMboe and operating revenue came with a figure of $2,260 million. In the period, the Board of directors of the company have declared interim dividend amounting to 36 US cents per share.

WBC has noted the release of a discussion paper by the Australian Prudential Regulatory Authority, wherein the revisions to APS 111 Capital Adequacy: Measurement of Capital was mentioned: