SaaS or Software as a Service is a software distribution model, under which a third party provides the end-users with application or software over the internet. SaaS is also known as web-based software, on-demand software, or hosted software, enabling users to access the application or any software without the need for software download and installation. As a result, end users save a lot of time, money, and space and efficiency of the system.

Australians are one of the fast adopters of digital services and technology, globally, with their average usage of internet above average rate as compared to any other OECD countries. More and more businesses try to bring or increase digitalisation by integrating digital technologies into their business practice. From 1994 to 2018, there has been a sharp increase in computer system design combined with related services and internet services.

In this article, we are discussing two ASX listed SaaS companies. 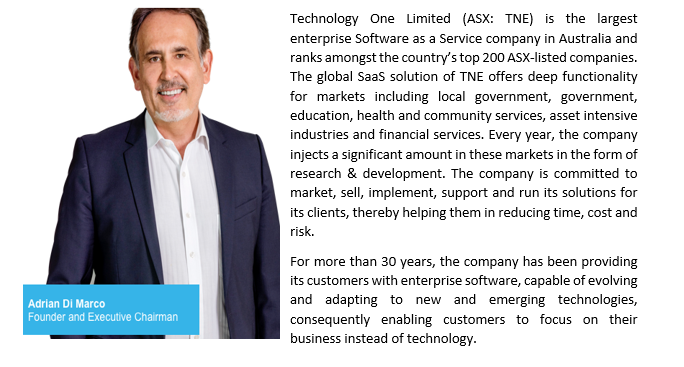 Adrian Di Marco, the founder and executive chairman of Technology One Limited, started the company in 1987 after securing support from the owner of one of his old company customers from early 1980s, Dugald Mactaggart who was the owner of JL Mactaggart Industries. Since Mr Mactaggart was positively influenced by the service received over the years, he did not hesitate to support Adrian Di Marco in raising the funds to start the company. He not only provided the initial funding but a shelf company from a previous venture called Rent-a-Bull which was renamed to TechnologyOne.

Cloud computing altered the way TNE builds, hosts as well as provides its software to customers. Its Ci Anywhere and the TechnologyOne cloud contributed towards the company’s robust and continuing growth in 2010 and onwards.

Xero Limited (ASX: XRO) is a provider of accounting software to small businesses over the cloud. Let’s know about its journey.