Consumers in the UK are increasingly worried about next year due to rising prices and increasing COVID cases. The GfK Consumer Confidence Index declined for a third consecutive month to minus 17 in October, reaching record low levels since February. Last month, the figures had dropped to minus 13.

Increasing fuel and food shortages, rising inflation and interest rates and growing COVID-19 cases are impacting consumer confidence. The gloomy consumer confidence outlook is expected to impact big-ticket purchases for the holiday season. Below is a detailed review of 3 retail stocks - J Sainsbury Plc, Morrison (Wm) Supermarkets Plc and WH Smith Plc and how may the lower consumer confidence impact their business prospects. 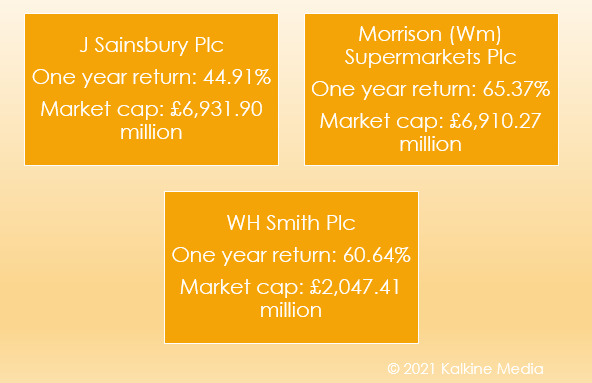 Sainsbury is a leading supermarket chain in the UK. The retailer announced the closure of its store in Craigavon and is expected to put over 100 workers jobs at risk.

Sainsbury’s total retail sales (excluding fuel) rose by 1.6%, and grocery sales increased by 0.8% in the quarter ended 26 June 2021. Its online grocery business registered 29% growth during the quarter. The company expects underlying profit before tax to reach £660 million for the financial year ended March 2022.

Morrisons is a company that operates a chain of supermarkets across the UK. The company recently accepted a £7 billion take over bid from Clayton, Dubilier & Rice (CD&R). The company also announced plans to cut down its online delivery service as consumer behaviour returns to pre-pandemic trends and growing in-store footfall.

WH Smith is a UK-based retailer that operates a chain of stores at railway stations, airports, hospitals and service stations. WHSmith announced the closure of its high street retail store in Gillingham in the New Year.