UK’s new car registrations declined by 35% year-on-year in September 2021 to 214,000 units, marking the weakest performance in the month in over 23 years, according to a report by The Society of Motor Manufacturers and Traders. The auto industry continues to be impacted by the shortage of semiconductors used in car manufacturing.

However, the shortage of fuel resulted in panic-buying at the petrol pumps in late September, thus boosting battery car registrations. In September 2021, the total number of battery-powered car registrations reached a record 32,000.

Licence plates of cars in the UK denote the vehicle age and need to be updated in March and September every year, implying that these are usually bumper months for car registrations; still 2021 turned out to be a disappointment for the car industry.

Below is a review of the three auto dealerships stocks in the UK - Pendragon, Lookers and Caffyns. 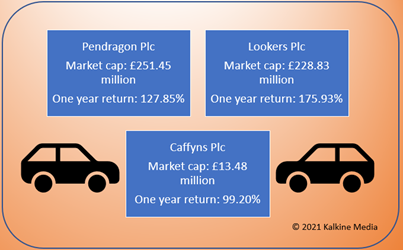 Pendragon is one of the largest automobile retailers in the UK. Recently, the company announced plans to roll out a used car proposition under the ZenCar brand. Pendragon reported an underlying profit before tax of £35.1 million in H1 2021 compared to a loss of £31.0 million in H1 2020.

Despite a decline in new car supply, the company continued to witness strong demand and order book during H1 2021. Nevertheless, it expects continued inconsistencies in supply to delay deliveries in the remaining part of the year.

The market cap of the company currently stands at £251.45 million, and the shares returned 127.85% in the last one year to shareholders.

Lookers is a UK-based car dealership and aftersales service chain operating in Ireland and the United Kingdom. Despite the COVID-19 pandemic, the company continued to register strong demand across its omni-channel network. The company intends to leverage the growing demand for electric vehicles in the coming months.

The market cap of the company currently stands at £228.83 million, and the shares returned 175.93% in the last one year to shareholders.

The market cap of the company currently stands at £13.48 million, and the shares returned 99.20% in the last one year to shareholders.