Flick through PPG Industries Inc. on a weekly chart

PPG’s prices started to move up after the formation of a Morning Star Candlestick pattern (bullish reversal) at the end of the correction phase. Prices witnessed more than 30% gain in the past 2 months and broke a rising trend line on the upside in the last trading session, indicating continuation of upside movement in the stock. The recent breakout is accompanied by good volume, further supporting a positive stance for the stock.

Currently, prices are trading around the lifetime high and as per the Fibonacci Price Projection, the next resistance levels appear at USD 174.50 followed by USD 184.50. On the lower side, USD 132.00 appears as the major support level for the stock followed by USD 116.00. 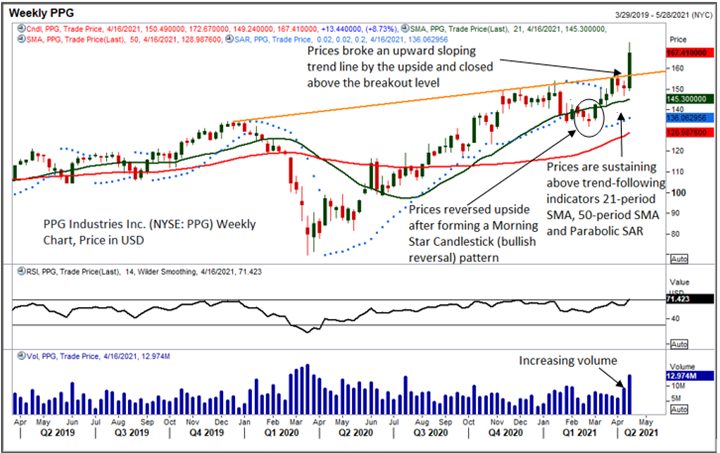 What are the Technical Indicators suggesting?

The momentum oscillator RSI (14-period) is trading at ~71 levels, indicating a positive trend for the stock but at the same time, it is also suggesting an overbought condition. Prices are continuously taking support of the trend-following indicator 21-period SMA and forming a positive crossover with another trend-following indicator 50-period SMA. Parabolic SAR is also sustaining below CMP and appears supportive of the stock prices. The summary of technical indicators is as below:

After analyzing the current price action coupled with the technical indicators, PPG Industries Inc. appears to be trading in a primary upward trend and getting support from several technical indicators. However, the leading indicator RSI (14-period) entered an overbought zone and as per theory this condition suggests that the prices could correct.