Trend analysis is part of technical analysis that tries to predict the future movement of a freely-tradeable asset upon incorporating the historical and the present price behaviour.

The rationale behind trend analysis is that what happened in the past is likely to be repeat in the future under the same circumstances.

Trends could be broadly categorised into three, i.e., long-term, or primary, intermediate, and short-term. Many famous technicians such as, Charles Dow, Ralph Nelson Elliott have built the foundation stone of trend classification through prominent works like Dow Theory, Elliott Wave Theory, respectively, in the field of technical analysis.

Charles Dow – the father of technical analysis was one of the first of the modern technicians to identify and write about the fact that markets trade in trends. The work of Charles Dow which was never formulated until Robert Rhea succeeded William Peter Hamilton in 1932.

The non-formulated work of Charles Dow further marked his way to the modern and most popularised theory of technical analysis known as the Dow Theory.

Dow Theory is basically built on three principles, which are as below.

Ideally, analysing a trend is rather simple and plain as compared to other advanced concepts such as Elliott Waves, Point & Figure analysis, of technical analysis.

However, it is considerably difficult in practice, and many mechanical trading systems which have remained profitable in the market, have been based on the rationale of jumping on a trend and riding it to its predictable or apparent end.

The Direction of the Trend

Defining the direction of a trend is one of the most import aspect of trend analysis and primarily, there are only three directional trends in the market, i.e., an upward, downtrend, and sideways (or consolidation). 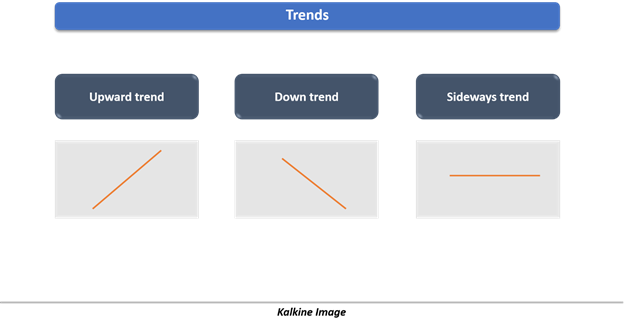 Generally, when prices of a security under consideration show peak and through at higher price levels than the immediate previous peak and trough, the trend is said to be an uptrend. The exact opposite of such a price behaviour is what is considered as a downtrend.

How to Identify the Direction of a Trend? 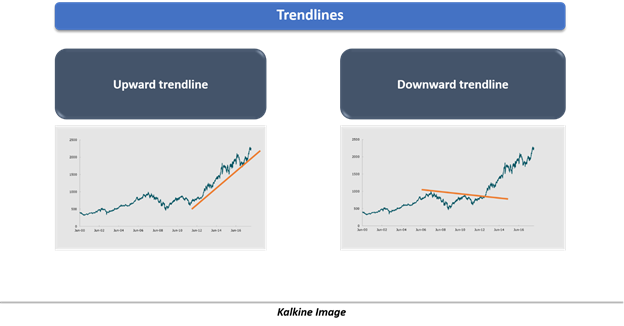 By far, the oldest and the simplest method for determining a trend is manually drawing a trendline on a price chart. The method primarily suggests connecting the price action over a time horizon under consideration to form a line on a chart by connecting either the highs of the price range or the lows.

Drawing a trendline on a price chart is a method which is often at the discretion of the individual analysing the chart.

Certain standard rules have been developed concerning trendlines for trend analysis, and some of the most widely known and used rules are as below.

Moving averages are one of the most successful methods next to trendlines used for identifying a trend. A moving average could be defined as a constant period average of prices calculated for successive periods.

Ideally a series of market events tend to hamper the price of security whilst increasing its volatility. Moving averages could be a very great tool in such matters as it tend to smooth the price fluctuations over a specified period.

Regression is ideally defined as a mathematical formula that can fit two dependent variables in a straight line, which is known as the regression line.

BA., CRH, CRDA: Is it the right time to invest in manufacturing stocks?

Why did Fortescue (ASX:FMG) share price close 3.8% up today?