What is a Moving Average?

A moving average could be defined as a constant period average calculated for each successive period interval. Moving averages are very useful in markets that have a tendency to trend, and they dampen the effect of short-term oscillations.

Moving averages are one of the most widely and conventionally used tools used in technical analysis to smoothen the periodic fluctuations in prices, and they ideally iron out erratic data, making it easier to determine the true underlying trend.

Many analysts/fund managers prefer to use longer-period moving averages such as 200-day to determine the primary trend in an underlying freely tradable asset.

Moving averages could be calculated and simultaneously plotted in a lot many ways on a price chart. Some of the commonly and widely used types of moving average are as below:

They believe so because, the closing price data points often avoid any vast intraday move like high and lows; thus, they are considered as most suitable for smoothing the price fluctuations. 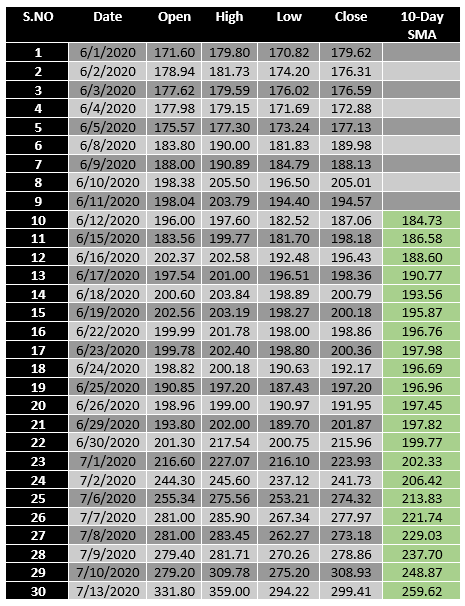 A simple moving average is created by summing a set of data and dividing it by the number of data points in the time frame being considered.

For calculation purposes, let us take a look at the recent price data of Tesla Inc (NASDAQ: TSLA), and for simplicity, let’s take the closing price as data point to calculate the 10-day SMA.

Likewise, the remaining weight, i.e., 81.82% would be allocated to the previous day EMA.

The general formula for calculating an EMA on any given day would be as below:

Furthermore, it should be noticed that the weight of EMA would change if we change the period under consideration. For example, instead of choosing a 10-day EMA, if we were to calculate 15-day EMA, the weight for the current day price would be 12.5% and the remaining 87.5% would be allocated to the previous day moving average. 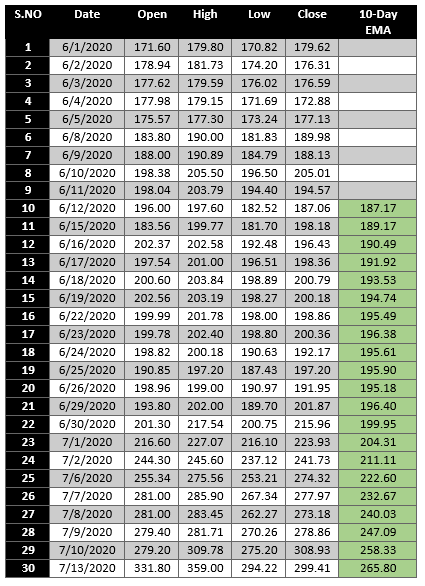 The Drop-Off Effect: SMA Vs EMA

A large change in the moving average due to the dropping of the earlier data could generate false trend signals; this effect is typically known as the drop-off effect.

To address the impact of the drop-off effect, a majority of analysts prefer using EMAs as they incorporate the earlier as well as the recent data into the calculation. It does so by simply allocating some weight to the earlier data set; however, EMA also gives higher weightage to the recent price action but does not totally ignore the earlier data.

GMA is a simple moving average of percentage change between the two data points.

The golden crossover is mainly associated with buy signals and represents a major uptrend while a death cross is mainly associated with sell signals and represents a change in an uptrend. Even fundamental analysts keep a close watch on 200 SMAs or EMAs as it is considered as a good moving average to conclude the strength of bulls and bears from long term perspective.

Canada snap election 2021: A quick roundup of all the key highlights

Time to move on and address these economic challenges, Mr Trudeau?

Robinhood users may soon be able to send, receive Bitcoins

What's next for Canadian real estate as Trudeau wins without majority?