Bull market is referred to as the scenario in the  stock market where the share prices are on upward trend or are anticipated to rise. It can also be applied to other assets such as currencies, commodities, bonds and real estate. 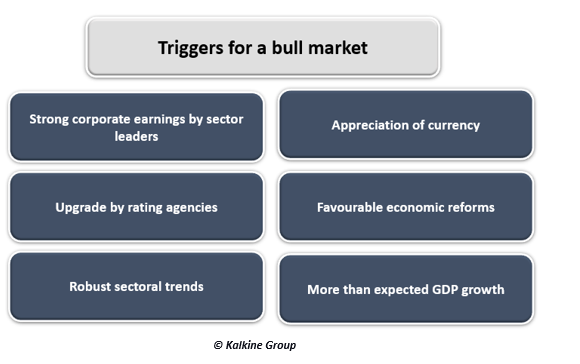 What is the Significance of Stock Market?

Whenever a business or a company is in need of excess funds for expansion or growth, it has primarily two options. First, to ask the private lenders or a few institutions for the humongous amount of money which has its own pros and cons.

The second option is to ask the general public with a small amount each to cater to this capital raising. Again, this method also has its own pros and cons. But it is a relatively preferred way primarily due to less concentration of management power going in a few hands.

When the company opts for the second option via IPO, it is essentially coming to the stock market.

So, what’s exactly a Stock Market?

But once the money has been channelized from lenders to the corporations, another major function of the market comes into the picture which is transacting the existing issued securities between lenders.

These securities can be traded between lenders at their own demanded prices.

Now, there are many intricacies in the stock market like primary market and secondary market, different types on securities that can be issued to raise money, regulations and legal structure to perform various activities etc. Here we are going to look at how the price of these securities move and how it triggers a specific direction of a bull market.

This price fluctuation works with respect to the basic economic law of supply and demand, which states the higher the price, lower would be the demand and vice versa. In other words, higher demand will increase the prices, and higher supply would decrease the prices.

How do we define Bull market?

There are a few times when the demand for a security or a broader market is so strong and consistent among the masses that it’s price keeps on increasing for an extended period of time. Although it is difficult to estimate the time period for which the market would rise, and there is no hard and fast rule as to the minimum time for which it should rise, a few months of consistent rise preferred.

The enthusiasm amongst buyers is so high that no amount of supply is able to withstand the excessive demand resulting in a continued increase in the price. The demand can be high due to sectoral trends, overall economic scenario, political uplift and overall investors’ sentiments.

What are Quantitative measures of a bull market?

Some quantitative measures are also available to measure a bull market in an objective way which does not take any discretion or less of it into consideration.

One such measure is to use retracements which does not take time into consideration but accounts for a set percentage of the price move.

What are the Triggers for a bull market?

As a bull market lasts for a few months/years, to say the least, the price rise does not take place out of thin air. There are quite a lot of strong positive fundamental changes taking place, backing up the excessive demand. It’s not in the hands of a few people to take the prices higher on their own for a long duration; definitely, mass participation takes place behind the scenes which generally comes on the back of some fundamental changes.

These changes could be

What are some of the Strategies to be used in a bull market?

When the market keeps on rising for an extended period, there are two basic strategies which one can use that are very effective in this kind of market.

This is a favourite strategy for the long-term investors who are not fond of frequent entries and exits based on the price, which a trader does. It essentially means to buy the stock and holding onto it for a few years till a significant drop is witnessed, or the fundamentals start to change.

When the market is in a bull run, and almost everyone wants to participate in this rally, a mere buy and hold strategy can do wonders.

In a bull market, almost every dip (correction from a peak) is bought into and the stock starts rising again. Rarely do we see a significant dip to enter the long position, but those dips are a sweet spot to enter an ongoing bull market. There are many ways to identify dips in a bull market by using indicators and other parameters to buy the stock or add more quantity on the way up.