Bear market is a scenario when the prices of securities are only moving in a downtrend for a prolonged period. Pessimism and fear across the board grips the market which leads to continuous selling pressure from the market participants, leading to downtrend.

Apart from stock market, Bearish trends can also be present in other markets such as currency, commodity or bond market. 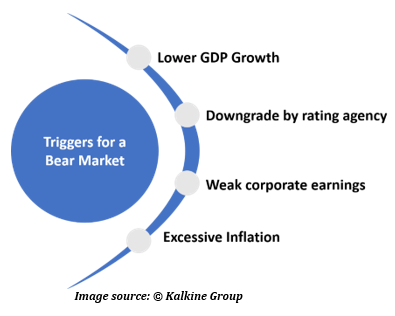 What Do We Mean by Stock Market?

The stock market or financial markets in general, which includes stocks, bonds, commodities etc,  is a virtual marketplace for buyers and sellers willing to make a deal. Every party has his/her own analysis/view or opinion about the underlying security regarding its worth with respect to what it may be worth in the future.

As the constant buying and selling of securities take place, the prices also fluctuate with respect to each of these transactions. This price fluctuation happens in either of the two directions, up or down based on the demand and supply equation.

In other words, where the price move would depend on whether the demand is higher than supply or is it the other way. If the demand for the security outstrips the supply, i.e. more no. of buyers is willing to buy than the no. of sellers who are willing to sell at that point of time, then the price tends to move up.

Similarly, if the no. of sellers is outnumbering the no. of buyers for the security at the same time, then the price tends to move down. All the price movement works on the universal law of demand and supply.

So, what is a Bear Market?

As the prices are ever-changing, often they are not random and tend to move in a particular direction. Sometimes, due to excessive pessimism and fear among the market participants, the supply of securities gets overwhelmingly high, which leads to a fall in the prices for a prolonged period. This continuous fall in the price for a long time, often a few months/ years is referred to as a Bear market. 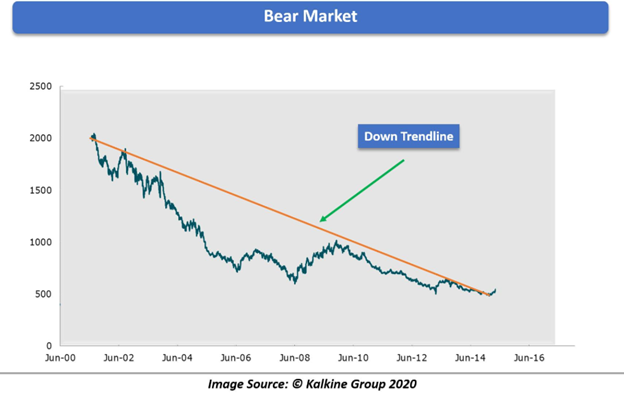 The secular bear market, which is a part of the stock market cycle, is often witnessed after a period of distribution which succeeds a strong bull market.

Although there is no estimate as to how long a bear market could continue, history tells us that often it lasts for a lesser time than a bull market but can be more erratic and fast during its fall.

What are the Triggers for a bear market?

This extended period of constant supply is not random and need a few reasons to sustain. These reasons are the major fundamental changes taking place behind the scenes. A few of these could be;

How is a Bear market different from a normal correction?

It is to be noted that the bear markets fall is completely different from the fall witnessed during an up-trending market. The market never moves in a straight line but rather in a wave-like pattern. This simply means even while moving up; it takes corrections or dips in the opposite direction and small rallies on the upside while trending down.

Therefore, a broader direction of the trend needs to be considered while identifying the bull or a bear market.

How to Quantitatively measure a bear market?

Sometimes it gets difficult to measure as to when a bear market has started or ended as the price is always moving and fluctuating. But there are some quantitative measures available that can do the job in an objective way.

One of the measures which are generally used for the broader market is to look at the retracement level. A retracement is a move which is opposite to the bigger trend. As discussed above, markets take correction while moving up and shows rallies while going down. These dips in an uptrend and rallies in a downtrend are the retracement move.

Which Strategies to be used in a bear market?

When the market or a stock keeps on falling for a prolonged period, then a few strategies could come in handy to survive bear market or even mark decent profits like;

As stated earlier, even in a downtrend, the market moves in a wave and shows some small rallies on the upside which ultimately get fizzle out, and the downtrend continues. These rallies are an ideal point for the short-selling as one can get a better price.

Going short just after the support level gets breached is another approach to make money in a bear market. Although selling the support would yield a lower price for selling but if the market is in a true bear run, then expect a lot of support levels to be taken out throughout the downtrend.

There is something for the long-term investors also. For an investor, a lower price is always a better price, and a bear market offers tons of opportunities to buy stocks dirt cheap. But the question is when to enter. One way is to look for a consolidation phase after a severe fall, also known as the accumulation zone.

It is the area where a lot of buyers come in to buy stocks at a low price, hence halts the prices to fall further. These consolidation zones are a good place to accumulate stocks, instead of trying to catch a falling knife.

The story of cryptocurrencies – past, present, future

Health Of the Australian Economy As Christmas Approaches

Are you saving enough? Here’s how to build a retirement fund

What e-commerce businesses need to know about cryptocurrencies?