Why is a falling knife so risky?

The price moves every second throughout the trading window and keeps doing so every next trading session. Therefore, price is always said to be in motion, it could either be an upward or downward movement.

When the price falls with very high velocity like what the world witnessed during the initial phase of Coronavirus pandemic, then this specific movement or price is said to be a falling knife.

This downward momentum is so strong that there is virtually no level where the price stabilizes until the fall is not ended. Every support level, major or minor gets hammered, and during the fall, no enthusiasm is seen from the buyers. Therefore, the sellers keep on selling the security even at lower prices, without enough buyers to absorb the entire supply.

Hence the downward movement is on till the sellers feel that the market has reached an oversold price level and stop selling further. This is when the fresh enthusiasm of buyers comes in, and prices start to move up.

What does it mean to “Catch a falling knife.”

During the course of severe correction in the market, it is tough to predict or estimate some support areas where the supply may end, and the price may halt. Trying to catch a falling knife means taking a very high risk and trying to buy the security at current levels in anticipation that the price would reverse from here.

In the normal conditions, generally more accurate estimates can be made as to from where the price may reverse but understanding the correct price at which one should buy in the case of a severe downtrend is not so easy. Therefore, if the timing goes wrong while buying the security, then the trader may not even get a chance to get out around the same price.

This situation is exactly like trying to catch a falling knife in the real scenario as in, if the knife keeps on falling after the intervention by your hand in an attempt to stop it, then it would probably cut through your hands.

What are the reasons for the occurrence of a falling knife?

The falling knife is a dangerous downward move which is accompanied by huge volume. That means mass participation generally takes place during these kinds of moves as moving prices with such a very high momentum cannot be a one-man show, especially in a liquid market like ASX200 or Dow Jones. 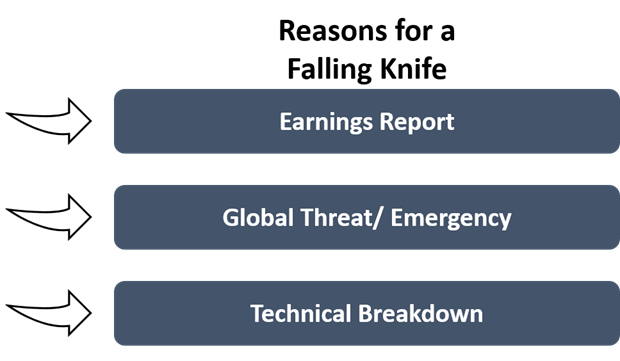 There could be many reasons which may instil a sense of excessive fear amongst the market participants, which ultimately triggers these moves. Here are a few examples of such reasons

Every quarter the listed companies declare their earnings report to the public. Every investor of the company has his own expectations with respect to the company’s performance. But not always, the company meets the investor’s expectation and sometimes leads to disappointment.

If the company’s performance is totally not acceptable by the investors, then it may also trigger excessive selling of shares which may last for a few weeks.

The most recent example of a global threat is Coronavirus pandemic. In the initial phase of the pandemic, during Feb and March 2020, the markets across the globe were depicting the exact movement of a falling knife. The fall was so intense that the only mechanism that was stopping the markets from falling further were the lower circuits.

Other global threat or emergencies like a terrorist attack, severe natural calamity etc. may also be the reasons for such aggressive downfall.

Technical breakdown refers to a break of a significant support level on the price chart.

Sometimes a major technical breakdown is enough to trigger a ferocious selling. This happens mostly after the break of long-term support or a firm support level.

These technical levels often provide a warning well before the breakdown, although may not always be correct, a trader can definitely become cautious after the breach of these levels.

How to profit from a falling knife?

The ideal trade to place during a falling knife is to go short on the security and follow the trend. Trend following approach may help even better if the trader could enter around the beginning of the move and ride the trend all the way to the bottom.

However, there is never the “only way” in the market, and there is another bunch of traders/investors who think the opposite and try to buy during the fall. This is called a mean-reversion approach because it is expected that if the price falls too much too quickly, then it tends to deviate from its mean price. These investors bet on the assumption the price would soon revert back to its mean by giving an opposite move.

A falling knife is a ferocious down move which is difficult to trade for both the short or long position. Traders need to have quite an accurate timing of their trades. If timing the move is done correctly, then a trader can make money both ways else it isn't easy.

For the new traders with less experience, it is generally recommended to sit aside till the calm sets in.