A yield curve can take different shapes depending on the economic cycle. It helps analyse the difference between the short-term and long term-bonds by displaying the yield offered on both. They are usually upward sloping because an investor who is willing to invest in a long-term bond must be compensated with higher yield.

What are the different types of yield curves? However, when there is a higher risk involved, then investors would want higher returns. Similarly, long term bonds reflect the fact that investors have put their funds on hold. These funds could have been put elsewhere over a long duration and thus, have an opportunity cost attached to them. Therefore, longer-term bonds have higher yields.

Also, a longer period means that the bond is susceptible to a greater number of uncertainties.

A normal yield curve exists when the economy is expected to grow at a normal pace, and in such cases, investors predict a steady economic growth.

High demand for capital is another feature of this phase of the economic cycle, which may lead to inflation. Investors locked into long-term bonds might fear that the returns they would receive on their investments would decline due to inflation. Thus, they start to demand higher yield on the long-term investments. 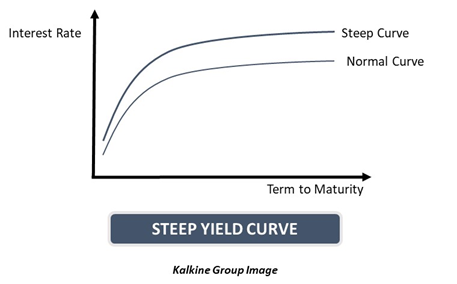 Long-term investments are expected to decline when there is an expectation of fall in inflation. An inverted shape of the yield curve represents an economic downturn or a stagnation on the economic growth.

These types of yield curves are rare and are counter-intuitive. An expectation of a recession in the future might lead investors to lock in the current interest rates as they are expected to fall even further. All along the curve, the interest rates remain low. These curves may sometimes be humped in the middle, as the bonds maturing in the medium term might offer slightly higher interests. Not all flat curves may transition into inverted curves. However, if the yield curve becomes flat, then it is important to be alerted about the possibility of a recession and the curve getting inverted.

Why are yield curves important?

Yield curves are visual representations of interest rates differing with maturity, and thus, they can be used to assess the economic stability during a given time. The shape of the yield curve can be used to alarm investors as well as policy makers about what shape the economic growth might take.

A yield curve also measures the risk that investors associate with the markets. The yield curves on government bonds are used as a benchmark to measure the economic stability. With proper knowledge and adequate experience, investors can use yield curves to determine where to invest.

However, it is important to note that yield curves are only a tool to determine the future shape of the economy and are not like a window into the future. It requires experience and expertise to make investment decisions based on yield curves. They can only be used for guidance.

Is Reef (REEF) crypto the most advanced EVM-compatible chain for DeFi?