In investing, R-squared signifies the percentage of a fund or security's movement that the benchmark index movements can describe.

The formula for R-squared is:

SSres is the sum of residual or the error

SStotal is the sum of average total

R2 is the goodness of best fit line.

Explanation of the formula 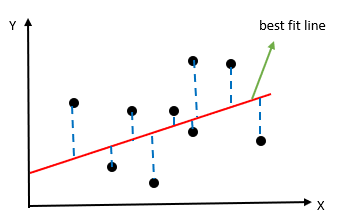 Next, we have to find the value of SStotal, which is the sum of average total. To get this value, we subtract the actual value from the mean of all the values. 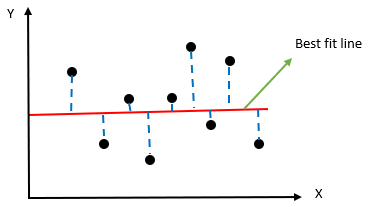 Step 2)  SStotal = ∑(y-yavg)2, where yavg is the predicted value and y is the actual value

After getting the value of SSres and SStotal, we equate the value to the R2 formula to get a value. After solving the equation, we would get the value between 0 and 1. The more is the value close to 1, the line is best fitted to the model.

In case the SSres value is above the SStotal value, we get the negative value of R2. If this happens, then we can say that the model you have designed is a waste model.

What does R-Squared say?

As highlighted above, the value of R2 ranges from 0 to 1 or between 0% to 100%. The closer we are to 100%, the more is the line fitted best to the model. Let’s consider an example where we want to study the movement of a particular security using R2. After calculating R2, if we find that the value is 100%, it means that all the movement of a particular security is explained entirely by the index movement.

Suppose we increase the number of independent variables or predictors to the regression model line. In that case, there are chances that the R-squared value increases and gives the user a provide user with an unwanted high R-squared value. It provides the user with the impression that the model which he/she has prepared is the best. However, the case might not be so.

Adjusted R-squared determines how reliable is the correlation between the variable and how much it is determined with the inclusion of the more independent variable.

How does Adjusted R-squared penalize you?

Adjusted R-Squared penalizes the user for including those independent variables that do not fit the model. Users generally include multiple data in anticipation of getting better results. However, how much the data is significant, one cannot assure. It might be possible that the significance is just by chance. Here, Adjusted R-Squared's use would compensate for this by penalizing the user for including additional variables.

Retail footfall in December may stay below 2019 levels: Stocks to eye

Why did Apollo Tourism (ASX:ATL) shares close up 27% today?