A patent is an exclusive right awarded to an inventor for innovation, process, or design for a comprehensive disclosure of the invention for a designated period. Patents are usually approved by Government agencies, like the USPTO (U.S. Patent and Trademark Office) in the United States. Patents are intended to protect the originality of the process, design or invention that is new and useful. A registered patent helps the inventor/owner exploit it commercially during the patent term. It even helps the owner license his right to others to use his innovation or even sell it. The only thing required to get a patent is a formal application to be lodged before the invention is publicly disclosed.

What is the process for patent application?

What are the different types of patents?

Commonly patents are classified as the following two types in accordance with the U.S. Patent and Trademark Office-

Utility patents- these protect the way working process of an invention that serves a purpose. It often lasts for 20 years, and often the inventor needs to pay a maintenance fee. It covers the following five categories of inventions under it-

Design patents- are granted for an original design for a decorative purpose or created to embellish a product. However, it is not granted to a purely two-dimensional design. These often last for 14 years but are not useable as functional items. These are granted for the design of an object and not the object.

What protection does a patent offer to its holders?

Patents protect a new product, composition or process and the aligned prospects of long-term commercial gains on it. Patents allow holders to have control overuse of the invention and its sale. Even after a competitor improves the original invention, a license or a patent purchase contract is required to exploit the improvement publicly or commercially. A patent also offers monopoly control for the duration mentioned in the registered patent. Only after the expiry of such period can the invention be used for making a profit. Patents provide protection and encourage further research, testing, other efforts, and spending to develop a new product, method, or process.

However, in return for such protection offered, the inventor must share know-how on the patent. Therefore, a detailed description of how it works must be made publicly available. It is essential as this information then becomes the basis for further research and subsequent inventions.

Why are patents important?

Patents are important because- 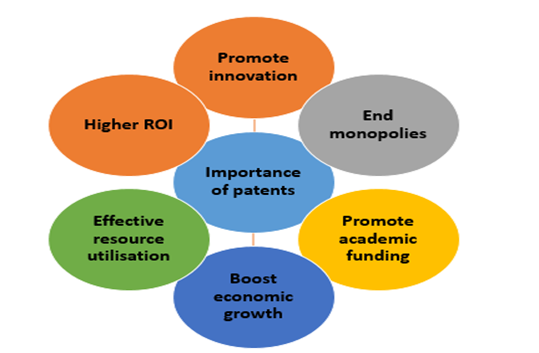 What are the pros and cons of patents?

Before going into patenting an invention or a process, one must consider the following benefits and drawbacks of patents-

Patents have the following benefits-

On the other hand,

How these technology stocks fared in September

Anson (ASX:ASN) shares are trading over 30% strong; here's why