What is the Hatch-Waxman Act?

The Drug Price Competition and Patent Term Restoration Act, or the Hatch-Waxman Act, is a legal framework authorized by the Congress in 1984.

The Act came into force to streamline the approval process of generic drugs and preserve innovation incentives and establish a procedure for litigation involving generic pharmaceuticals. The Hatch-Waxman Act established a legal as well as the economic foundation for the US generic drug industry.

The Act offers drug developers some protection while facilitating and giving incentives for companies to file an Abbreviated New Drug Application (ANDA).

Hatch-Waxman balance out between innovation and affordability. The Act also offers incentives to drug manufacturing companies for R&D of innovative medicines. Moreover, Hatch-Waxman offers affordability by developing an abbreviated path for generic drug developers to bring pharmaceuticals to market at a lower cost.

In the US, many top-selling prescription medicines are currently the subject of patent challenges by some generic firms seeking to enter the market under the Hatch-Waxman Act, some of them are-

What are the basics of the Hatch-Waxman Act?

The Act permits generic drug developers to file an ANDA incorporating the safety and effectiveness data submitted by the brand drug manufacturer. Only bioequivalence studies need to be added.  Moreover, generic manufacturers can develop and evaluate the product without any worries of an infringement action by the patent holder.

The Hatch-Waxman Act provisions are exclusively applicable to pharmaceutical patents and are distinct from infringement procedures related to the other patented products and processes.

New drug manufacturers were given protections in two ways:

Key components of the Hatch-Waxman Act 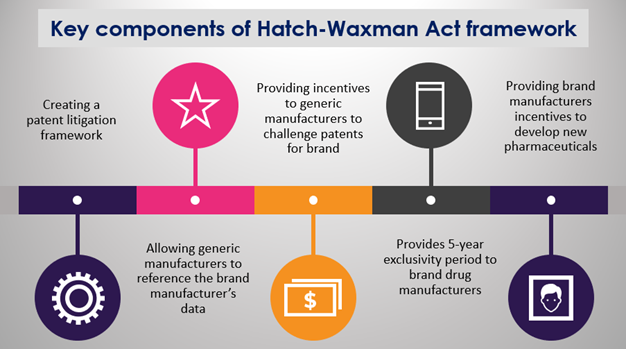 How does the Hatch-Waxman Act work?

Hatch-Waxman Act requires the pharmaceutical company to declare how the activities will relate to Orange Book-listed patents on drug’s marketing, before filing its ANDA.

According to the Act, a company submitting a new drug application (NDA) needs to provide the patent information of that drug in the Orange Book. This document offers generic drug developers an accessible list of approved drugs for which an ANDA could be filed.

Besides, a generic firm must certify its intentions to the FDA about each patent on the Orange Book for the generic drug it seeks to market.

There are four possibilities under the Hatch-Waxman Act:

What are the benefits of the Act?

The Hatch-Waxman Act has promoted innovation, fostered competition, and facilitated the US remains a leader in healthcare sector research and development.

With the Hatch-Waxman Act’s help, the US is the frontrunner in medical innovation, while balancing affordability and innovation, and promoting competition.

Moreover, the Act includes incentives for the manufacturers of both generic as well as branded drugs.

TSLA, NIO & 2 other EV stocks to keep an eye on

What pushed Vulcan's (ASX:VUL) share price up on the ASX today?

Can New Zealand’s investors invest in US stocks?

How to look for the hottest stocks in New Zealand?

Is Lake Resources (ASX:LKE) holding all the aces with advanced debt funding alternatives?

How is the travel sector coping with Brisbane lockdown wave?