What are Generics or Generic Drugs?

Generic drugs are copies of branded or innovative drugs that were developed by other healthcare companies. A generic drug is designed to be similar to already marketed branded medicines in dosage, safety, strength, route of administration, quality, as well as intended use. These versions are pharmaceutically equivalent to the brand drugs, also termed as patented drugs.

The similarities between a generic and a branded drug aid in proving the bioequivalence. Being bioequivalent indicates that a generic drug works in a similar manner & provides an identical clinical advantage as its branded counterpart.

In other words, a generic medicine acts as a substitute for the branded version. The active ingredients in generics are the same as that of the brand-name drug or an innovator drug.

Although generic drugs might not be associated with any single entity, these drugs are generally subject to government regulations in the nations where they are dispensed. 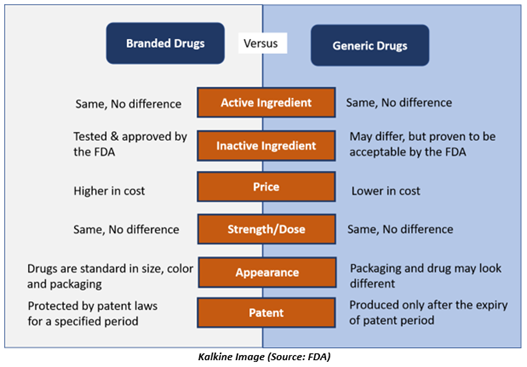 How are Generic Drugs Approved?

Similar to any other scientific and regulatory process, generic drug approval takes time.

The FDA requires time to review the complex information necessary to prove that a given generic drug can be substituted for the patented or brand drug that it copies. The time also depends on drug product complexity and the completeness of the application.

The application submitted to the FDA seeking approval should demonstrate that:

The Generic Drugs Program of the FDA performs a comprehensive review to make sure generic medicines meet all the requirements. The generic medicines that are approved by the regulatory agency are generally marketed after patents and exclusivities of the branded drug expire.

What is an ANDA?

For an ANDA, the applicants must scientifically demonstrate that their drug performs in a similar way as the innovator drug product. Once approved, the applicant can produce and market the generic drug to provide a safe, effective alternative to a branded drug it mimics at a significantly lower cost.

Companies manufacturing generics must provide supporting documents demonstrating that the active ingredient in generic drugs is similar to that of the brand drug, and FDA must review that proof. 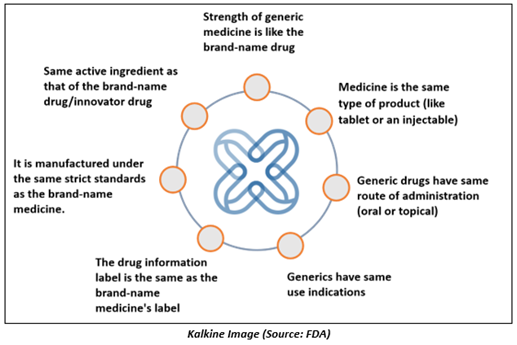 Why do Generics cost significantly less than the Branded Drugs?

Generic drugs become available only after a thorough review by the FDA and after a set period that the brand drug has been on the market exclusively. This is because new drugs are generally protected by patents that prohibit others from making as well as selling copies of the patented drug.

Generic drugs cost less than their branded peers because the applicants do not have to perform any animal study and clinical trials that were necessary for the brand-name drug to prove safety & effectiveness.

Are the side effects of generic drugs monitored?

After the FDA approves any innovative or generic medicine, the agency continues to investigate the safety of the medicine. FDA takes several actions to ensure safety as well as quality before and after the marketing of a new medicine or generics.

The staff of the agency examines drug products to make sure the medicines are safe and effective with high quality at all levels of the supply chain, from APIs to final products being marketed to consumers.

Any side effects are found during the investigations may lead to a change in the manufacturing process of the product (brand-name or generic counterparts). Because of restricted resources, the Food and Drug Administration is not able to operate separate clinical trials for generic drugs.