Internet of things, or IoT, is a network of physical objects that has sensors, software, and other technologies for connecting and exchanging data from one device to other devices or systems via the internet.

To explain this concept of IoT, let us consider an example. Suppose you read an article on the internet. It could either be through a desktop, laptop, mobile or a tablet. Now, how is it possible that we can read an article through these devices? The answer is simple. These devices are connected through the internet that facilitates reading articles.

IoT is quite a simple concept. It means connecting devices to the internet to derive significant benefits. 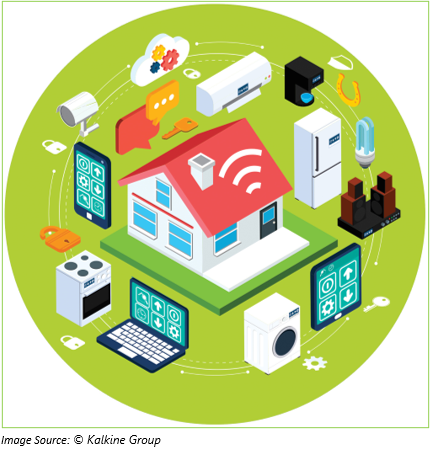 What are IoT devices?

IoT devices are the smart devices that support internet connectivity and can interact with other devices over the internet. 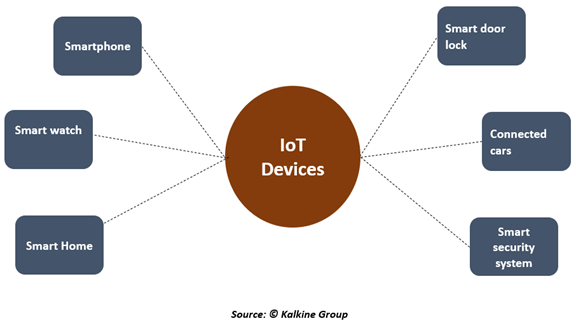 The concept of IoT was first discussed in 1982 with a modified soft drink vending machine, which became the first internet-connected appliance that was able to tell whether the loaded drink was cold or not.

Rexa Raji, in 1991,  introduced the IEEE Spectrum concept as moving tiny data packets to a big set of nodes to incorporate and automate each and everything from home appliances to overall factory. Kevin Ashton of Procter and Gamble coined the term Internet of Things in 1999.

The driving force behind IoT is the metal-oxide-semiconductor field-effect transistor, also known as MOS transistor, which was initially invented in the year 1959 at Bell Labs by Mohamed M. Atalla and Dawon Kahng.

For information, a metal-oxide-semiconductor field-effect transistor is the building block of most of the electronic devices in the present times like computers, smartphones, internet devices and many more.

In the 21st century, the scaling of  MOS transistor has been extended with advancement to reduce power consumption silicon-on-insulator semiconductor device fabrication, plus multi-core processor technology. It has resulted in IoT, which is being driven by the scaling down of MOS transistor to nano electric levels with lessened energy consumption.

How does IoT work and what makes them smart device?

There are two simple things that can convert a standard device to a smart device.

Once these functionalities are well combined, an IoT device is formed. A simple example of this is a smartwatch. Smartwatch not only tell you the time, but it also helps to track your health like a heartbeat, pulse etc. Some smartwatches alert the user about any phone calls as well.

What are the types of IoT Network?

IoT network refers to the collection of interconnected devices that connect with each other and does not require any human interference. These devices include smart appliances, autonomous cars etc.

The success and failure of any IoT network project depend on various factors. However, without proper connectivity between the devices, the sensors used, and the platform, the project could not start. Hence, it is crucial that there is a fair understanding of your application's requirements and accordingly select the network technology that fulfils the requirement. This section will look into different types of IoT devices along with the wireless protocol within each category. 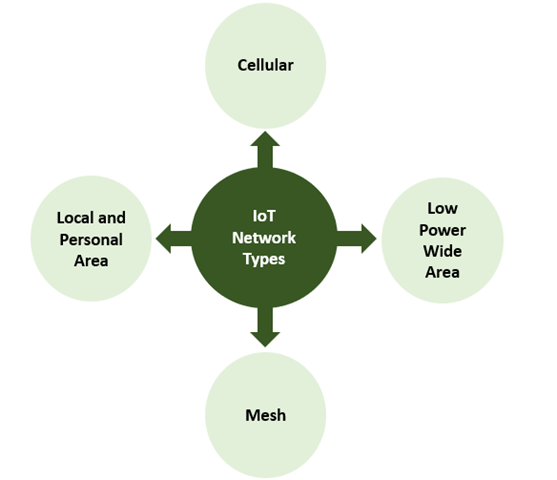 The cellular network uses a similar mobile network that is used by smartphones to allow IoT devices to connect. Earlier, these networks were designed specifically for devices like smartphones. However, these were not considered best for IoT devices. Hence to tackle this situation, the cellular industry developed new technologies that suited these IoT devices well. These wireless networks are pretty popular and are considered a reliable and safe method for IoT connectivity.

Under this network, two major wireless protocols are LTE-M and Narrowband IoT.

Personal area network and local area networks are those which cover a shorter distance. These are pretty cost-effective, but sometimes one might face a challenge related to data transfer as it might sometimes be unreliable.

Wireless personal and local area networks that we see usually included in the IoT connectivity solutions include Wi-Fi and Bluetooth. Through Wi-Fi, it is possible to run the applications within the local environment and in a set range. Also, a strong network is needed in case the applications are connected to Wi-Fi for devices to communicate.

As compared to Wi-Fi, Bluetooth is a much energy-efficient wireless network protocol. However,  it is slower than Wi-Fi and is limited in terms of sending the amount of data that it can send.

In this category, a popular and commonly used IoT network protocol is LoRaWAN. It runs on a long-range communication network. The most significant advantage of using LoRaWAN is that it consumes less power and has a relatively low-cost chipset.

In a mesh network, all the sensor nodes send data amongst each other to reach the gateway. An example of this network is Zigbee. Mesh networks have a short range and need more sensors across a building or repeaters to get the coverage of the application requirements.

It should be noted that the nature of this network is such that it requires high power consumption. One such example is smart lighting devices. Simultaneously, a mesh network is comparatively strong and is considered the safest and fastest mode to send data. Also, this network can be installed quickly and is famous for in-building usage.

What are the advantages and disadvantages of IoT?

While there are various advantages of IoT devices. Some of them are as below:

Despite so many favourable features of IoT, there are a few disadvantages as well. They include:

What has made IoT so important amongst people?

IoT has been amongst the most important technologies in the present times. Not only for household or daily uses purposes, but IoT also has not started gaining grounds at industrial levels. Various industries have now started adopting IoT technologies to improve their efficiency.

This innovative technology not only connect devices to the internet, but it also provides users other features like real-time analytics, cloud data storage, trigger action from a remote location, remote notification etc.

What Technologies have made IoT possible?

IoT has come into existence with the recent advancement in technology. Let us look at them one by one.

IoT in the present times have become more and more widespread, and various companies are capitalizing on the huge business value it can provide. Some of these are:

Rising Demand for AI in healthcare: A Glance at BRN, OPL and LBT

Neuralink: Why Are Investors Going Gaga For This Elon Musk Firm?

Two ASX telecom stocks that made a robust start to April 2021 – FSG, TPC

What you should know about Bitcoin mining

Prosus To Reduce Stake In Tencent To 28.9%