What is a Digital Oilfield?

Digital Oilfield, according to the terminology, is not only about sensors and screens installed on an oil and gas field. It is a concept of integration of the business processes with digital technologies and to automate the workflows.

It allows a company to reduce human interference and minimize the risks associated with oil and gas operations. The flow of data and information is rapidly integrated with the analysis interface, allowing timely and best available decisions for the operation.

How are companies leveraging with smart technologies on the oilfield? 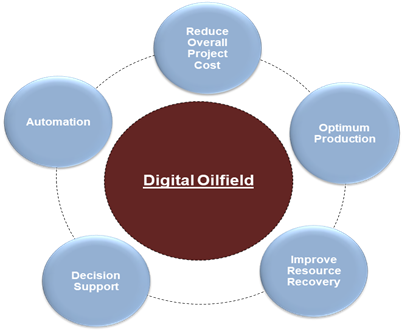 The upstream oil and gas sector has been a laggard in implementing digital technology. However, the approach towards digitalization has changed in recent years. As a result, a multibillion-dollar industry has emerged to make the oil and gas fields “smart”.

Digital Oilfield integrates multiple data with the analytics tools or applications for knowledge management and decision support system. It allows automating the workflow and helps in remote monitoring of the processes and operations.

The lower crude oil price environment has forced the upstream companies to adapt to the digital oilfield concept to increase efficiency and boost production. Emerging technology trends, including IoT, Big Data, Artificial Intelligence, along with other innovations in technologies, are extensively being used in modern-day oilfields.

The next big question - How do they do it?

Upstream oil sector’s operations can be broadly divided in to:

The digital oilfield technology is being implemented mostly to the drilling and production operations. For any oilfield, production is a continuous and closely monitored operation as it generates the revenue. No one wants to lose any of their production.

The technology enables the company to monitor the production data with advance analytics closely, and decision-making system can predict the possible next work-over jobs on the oil wells. The sensors on the well control unit can monitor the hazardous gas leaks, water production or field tank levels.

The cloud computing system, through its storage and immense data processing capabilities, offers smart intelligence and production planning of oil wells. During the lifecycle of a well, its pressure drops due to depletion in oil and gas volumes in the reservoir. The installed smart technology could help in better planning of any possible production cuts in future.

The next major application of the data-driven approach is in drilling. Since the era of easy oil has gone, companies are entering into deeper zones, both on land and sea. Drilling in deep offshore is an extensive capital endeavor which involves a very high risk of human life and environmental losses.

The Deepwater Horizon Gulf of Mexico accident took place during the drilling operations. The well flowed continuously for many days leaking thousands of barrels of oil in the sea. The oil spillage cost BP nearly $20 billion as penalties, and 11 people lost their lives in the accident.

Since the nature of the job and risks presents at the oilfield has made companies realized that the lesser the number of people on-site, lesser would be the causalities. The real-time data monitoring application has helped in reducing the workforce from the site.

Companies, in most of the cases, outsource the real-time data monitoring work to specialized firms who have competence in smart tools and applications. They monitor the data coming from the drill site and keep a watch on the well trajectory, mud pressure, and various other parameters, to govern safe and accurate drilling of the well.

There was a reservation for using the smart well technology or Digital Oilfield among the oil companies as they did not want to increase their operational cost by installing sensors and data analytics centre. But technology has taken a huge leap and provided solutions that were not available before.

For instance, digital technology can provide simulations for various case scenarios related to the production or reservoir behaviour pattern. The operator, or the decision-making body, can take a call based on the most optimum solution. This has helped cut down the overall project costs.

In a nutshell, digital oilfield is a concept to integrate technologies like artificial intelligence, cloud computing and data analytics. The processed information is then channelized towards the intended receivers.

ICON (ICX) is a cryptocurrency or a form of digital asset that allows multiple blockchains that includes other cryptocurrencies to exchange information via ICON's central node.

What are GAFAM Stocks? GAFAM Stocks are perhaps the most famous and sought-after stocks of the last decade. The dominance of these companies during the 2010s in the stock market will be remembered in the books and adages.  It is the creation of market participants that develop acronyms like GAFAM, which include five large American companies having dominance across most jurisdictions. GAFAM stands for Google, Apple, Facebook, Amazon, and Microsoft.  Over time these companies have gained dominance in their primary business. In addition, GAFAM stocks have been aggressive in expansion and entering new verticals.  Although there have been considerable acquisitions along the way, the investments in research & development and innovation have been at the forefront of the capital expenditure plans.  Google Officially known as Alphabet Inc., ‘Google is not a conventional company’ is a statement made by its founders in their early letters. It has not been a conventional company, indeed. Google has developed significant networking within its products.  As a dominant search engine of the world, Alphabet reaps large revenue through advertisements through its flagship search engine and other products. Over the years, the company has been able to expand in other verticals such as mobile phone operating system – Android, web browser through Google Chrome.  Alphabet has two operating segments. Under Google, the company houses Search engine, YouTube, Search, Google Play, Google Maps, Android, Chrome, hardware, Google Cloud.  In other bets, the company includes businesses that are not material individually. These businesses include Calico, Verily, Waymo, CapitalG, GV, X and more. Almost all revenue of Alphabet is derived by Google segment.  In 2019, Alphabet recorded revenue of $162 billion, and around $161 billion was derived from Google segment. Operating income of the company was $34.2 billion, while net income of the company was $34.3 billion.  Read: Unboxing Revenue Growth Streak of Google and Microsoft Apple  Established in 1977, Apple Inc. is a consumer electronic company engaged in manufacturing of various consumer products. Apple mobile phones are renowned across the world, and it also makes personal computers, wearables, tablets, and accessories.  iPhone is the flagship mobile operates on an in-house developed iOS operating system. Mac is a brand for its personal computers that are also used extensively across the professional domain. iPad is a line of tablets, which run on iPadOS.  Apple also sells other wearables and accessories that include Apple Watch, Apple TV, Beats products, iPod Touch, Airpods. The core strength of the company has been its capability to innovate and launch products continuously.  iCloud is its cloud service, and data of its products can be stored in the cloud. As a consumer business, it markets are focused small individual customers that do not constitute a material portion of revenue individually.  In 2019, Apple recorded revenue of $260.2 billion. Its operating income for the period was $64 billion, while net income was $55.25 billion.  Facebook  Facebook Inc. was established as a social networking website and has grown tremendously due to its strong networking effects. It enables people to connect with each other or in groups. Facebook is used in mobile phones, personal computers, handsets etc. It has been a great place to share opinion, ideas, videos and photos. With its large user base, Facebook and its products are used for advertisements. The traditional modes of advertisements have lost significant market share to companies like Facebook.  Instagram is also a part of Facebook. It is used by people across the world to share photos and videos. It also offers a similar type of services like Facebook and has emerged as a networking platform for digital creators and influencers.  WhatsApp is a messaging mobile phone application. It allows people to connect privately and is extensively used by people. Messenger is another application by Facebook that enables people to connect with family, friends, groups and businesses.  Oculus is the hardware business of Facebook that helps to connect people through its virtual reality products. A major portion of revenue is generated by marketing and advertisement through its products that are used by large scale potential consumers.  Watch: Facebook launching 'Shops' on its social Media Platform | Market Update Amazon Amazon.com, Inc. was established as e-commerce in 1994. The company serves consumers, sellers, developers, enterprises, and content creators. Amazon also provides advertising services to publishers, sellers, vendors, publishers, and authors.  It serves consumers through its online and physical stores. Amazon offers a range of categories and is has a strong online retail presence. It has been engaged in manufacturing consumer electronics such as Kindle, Fire TV, Fire Echo, Alexa, Ring etc.  Amazon Prime is a membership of the company that provides shopping benefits, streaming of entertainment content, including movies, original content. It intends to provide customers with low prices and home delivery of goods.  It also enables sellers to access Amazon marketplace, which includes stores and online website. Amazon earns through a percentage of sales, fixed fee, combinations etc. Amazon Web Services offers cloud service to a range of public and private enterprises to store data.  Kindle allows content creators to publish and sell content/books on Kindle and earn a royalty on sales. In 2019, the company recorded net sales of $280.5 billion. Operating income for the year was $14.54 billion, and net income was $11.59 billion.  Microsoft  Microsoft Corporation is a technology company that develops software, services, devices and solutions. Its products are extensively used by businesses and individual customers to operate personal computers.  Microsoft’s platforms allow improving small-businesses productivity, educational outcomes, driving competitiveness of large businesses. As a platform and tools provider, the company empowers enterprise and organisations of all sizes.  Now it is emphasising on innovation for the next phase of computing stage. Other than its legacy operating system, Microsoft provides cloud-based solutions, services, software, platforms, content, server applications, desktop management tools, software development tools etc.  It also designs and manufactures and sell devices, including gaming consoles, PCs, tablets, entertainment consoles, and related accessories. In 2020, the company recorded revenue of $143 billion. Operating income for the year was $53 billion, and net income was $44.3 billion.

5 LSE Tech Stocks One May Consider for Long-Term Investment

Indian IT ADRs more than double in 1 year

Which ASX companies are on an acquisition spree?

2 Tech Stocks on a Roll Despite Pandemic Uncertainty

How These 2 Healthcare Stocks Performed Amid Pandemic Challenge

2 Canadian IPOs To Look Forward To